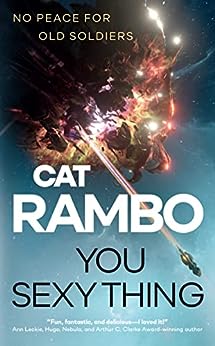 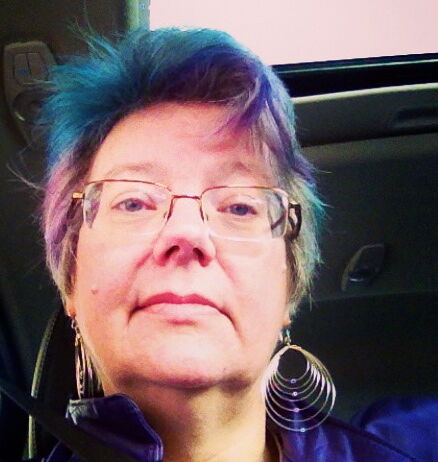 Just when they thought they were out…

TwiceFar station is at the edge of the known universe, and that’s just how Niko Larson, former Admiral in the Grand Military of the Hive Mind, likes it.

Retired and finally free of the continual war of conquest, Niko and the remnants of her former unit are content to spend the rest of their days working at the restaurant they built together, The Last Chance.

But, some wars can’t ever be escaped, and unlike the Hive Mind, some enemies aren’t content to let old soldiers go. Niko and her crew are forced onto a sentient ship convinced that it is being stolen and must survive the machinations of a sadistic pirate king if they even hope to keep the dream of The Last Chance alive.

An Amazon Best Science Fiction and Fantasy of 2021 pick!

"Cat Rambo's writing is everything you could hope for―lyrical, emotional, funny, by turns or all at once." ―Django Wexler, author of Ship of Smoke and Bone

"Cat Rambo is a genuinely gifted writer."―Saladin Ahmed, author of Throne of the Crescent Moon

"A romp. If you’re the kind of person who likes Mass Effect, or enjoyed Valerie Valdes’s Chilling Effect and Prime Deceptions, or fell head-over-heels for Tim Pratt’s Axiom trilogy... then this book is definitely for you. This is a fast, zippy novel that hides some surprisingly substantial emotional heavy lifting under its hood." ―Locus

Cat Rambo (they/them) is an American fantasy and science fiction writer whose work has appeared in, among others, Asimov's, Weird Tales, Chiaroscuro, Talebones, and Strange Horizons. A graduate of the Johns Hopkins Writing Seminars, where they studied with John Barth and Steve Dixon, they also attended the Clarion West Writers' Workshop. They are currently the managing editor of Fantasy Magazine. They published a collection of stories, Eyes Like Sky And Coal And Moonlight, and their collaboration with Jeff VanderMeer, The Surgeon’s Tale and Other Stories, appeared in 2007. They live and write in Washington State, and “Cat Rambo” is their real name. --This text refers to the paperback edition.

Cat Rambo lives, writes, and edits in the Pacific Northwest. Their work has appeared in such places as Asimov's, Weird Tales, and Strange Horizons. They were the fiction editor of award-winning Fantasy Magazine (http://www.fantasy-magazine.com) and appeared on the World Fantasy Award ballot in 2012 for that work. Their story "Five Ways to Fall in Love on Planet Porcelain" was a 2012 Nebula Award finalist.

John Barth described Cat Rambo's writings as "works of urban mythopoeia" -- Rambo's stories take place in a universe where chickens aid the lovelorn, Death is just another face on the train, and Bigfoot gives interviews to the media on a daily basis. Rambo has worked as a programmer-writer for Microsoft and a Tarot card reader, professions which, they claim, both involve a certain combination of technical knowledge and willingness to go with the flow. In 2005 they attended the Clarion West Writers' Workshop.

Rambo has over 250 short stories published and has been shortlisted for the Nebula, Compton Crook, and World Fantasy Award. In 2020, their novelette CARPE GLITTER won the Nebula Award. In 2021, they published fantasy novel EXILES OF TABAT (Wordfire Press) and space opera YOU SEXY THING (Tor Macmillan)

A frequent volunteer with the Science Fiction and Fantasy Writers of America, they are a former two-term President. They run popular online writing school The Rambo Academy for Wayward Writers.

Amazon Customer
5.0 out of 5 stars Wild Ride of a Space Opera
Reviewed in the United States on November 28, 2021
I thoroughly enjoyed this wild, clever ride of a space opera! It was a true fun treat to read, just what I needed this weekend. I wish I had the next book in the series right now because I am totally taken by this motley crew of characters that Cat Rambo has created, each written so vividly. Remember what the Grandfather in The Princess Bride movie says about the book right before he begins reading? Well, this action-packed plot has it all too — a band of heroes, mystery, a bio-sentient spaceship, pirates, fighting, explosions, prophecy, a touch of unrequited love…and cooking!!! Cat Rambo really knows her craft. Can’t wait to see what adventure happens next.
Images in this review

D.G.
5.0 out of 5 stars Masterful, Surprising, Heartwrenchingly Sweet
Reviewed in the United States on December 2, 2021
Verified Purchase
I am a fan of Cat Rambo's short fiction and Tabat books, so I eagerly anticipated this release. Cat's worldbuilding very rapidly falls into place around the framework of food and the business of restaurants, with the stranger elements of life in space and inter-species interaction keeping the familiar rich with new and surprising details, the wry and humorous characters and observations very much like reading social commentaries like Austen. The omniscient third person POV is used absolutely perfectly to achieve this, without any confusion as to whose mind or perspective is being explored in any given moment. Even the least likable character become known and their role becomes so crucial through the whole story that I found myself invested in everything. The plot is surprising and compelling, and I found myself unable to put it down so I could find out what happened to the this motley bunch. If you love food, found family, and space opera, this is will be a must read book for you.
Read more
5 people found this helpful
Helpful
Report abuse

Barbara Warden
5.0 out of 5 stars Brilliant queer space opera!!!!
Reviewed in the United States on December 8, 2021
Verified Purchase
This is how you do it. Vivid, unforgettable characters, plenty of action, and found family. I loved every minute of it. Adventure!
Read more
5 people found this helpful
Helpful
Report abuse

Nicole M White
5.0 out of 5 stars Quick, immersive read full of fantastic characters
Reviewed in the United States on January 8, 2022
Verified Purchase
I'm normally not a sci-fi reader, but this book had me wanting more. It's a fast read, but takes little time to build into. The characters were interesting and the story unique. While I'm not much of a sci-fi reader, I have played Mass Effect many times over and felt this book shared similarities that I enjoyed. The only con is wondering if/when the character stories will continue in a follow-up book.

I woukd highly recommend if you are both a novice sci-fi reader or an enthusiast looking for a unique story.

John E. Clark
5.0 out of 5 stars A delightful space opera
Reviewed in the United States on December 7, 2021
Verified Purchase
I am an absolute sucker for special ship + interesting crew stories. I really hope this is the first of many.
Read more
2 people found this helpful
Helpful
Report abuse

Dehypnotist
5.0 out of 5 stars Fine Fun Read
Reviewed in the United States on July 30, 2022
Verified Purchase
It seems that good-being adventure F&SF is becoming a thing! This is a great example, with echoes of Ian Banks, Becky Chambers, bits of Brin, echoes of Sturgeon... Loved it and can't wait till the next spiral of the story (which is surely planned). Makes me proud to be a fellow Nortwesterner!
Read more
Helpful
Report abuse

The Evills
5.0 out of 5 stars excellent spacefaring fun
Reviewed in the United States on July 8, 2022
Verified Purchase
If you’re a fan of Becky Chambers’ Wayfarer books, scroll back to buy as fast as you can — you won’t regret it.
Read more
Helpful
Report abuse

Michael Hobbs
5.0 out of 5 stars A great mix of humor and depth make this a great Space Opera
Reviewed in the United States on January 31, 2022
Verified Purchase
This novel is filled with characters you want to spend time with, in an adventure not of their own making that is filled with unexpected twists and dangers. Also, a great tribute to chefs and AIs. A very fun read that is reminiscent of Terry Pratchett in having gems of philosophy hidden in the metaphorical vegetable crisper.
Read more
Helpful
Report abuse
See all reviews