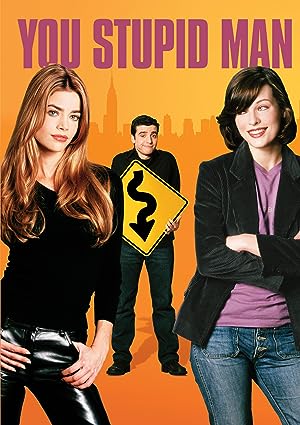 (25)
5.81 h 34 min201613+
Owen's girlfriend Chloe dumps him for a guy who “puts the beef in beefcake," and he plunges back into the dating world. Just as Owen picks up the pieces, Chloe wants a second chance.

Only-A-ChildReviewed in the United States on September 5, 2009
3.0 out of 5 stars
For the "Annie Hall" - "When Harry Met Sally" crowd
Verified purchase
If you are thinking of renting or purchasing this film, be advised that the promotional poster and DVD cover is deceptive. Denise Richards does not appear in those black leather pants or in any outfit that is particularly hot. On the other hand 2001 was the absolute peak of her attractiveness. She was into a serious fitness thing which brought her weight down, doing very good things for her face. And she was a good fit for the role, which capitalizes nicely on her Jane Russell/Megan Fox type negative charisma; and on Richard's own general vacuity.

The other casting choices were not as good. Writer/director Brian Burns is trying for the "Annie Hall" - "When Harry Met Sally" crowd and wants David Krumholz (Bernard of "Santa Clause" fame) to sell himself as a Woody Allen like nebbish in the middle of a love triangle with two extremely beautiful women. Unfortunately this oily actor looks like the sort of guy who would proposition your 14-year old sister. Not anyone you want to identify with nor anyone who brings out your sympathy vote.

Milla Jovovich is a talented actress who has appeared in way too many bad films; most much worse than this one. She is hopelessly miscast physically in "You Stupid Man" where her character's plainness is supposed to contrast with the dazzle of Richard's character. Despite this she manages to sell her character; although you never remotely buy into her love for "Meet Me in St. Louis"; her rendition of "The Trolley Song" is genuinely painful. If you are a fan of that classic musical I suggest giving "You Stupid Man" a wide berth as Burns makes it the awkward leitmotif of the Krumholz/Jovovich relationship (insert "yuck" here).

Burns has written a decent script, a little light on comedy or at least comedy that works, but its social commentary gets high marks. Too much of a NYC consciousness probably hurts this thing with a national audience.

Then again, what do I know? I'm only a child.

AlReviewed in the United States on April 26, 2011
5.0 out of 5 stars
What a Talent
Verified purchase
David Krumholtz comes across as somewhat superficial. It seems that he is reading a prompter. Still, overall it is a great movie mostly because Milla Jovovich does so well. People who see Milla in movies like Resident Evil or The Fifth Element are likely to think that Milla has the ideal prsonality for high action heroine roles. But people who see her in You Stupid Man are likely to think she has just the right personality for romantic comedy. People who see her in Million Dollar Hotel or Stone, or The Messenger might get a completely different take on her talents. She's extremely gifted. I don't think anyone else in show business could be nearly as convincing as Milla in all these varied roles. Betty Davis and Katherine Hepburn were great actresses no doubt. But no one in the motion picture industry has ever been as captivating as Milla. In "You Stupid Man" Milla may be at her most lovable. It would be a toss up between "You Stupid Man",and her other roles in "Stone" and "The Fourth Kind". From her rantings to her silent treatment to her singing, she's everything that is so beloved about womanhood.
5 people found this helpful

Uncle ChinoReviewed in the United States on August 18, 2009
4.0 out of 5 stars
Milla at her sweetest
Verified purchase
This was a good movie and there was some real chemisty between Milla and her awkward nerdy leading man who has a good heart but keeps putting his foot in his mouth. Baldwin and Denise Richards are an after thought and could have been played by anybody. Milla is the star and is perfect in this kind of role. This movie should have been released in the theaters in the states. She is a sweety.
3 people found this helpful

Wally CongerReviewed in the United States on June 1, 2006
3.0 out of 5 stars
Milla Jovovich shines!
Verified purchase
Sure, it's derivative. You've seen this story before. Maybe a hundred times. But this differs from the rest of the romantic comedies for one very big reason -- Milla Jovovich.

Jovovich is utterly charming throughout this movie. Until now, I knew her as a sci-fi action star and gorgeous model. But she shines in this film. Even when she's muttering the silliest lines fed to her by this so-so, been-there-done-that script, Milla is the "real deal."

I give this movie just three stars (based fully on Milla Jovovich's performance). She's so good, and I adored her so much in this movie, that I might just add it to my DVD collection. Even with only three stars.
17 people found this helpful

MikeReviewed in the United States on March 27, 2014
4.0 out of 5 stars
Milla is great in this movie!
Verified purchase
All I can say is that the presence of Milla in this movie makes it a good movie. If not for her great performance I would only give this movie 2 stars.

KFosterReviewed in the United States on November 13, 2013
2.0 out of 5 stars
OK
Verified purchase
The film was decent- it is the typical romantic formula: girlfriend breaks up with guy, he is devistated, meets "the One", then almost blows it by pining after the other girlfriend who treated him badly.
I just feel the chemistry between the actors was not there. I didn't believe the main actor as a strong leading man for the role.

charles leyrerReviewed in the United States on February 12, 2014
3.0 out of 5 stars
YOU STUPID MAN
Verified purchase
I THOUGHT IT WAS JUST OK
BUT NOT EVERY MOVIE IS GOING TO
WOW EVERYBODY BUT SHE IS STILL VERY PRETTY
MILA JOCHOVICH

sherylReviewed in the United States on January 3, 2016
2.0 out of 5 stars
Best forgotten
Verified purchase
Bad movie all around.
See all reviews
Back to top
Get to Know Us
Make Money with Us
Amazon Payment Products
Let Us Help You
EnglishChoose a language for shopping. United StatesChoose a country/region for shopping.
© 1996-2022, Amazon.com, Inc. or its affiliates