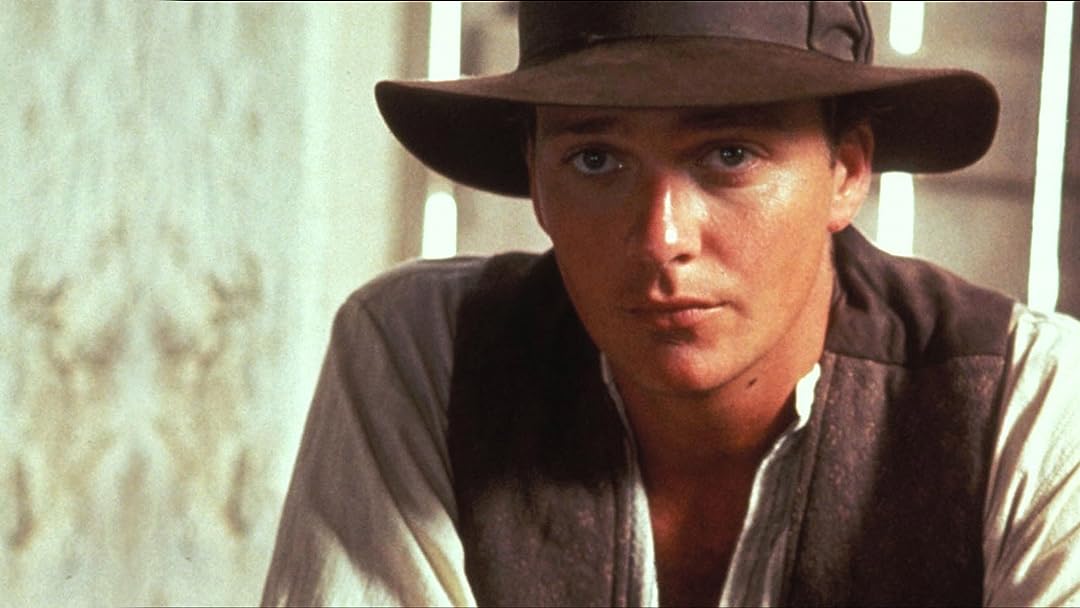 VoilaReviewed in the United States on June 28, 2016
5.0 out of 5 stars
Genre defining prequel & precedent-setting multi-generational filmed on-location hero-mythologies: "Indiana Jones Style"
Verified purchase
First, I rarely review films or series so please forgive me if I review strangely, I'm not formal when I do type a review. Indiana Jones introduced me to the fantastic world of archeology and preservation when I was just a little kid. Harrison Ford & George Lucas have kept my attention with the Indiana Jones films and influenced my blossoming scientific-"perspected" respect of learning from our planet's rich nature, Indiana Jones "gave me the OK to dig" in to the historical record with a big question mark on anything that has ever been stated to be fact when based on a measurement by man, those are big lessons to learn at an early age, to know scientific inquiry! I learned so much from these larger-than-life stories while refining my life, I'm thrilled to be able to look forward to the next installment of Indiana Jones in 2019 AND insist that anyone whom is a fan of Indiana Jones, of Harrison Ford and, I bet the Star Wars' fans too, will find & feel the sense of wonder within facets of original exploration with the stories from this thoughtful and thrilling franchise. He gets to hang out with Picasso in Paris! That being said, when you want to know and understand "ALL THINGS INDIANA JONES", if you haven't watched one of the franchise's films, definitely start your journey with "The Young Indiana Jones Chronicles"! More importantly, the order in which you watch this story, I highly recommended that you start from the beginning, the earliest year, and in order... Release dates and production schedules can skew series episodes' order so make sure to check the episodic timing events to ensure you're watching as the Lucas intended, that advise makes these shows most enjoyable. 'Because' George Lucas weaves today's stories throughout each episode & film, making them all current and relevant.

Ok, there are two episode guides for watching this series on Amazon and I found it challenging to figure out which is which on Prime so I turned on the series and sat down to type this review to place the order where I can refer to it when I send the links to my family members, giving them a "heads-up" that the order is slightly different, which is completely fine! I'm glad the series is on Amazon Prime! Amazon makes watching a brilliantly executed heroic-tale quite enjoyable, by using Amazon Prime Membership.

This series is a BIG-BUDGET series, filming on-locations with a wealth of discovery from country to country and culture to culture. Watching an original story such as "Indiana Jones" is very much intended to be seen on a LARGE TV (OR CINEMA) SCREEN if at all possible, to be able to see the ACTUAL ON-LOCATION SCENES woven into the stories as characters, indeed a rare treat in a wonderful niche-genre ! EXCELLENT!

They don't make'em like this anymore so if you haven't watched this series and you're an Indiana Jones fan, this review is certainly one to copy/paste so that you keep the series' episodes in proper order. You and your entire family can rest assured George Lucas created this for any age and culture.

This series is important for any Indiana Jones fan to watch and learn as this series uniquely (unprecedentedly) explains the orijen of our favorite "Hero-Archeologist" spanning eras. Not many story tellers can create multi-generational stories and keep pace like George Lucas.

The acting is excellent, much of the adventures in "The Young Indiana Jones Chronicles" includes explanatory adults to tell the stories for any person's age/generation entertainment ranging from 10 to 100+ years of age. Somewhat cerebral in the first few episodes as the world is being introduced to Indy & Indy is being introduced to different people and cultures.

The order in which the episodes are re-arranged correlate with the "press" distribution in which a total of twenty-eight episodes were produced by Paramount Pictures and Lucasfilm. The series was partially released in other formats and sold with and without the film "trilogy". Four TV movies based on the series aired on The Family Channel from 1994 to 1996. In 1996, the Young Indiana Jones Chronicles and the Family Channel TV movies were edited into twenty-two feature-length episodes; a new series known as The Adventures of Young Indiana Jones. The series was partially released in various formats, again, with more episode inclusion in 1999, and was then released in its entirety throughout late 2007 and early 2008. Subsequently, chapters and their "air" dates, with global distribution, were packaged together, as well as, packaged separately from other episodes and with and without the feature films resulting in the chronological order being slightly disrupted in some markets. In some territories, certain episodes were split or combined under different titles.

During pre-production, the crew developed a timeline extending from 1908 to 1922 of all major events and people of the time period. George Lucas intended to produce episodes leading up to a 24-year-old Jones. However, the series was cancelled in 1993, and as a result there were at least 78 episodes that were not produced at all.

George Lucas has stories to prequel Chapter 1 of the series though he hasn't filmed them.

Basically, to be caught up entirely with Indiana Jones, to current day (2016-2019), you have chapters 1-22 as "Young Indiana Jones" which is this series that I'm reviewing here, then, you'll get to watch how Harrison Ford famously brought us with him in the adventures on the cinemas screens.

Chapter 23: (1935) Indiana Jones and the Temple of Doom (a prequel released in 1984 portraying adventures from Shanghai to India).

Chapter 24: (1936) Indiana Jones and the Raiders of the Lost Ark (released in 1981, Indiana Jones begins this adventure in the midst of a boody-trapped temple in Peru and is non-stop through the Kingdom of Nepal to Cairo and the Aegean Sea).

Chapter 26: (1957) Indiana Jones and the Kingdom of the Crystal Skull (released in 2008 with adventures rocket sledding from Nevada through the Amazon).

and finally, Spielberg/Lucas & Walt Disney releases Chapter 27 (1957/8) with our favorite Indiana Jones (Harrison Ford) due July 19, 2019 in an "Indiana Jones Style" set of adventures "continuing from the Amazonian expedition".

I just find the whole concept of Indiana Jones to be a fun (brainy) thrill ride.

So you have true eras of archeology to explore, starting with "The Young Indiana Jones Chronicles". ENJOY !
39 people found this helpful

Rita ParsonsReviewed in the United States on March 29, 2016
5.0 out of 5 stars
Recommend this series, Great!
Verified purchase
Enjoyed the series. Liked the writing, acting and action. Each story kept you looking forward to the next. Loved the character of both young Indy and Indy in his teens. Sean Patrick Flanery was very good. Would have liked to of seen more than just these 20. I would recommend this to a friend in fact I already have been doing that. Great series, great writing and great acting of Sean Patrick Flanery.
6 people found this helpful

C. I. JamesReviewed in the United States on July 31, 2017
5.0 out of 5 stars
Little boy indie: an intro into world history that I love
Verified purchase
Best of historical fiction! Why didn't they make more these are awesome! These stories take you on a tour of the world, beautiful stories about the most famous people, with stunning photography, and even more beautiful music. I am not a die-hard Harrison Ford fan because the young Indy actors are a lot better at acting. The boy indie is a believable young philosopher. The young man indie seems sincere and more responsible than the Harrison Ford version of Indie. Lucas's portrayal of WWI is detailed with artful photography. When my toddler is a little older, I think I'll use the little boy indie's adventures as an intro into world history.
4 people found this helpful

D. P. WilkensReviewed in the United States on October 6, 2017
4.0 out of 5 stars
Doesn't quite fill Dr. Jone's shoes, but still enjoyable
Verified purchase
A great TV series with Hollywood-level practical effects and an epic scope. Unfortunately the acting and script don't quite live up to the film Indiana Jones. It's hard to see Sean Patrick Flannery as a young Indiana Jones-- in fact he seems too small for the hat. He never grows into the Harrison Ford character even in the later episodes of the series. Still its a great and imaginative series that covers many people and places in history (especially WWI) that American tv seldom covers in an intelligent way. It's also definitely a better entry into the Jones canon than Crystal Skull.

Amazon CustomerReviewed in the United States on March 9, 2016
5.0 out of 5 stars
CORRECT CHAP & AMAZON CHAPT, THEN AMZAON WITH CORRECT CHAPTR NUMBER
Verified purchase
The best way to view this AMAZING series is using the top set of number to keep you in order. An Honestly exceptional Series!!!

atinkof2Reviewed in the United States on March 9, 2016
5.0 out of 5 stars
Wishing there were more Episodes!
Verified purchase
Excellent! I LOVED each and every one! I only wish there had been more seasons!
5 people found this helpful

George A. SimonsReviewed in the United States on April 15, 2016
5.0 out of 5 stars
Definitely worthwhile
Verified purchase
Wow! Very well done. Much better than I expected. I've never heard anything great about this series, but they are great. I'm usually very critical of productions but this has a certain artistic quality. It looks like the budget was huge, the b-roll alone must have cost an arm and a leg. The writing is good. The cinematography is exceptional. It really feels like Indiana Jones in WWI. It does have some out of place nudity in some but not all of the episodes.
3 people found this helpful
See all reviews
Back to top
Get to Know Us
Make Money with Us
Amazon Payment Products
Let Us Help You
EnglishChoose a language for shopping. United StatesChoose a country/region for shopping.
© 1996-2022, Amazon.com, Inc. or its affiliates