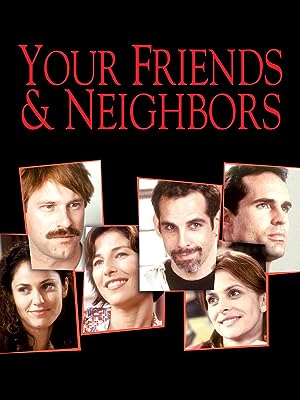 If you are one of those people who like to have all of the movies that you watch have CLEARLY defined "Good" Guys (who are as pure as the driven snow [and, USUALLY just as boring]) — and, for those very same movies to also have just as CLEARLY defined "Bad" Guys (who are OBVIOUSLY "bad" — usually, in a WAY over-the-top, one-dimensional, unrealistic kind of way), then stay VERY far away from this, and ALL other movies by Neil LaBute. Neil LaBute likes to peer behind the curtain, and take a close-up and unvarnished look at the everyday motivations and actions — warts and all — of "normal" people. His characters tend to be VERY "human" (read: flawed [as, are we all — but, hopefully not to the extent that the people in this movie are]) in their motivations and actions — which tends to make some of your more strait-laced viewers VERY uncomfortable (particularly those who want to think of their follow man as being inherently "good" [whatever THAT means]).

While I wouldn't want ANY of the characters in this movie as either a friend or a neighbor, I did THOROUGHLY enjoy watching them interact with each other. HIGHLY RECOMMENDED.

See the other reviews for more detail and/or other opinions regarding the plot of the movie.

Within the confines of the DVD format, this transfer exhibits very-good picture quality. This film features richly saturated colors, good contrast and very-good shadow detail. In addition, relatively fine detail (for a DVD) is evident in the brighter scenes and in many of the close-ups of actor's faces, their hair-styles and their clothing. Also, there are no obvious artifacts such as banding, specks, white dots, hair-lines or color fluctuations to detract from the image. Overall, this movie's presentation on DVD has very good picture quality, and should satisfy all but the pickiest viewers.

This movie's 5.1 soundtrack, while not having any of the sonic pyrotechnics of recent soundtracks, does, however, do everything in an, at least, passable fashion. The dialog is very clear and well-placed (which is VERY important, in a dialog-driven movie), with all voices being easily understood. The musical score is well-recorded, and well-integrated with the on-screen events. The surrounds, while not very active, usually do an adequate job of conveying the on-screen location (nearly all of which are indoors). Unfortunately, there is no deep bass — but, the content of the movie doesn't particularly call for it. This is a "workmanlike" audio presentation, that does not embarrass itself, and serves its visual presentation quite well. Most listeners should find that it has much more than acceptable sound quality.

None of the extras were reviewed.

ilovemydoggiesReviewed in the United States on March 13, 2017
5.0 out of 5 stars
Dark, dry humor, Ben Stiller douchebaggery at its best!
Verified purchase
One of my top 5 favorite ever movies. I love the dry, dark humor. I love the messed up situations, because they are just SO messed up that it's funny to me. Catherine Keener and her sarcasm. Ben Stiller playing the dark foot-in-mouth douche-bag he does so well. Rob Lowe...sexually messed up to the point that it becomes funny. All these things that I find funny, most of MY "friends and neighbors" have found not so great. I've never known anyone to like this movie like I do. If you have a dark, dry sense of humor and don't mind affairs IN THE MOVIES, then give this one a try. I'd still pay full price for a new DVD of it, even though I bought this one on discount.
3 people found this helpful

EriKaReviewed in the United States on March 26, 2001
5.0 out of 5 stars
PEOPLE ARE UGLY
Verified purchase
Director Neil LaBute's follow up to In the Company of Men which is almost as pessimistic, ugly, misanthropic and still intelligent, thought provoking and different from all the other movies out there. Aaron Eckhart makes an amazing and almost unrecognisable transition from sly, conniving, pretty boy Chad in In the Company to the overweight, bumbling, devoted husband with erectile problems in Your Friends and Neighbours. Amy Brenneman portrays his frustrated wife who eventually ends up pursuing an affair with their friend, an actor and acting teacher played by Ben Stiller. Stiller lives with his girlfriend, a writer who is sharp-witted but not the nicest person in the world. She is played stunningly by Catherine Keener. She has problems with people talking at all during sex, so she is angry and turned off by Stiller who wants to talk all the time. This drives Stiller into the arms of Brenneman. When their crucial moment arrives, however, he, like her husband, cannot perform. Keener, meanwhile, has started an affair with another woman, played by Nastassja Kinski (who looks more beautiful now than she ever did in her teens and early twenties). Beyond all of this, Stiller and Eckhart are close friends who have a third close friend, a seemingly psychotic doctor played by Jason Patric. Patric is a lot like Chad from In the Company of Men. He treats women like they are objects, is highly misogynistic, but he seems to hate people overall. His personality is extreme, confrontational and cruel, but you can say for him that he is his own person. He justifies some of his more insane acts by saying, "Common decency dictated the whole thing." The film does not offer much hope for the humanity and may indeed make you sad when you consider that this is quite close to the way reality is. (Some will disagree, but they are probably deluded into thinking the world is basically a good place full of good people).
5 people found this helpful

Amazon CustomerReviewed in the United States on March 15, 2016
2.0 out of 5 stars
Save your money.
Verified purchase
This movie was boring as hell! It's really just an hour and forty minutes of terrible people talking about sex and screwing around, that is really all it is, nothing more nothing less. I couldn't have cared less about anything that was happening on-screen, at all! Don't get me wrong, I don't have a problem with films that consist entirely of dialogue Labute's previous film In The Company Of Men was nothing but conversation and I loved that movie, as despicable as it was it was still an amazing film! But there the conversation was at least interesting and the story despite how disgusting it was, the film was still engaging and eye opening and the dialogue was sharp and brilliant! But this one was just dull! Absolutely dull! I swear it put me to sleep! I would give it one star, but the acting and direction was fantastic, those were the only redeeming qualities of this film but even that couldn't save this train-wreck of a movie. Really, just watch In The Company Of Men instead, don't waste either your time or your money with this monotonous, mindnumbingly boring, BORING film! I swear the ending credits just didn't come soon enough. This movie isn't even memorable, I just watched it only a couple of hours ago and I swear I cannot even remember any of the characters names nor anything that happened. It's just a really terrible movie, about really terrible, insufferable people cheating on each other, and ruining their lives in the process, and honestly what alienated me even more from this film was the fact that these characters are just impossible to get invested in! It just made me care even less. This movie sucks, period, plain and simple. Here you want to know what happens? This should save you your time and money, really here is what happens. Some idiot's talk about sex, and then they go fool around, that is followed by more mindless chatter and then some more sex, more chatter, more sex, wash, rinse, repeat the end. Really that's all there is to it.
4 people found this helpful

W. Parker RubyReviewed in the United States on April 8, 2022
1.0 out of 5 stars
Great movie, but a terrible transfer
Verified purchase
The visual is terrible. The scenes set in darkness are unviewable. Looks like a VHS. This is an amazing "battle of the sexes" movie, and Jason Patric's performance is incredibly disturbing, but Amazon should be ashamed of selling such an inferior product.

Carrie HornungReviewed in the United States on July 18, 2017
5.0 out of 5 stars
This is a great movie.
Verified purchase
One of my favorite movies of all time! Aaron Eckhart is not even recognizable in this film, he disappears so brilliantly iijo. the character he plays. All the top rated actors in the ensemble cast turn in some of the best performances of their careers
One person found this helpful

Maggie W.Reviewed in the United States on July 20, 2015
4.0 out of 5 stars
Noteworthy
Verified purchase
Saw this movie when it first came out. Jason Patric should have been nominated for a supporting actor Oscar, for his monologue about a gang rape. Very disturbing movie but fascinating. The director also did IN THE COMPANY OF MEN, which also deals with misogynistic themes. Two powerful movies
One person found this helpful

BarryReviewed in the United States on February 3, 2020
2.0 out of 5 stars
Engaging but a real downer.
Verified purchase
Well acted by a gifted cast.
However novels and motion pictures seem to run into trouble when ALL the characters are detestable.
One person found this helpful
See all reviews
Back to top
Get to Know Us
Make Money with Us
Amazon Payment Products
Let Us Help You
EnglishChoose a language for shopping. United StatesChoose a country/region for shopping.
© 1996-2022, Amazon.com, Inc. or its affiliates