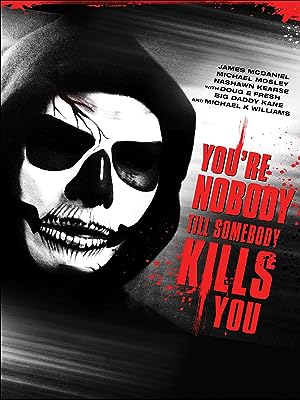 You're Nobody 'til Somebody Kills You

America is AtlantisReviewed in the United States on March 4, 2018
4.0 out of 5 stars
Four Stars
Verified purchase
not a bad indy movie. I didnt see that ending coming at all..lol
One person found this helpful

The Movie GuyReviewed in the United States on October 1, 2012
2.0 out of 5 stars
THE RAP INDUSTRY IS MODERN SLAVERY
There is a slasher killing rappers and amazingly enough the cops are out looking for the guy. Two policemen take on the case. Good cop, Det. Johnson (James McDaniel) a black man who knows very little about rap and the white Det. Francelli ( Michael Mosley) who is curiously a walking rap encyclopedia and also plays the "bad cop."

The slashing is mostly at the beginning of the film. At this point it turns into a lengthy who-dun-it with street interviews for filler material and a Spike Lee message. The production attempts to roll but then sputters on dialouge. The film needed to properly space out the killings and a more thrilling way to connect the dots. Like so many 21st century African-American productions, this film was long on dialouge and short on action. Some acting would have helped.


One person found this helpful
See all reviews
Back to top
Get to Know Us
Make Money with Us
Amazon Payment Products
Let Us Help You
EnglishChoose a language for shopping. United StatesChoose a country/region for shopping.
© 1996-2021, Amazon.com, Inc. or its affiliates