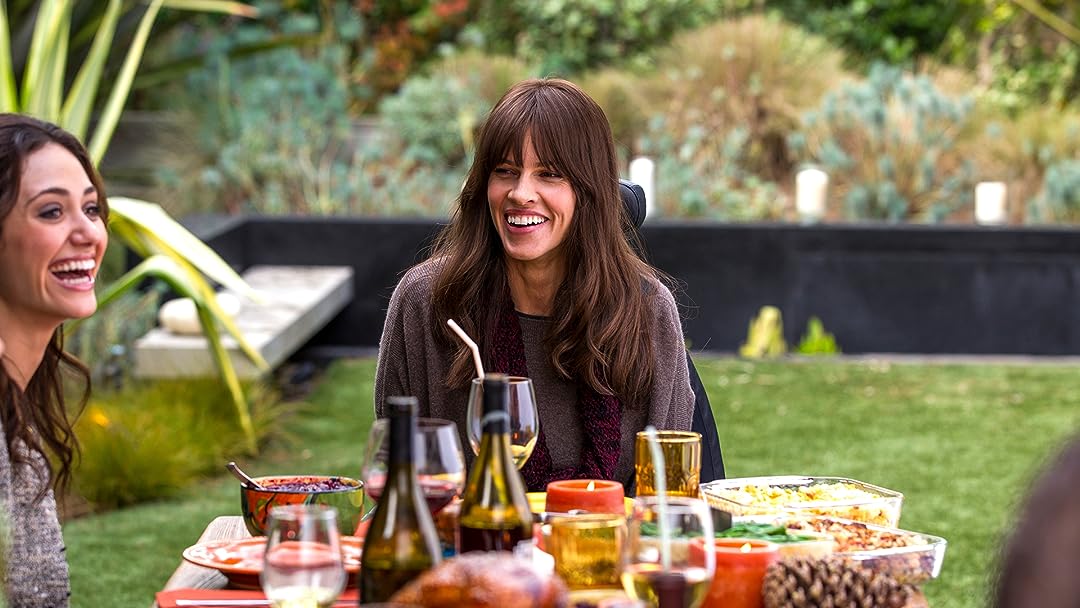 (649)
7.31 h 42 min2015X-RayR
A drama centered on a classical pianist who has been diagnosed with ALS and the brash college student who becomes her caregiver.

Stacy Hayes-GeerReviewed in the United States on April 30, 2018
4.0 out of 5 stars
Must see -- It's inspiring, empathetic, & heart warming :)
Verified purchase
Definitely hits close to home for those living with debilitating illness & their families.... Could be upsetting or helpful depending on the day. Might help those who don't "get it" to understand what it's like. My only criticism is that so many movies that focus on those with debilitating illnesses (Just watched "Me Before You" last night, same issue) come from wealthy families... Adding the financial struggle would be more realistic. It sucks. Oh, & they fail to talk about your intimate relationship with your UPS guy because you buy EVERYTHING on Amazon... Anyway, watch it. It's inspiring, empathetic, & heart warming :)
32 people found this helpful

TulliaReviewed in the United States on September 24, 2018
5.0 out of 5 stars
"Til The End Of Time"
Verified purchase
Two magnificent actors, Hilary Swank and Emmy Rossum, put in outstanding performances in this film.

Kate, an accomplished pianist, contracted ALS, a horrific debilitating disease which left her unable to feed herself, dress herself, attend to her very personal bodily needs, and even put her own makeup on which every woman loves to do. She needed a caretaker, and she hired Bec, the most unlikely candidate. Bec, a sloppy, unorganized young woman with little experience in and knowledge about ALS victims came into Kate's life. For some reason, Kate took a liking to her despite her slovenly appearance. Kate's husband disliked her from the start..

Eventually the two women became friends and soon their relationship bonded into a loving friendship. Bec became very protective of Kate. Kate then learned that her once beloved husband was involved with another woman which totally devastated her.

This is about unconditional love. And how Bec learned so much from the dying Kate and became a better person, and how Kate put her life, in the end, in the hands of her beloved Bec. In one scene, Bec is playing the piano, and Kate's husband puts Kate's hands over Bec's hands as she plays "Til The End of Time," which bespeaks their relationship. It's touching, and poignant.

Watch this film; it's worth your time. But have a box of tissue handy.

Meghan Kaur LouveReviewed in the United States on April 5, 2019
5.0 out of 5 stars
Tearful but charged with emotion
Verified purchase
I love this movie so much. I'm in a similar, but not identical, position as was Hilary Swank's character. I do not suffer from Lou Gering's, but it's a steadily debilitating condition . I won't go into detail, but I will say that there are people who do not wish for extraordinary procedures or measures be taken to preserve their life. I'm one of those people. I just want to exit this life knowing I've done what I could to love people and to call it a successful life. Call it assisted suicide if you wish, but that's not how I think of it. It's a really tough decision for those who follow you and take care of you, but if they truly love you, they will honor your wishes.
11 people found this helpful

ChrisSherrillReviewed in the United States on August 6, 2019
4.0 out of 5 stars
Fantastic
Verified purchase
Four and a half stars.
Hilary Swank and Emmy Rossum are excellent, individually and together, even though Ms Rossum seems to push too hard at times to reveal her character to the watcher. That's why I rated it so highly. The excellent acting of these two ladies make up for the film's short comings.
Such as, you say. The big hearted rich woman who 'saves' the bumbling helper has been played and played and played, even though Ms Swank does a good job with it. The lovable loser and loose poor woman has been played and played. And finally, and I'll upset the apple cart with this, but the inept, insensitive and terribly weak male has been beaten to death. Hollywood has been portraying that image for thirty or forty years now. Can't someone write in a male who doesn't run from death?
I'm a male, and I have held the hands of two grandmothers as they passed away. My dad's mother died when he was eleven, and dad used to tell about his dad who sat up with his dying wife and tried to comfort her all night long before she finally passed in the early morning hours. Hollywood can't seem to find a place for sensitive, caring men. That's a shame.
6 people found this helpful

Melissa M. DuffyReviewed in the United States on December 19, 2021
5.0 out of 5 stars
Brillant acting and story line. A deep look at what is important in life.
Verified purchase
Wow, what a powerful film. The actors in this film deserve and academy award for their performance. This film addresses the need for people to retain their ability to decide for themselves their direction even when a progressive, terminal illness takes away all aspect of physical functioning and leaves you helpless.

The tandem story lines of a young caregiver and a 'successful' woman who develops ALS are parallel. Each has a controllling, dominant mother that attempts to set the course of their daughter's life. Each are dealing in relationship with being loved back and having automony rather than being seen and defined by the men they have been tied to.
Illness and loss don't have to just bring incapacity and decline, they also in this film bring a new awakening to what is most important in life, the ability to decide for oneself our own fate, to determine that we want to have our wishes honored even when another wants to define for us what we should do based on what 'they think is best for us.' In reality, honoring the integrity and automony of each life is modeled in this film.
The character development in this film was also magnificent. Kate's husband grew from being a man who was 'directing' her life and 'taking over' whilst having an affair as Kate grew more incapacitated and both Kate and her caregiver grew in their understanding of what they needed and what they would tolerate.

I loved the nuanced role of Kate's husband and the transformation of his character over time, as well as the nuance and character development of Kate's devoted caretaker and companion/friend.
One person found this helpful

Lisa MillwoodReviewed in the United States on August 14, 2019
4.0 out of 5 stars
Worth Watching
Verified purchase
I am shocked at some of the comments from people who gave this moving a low rating and sooooooo glad that I did not let those reviews keep me from watching this movie. What can I say......Hillary Swank is just such a diverse and talented actress. I never get tired of watching her act. This movie was particularly moving for me, which may have influenced my reaction a bit. My mother had ALS and died four years ago. I have to say that I felt as if Beck was replaying my life the last six months of my mother's life. Right down to the medical decisions whether or not to continue with life support. It was a very realistic display of what people go through with this horrible disease. However, it would have been better had the movie put more emphasis on what the person with ALS actually goes through (more from her perspective). I felt as if they touched upon it but seemed to treat it equally with the issue of the affair. Finally, at the end, the main character clears it up with saying that the breakup of the relationship wasn't about the affair but about her husband actually "seeing her". I remember feeling like him and just wanting to "get everything done". It is an enormous financial, physical, and emotional stressor on the people around the person with the disease. Because this was not really developed during the movie, I gave a four star rating in stead of a five.
4 people found this helpful

TigerlillyReviewed in the United States on May 7, 2018
4.0 out of 5 stars
Good movie about the faces of love and navigating the hand life deals you
Verified purchase
If you've seen the trailer, you have a pretty good idea of the arc of this story. I expected a tear jerker and that's what I got. Hilary Swank is plumbing depths similar to the ones she dove into in her outstanding work in The Boxer. Based on her work here, I'm sure she must have really researched ALS and it shows. Several times I could barely understand her, which I'm sure is true to life, but it sometimes made it difficult for me to follow along. Emmy Rossum is also wonderful and even Josh Duhamel seems to play this with more depth than I've seen from him before. I would definitely recommend this to anyone who feels enriched by watching a story about being true to oneself; the faces of love; and navigating the hand life deals you
8 people found this helpful

Charles & Rosanna Kaelble Reviewed in the United States on February 22, 2021
5.0 out of 5 stars
This is a beautiful movie. you must see this!!!
Verified purchase
this movie hit home for me because I myself suffer from a fatal debilitating disease so I can understand this struggle. they really did an amazing jog portraying a person fighting ALS. people don't understand what these types of conditions do to your lives and what it does to the ones around you. how it pushes the people you thought were your good friends away because they can't stand to see you like that and helping you with anything is just too much of a burden for them so they slowly stop seeing you. people don't understand what it takes from you and how hard you have to fight just to have another miserable day. this movie gives people a good look into that world and lets you see just how hard all of it really is. makes you want to go out and help people struggling with this or some other fatal illness in any way possible.
this movie is an absolute must see. it made me laugh and cry and I loved it
See all reviews
Back to top
Get to Know Us
Make Money with Us
Amazon Payment Products
Let Us Help You
EnglishChoose a language for shopping. United StatesChoose a country/region for shopping.
© 1996-2022, Amazon.com, Inc. or its affiliates