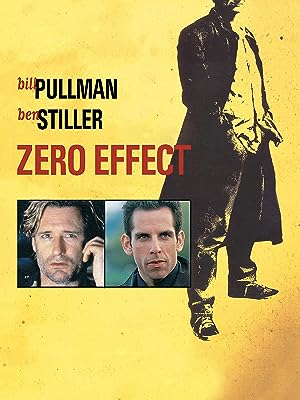 bugmanReviewed in the United States on April 10, 2017
5.0 out of 5 stars
the zero AFFECT
Verified purchase
god i love the zero effect (1997). it was so nice to see ben stiller all young and natty-looking in his trademark tapered pants (yay! tapered pants!) as steve arlo, assistant to the detective. kim dickens, who i love more and more (mom from fear the walking dead) is awesome, intense and competent as gloria sullivan. and the zero effect is bill pullman's signature role, i think; the man who has played a bada$$ president, a tenacious ethno-botanist, and "the stupidest person on the face of the earth", literally owns the role of daryl zero, oddball detective genius. the mystery is sound, and the resolution really elegant. the romance between daryl zero and gloria sullivan is one of my favorites in cinema. it really resonates with me. great job, jake kasden!
8 people found this helpful

This a great overlooked movie. And Ben Stiller, although wonderful in his role, isn't even close to being the star here. That honor goes to Bill Pullman, followed closely by Kim Dickens, and then Ryan O'neill. All the parts are very well acted, and Stiller is no exception, but other than name recognition, I can't imagine why Amazon would choose to put his name down as the star, when he obviously isn't.

The movie itself is a very clever update of the classic Sherlock Holmes/Dr. Watson private investigating team, complete with Holmes (Pullman) making ALL the relevant decisions which more often than not go completely over the head of Watson (Stiller). The result is brilliant. Add to the mix the fact that Kim Dickens turns out to be THE Woman, which Doyle fans will recognize without any trouble, you get a very enjoyable and intelligent reworking of Sherlock Holmes set realistically and believably in modern times. Oh, and even people who are unfamiliar with Sherlock Holmes will enjoy it -- it's that good. But NOBODY will come away with the idea that Ben Stiller was the star. It's just not true. I'm sure Stiller himself would agree. Ask him.

Judith JohnsonReviewed in the United States on August 21, 2011
5.0 out of 5 stars
Excellent, excellent Sherlock Holmes update
Verified purchase
Before 2010 BBC's brilliant redo of Holmes and Doc Watson ([[ASIN:B004132HZS Sherlock: Season One]]), back in 1997 there was The Zero Effect, an amazing Holmes revisionist piece starring the wonderful Bill Pullman ([[ASIN:0780630068 The Virginian [VHS]]]) as the sociopathic Darrell Zero and wonderful Ben Stiller ([[ASIN:B001R10BF0 There's Something About Mary [Blu-ray]]]) as his Watson type assistant. No Moriarty here but Ryan O'Neal is really great as a particularly slimey villain.

I think this ingenious and delightful movie was well- reviewed but generally overlooked when it was released. What a shrame as it was written, directed and produced by Jake Kasdan ([[ASIN:B0012IWO08 Walk Hard: The Dewey Cox Story [UMD for PSP]]]).

The plotline borrows from Coyle's 'A Scandal in Bohemia' and so the socially inept Zero sets out to solve a mystery and develops a fascinating love interest along the way. Holmes' drug usage, powers of observation and much more are all here. I have taken this movie over to lots of folk's houses to share and they have just loved it! Do yourself a favor and see it immediately.
6 people found this helpful

onetwothreeReviewed in the United States on June 14, 2016
5.0 out of 5 stars
Amazing movie!
Verified purchase
This movie is bible-like in that you get powerful emotional pulls of all kinds, + quotables! I believe this is Bill Pullman's C. Kane. Stiller, as always: Awesome. Kim Dickens is unbelievably beautiful and magical here. After all, this is a film about the discovery of her motivations, the destruction from whence she came, and how brilliantly she has not allowed it to destroy her. Who else could understand and unravel her Genesis but another Phoenix? One of my Top 10. This movie is both dramatic and incredibly funny, hence its genius--Enjoy!
3 people found this helpful

Delilah M.Reviewed in the United States on June 5, 2021
5.0 out of 5 stars
A hidden gem
Verified purchase
Bill Pullman proving yet again he is one of the greatest actors of our time..... I wasn't sure if I was going to like this movie but it turns out I really enjoyed it.... It's worth the watch.

Linda HayesReviewed in the United States on July 31, 2022
1.0 out of 5 stars
Zero Effect
Verified purchase
Sorry I love Ben Stiller and Christian Bale but very slow story, waste of time

J. MatthewsReviewed in the United States on January 27, 2012
4.0 out of 5 stars
A Brilliant Awkwardness
Verified purchase
The detective sleuthing story was remarkably entertaining for a first time project for the young Jake Kasdan. Daryl Zero (Bill Pullman) is a remarkable detective, the best in the world, who has achieved his success through his ability to remain a dispassionate and thorough observer. The case of the missing keys starts off innocently enough, but the amount of money being paid to locate them represent a much darker crime. Zero is quite capable at blending in and remaining invisible. The difficulty comes from when he actually has to interact with the world. For this he has come to rely on his assistant, Arlo, enjoyably played by Ben Stiller, who quite frankly has had enough with the bizarre mannerisms and seemingly unreasonable and unnecessary demands placed upon him to support Zero's investigations. In this case, the blackmailer's identity and the missing keys themselves are identified by Zero remarkably quickly, leaving Daryl to work out the primary difficulties of the wherefores and whys. Zero will not conclude the case until he can determine the actual relationship between the various parties. As he moves to investigate the attractive young blackmailer he begins to play a dangerous game that may undermine the dispassionate qualities that had served and protected him thus far. I enjoyed the story and the pace, the capable contributions of Pullman and the young Kim Dickens, and the capable writing and directing of twenty-two year old Jake Kasden.
2 people found this helpful
See all reviews
Back to top
Get to Know Us
Make Money with Us
Amazon Payment Products
Let Us Help You
EnglishChoose a language for shopping. United StatesChoose a country/region for shopping.
© 1996-2022, Amazon.com, Inc. or its affiliates