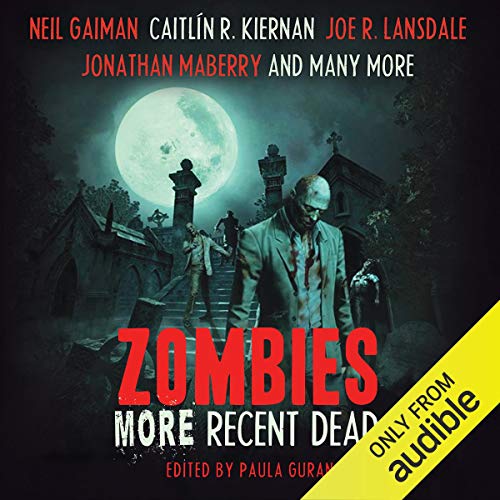 The living dead are more alive than ever! Zombies have become more than an iconic monster for the 21st century: They are now a phenomenon constantly revealing as much about ourselves - and our fascination with death, resurrection, and survival - as our love for the supernatural or post-apocalyptic speculation. Our most imaginative literary minds have been devoured by these incredible creatures and produced exciting, insightful, and unflinching new works of zombie fiction. We've again dug up the best stories published in the last few years and compiled them into an anthology to feed your insatiable hunger….

Your audiobook is waiting!
Learn more about Membership
List Price: $34.94
You Save: $4.37 (13%)
By completing your purchase, you agree to Audible’s Conditions Of Use
Sold and delivered by Audible, an Amazon company

josh lewis
2.0 out of 5 stars Mostly dreck, with a bit of schlock thrown in for good measure...
Reviewed in the United States on April 7, 2017
Verified Purchase
Most of the stories are downright awful, several of them are 1,2, or 3 pages long (not exaggerating) , which strikes me as just criminally lazy/greedy. Virtually nothing original aside from 2 stories, not even close to the best efforts of the "big name" authors whom you may be familiar with...I don't know what else to day- massively disappointing. Many of the stories try out cutesy little "twists" on the genre, all of which fail utterly and all of which have been done before, and done better. I absolutely adore the genre, such as it is, and this collection is basically an affront to said genre. Not scary, even a tad unsettling at any point, in any story. Yet not funny or witty either. Not profound enough by far either to pull off what it seems to be attempting. Just plain lame, by and large. Save your money
Read more
2 people found this helpful
Helpful
Report abuse

paul
5.0 out of 5 stars DO NOT MISS THIS...or the one that preceded this!
Reviewed in the United States on September 7, 2017
Verified Purchase
love me some Z fiction...and this is a great followup to what might be the best collection ever...each story a gem, each unique, one doesn't feel like the same tone/style as the last one...and all top writers!
Read more
Helpful
Report abuse

Yzabel
4.0 out of 5 stars Fairly interesting
Reviewed in the United States on January 31, 2015
(Note: I got a copy through NetGalley, in exchange for an honest review.)

Anthologies are always difficult for me to rate—so many different stories, so many authors, and you know you’re bound to find very good pieces, and some you don’t like at all. As far as collections go, this one about zombies was a fairly good one, all in all, that I would rate a 3.5 to 4 stars.

(Also, the time I spend reading a book is usually a good indicator of my interest in it, but in this case, it doesn’t apply. I was reading a couple of other zombie-themed books in the meantime, and I preferred to go slow, rather than eat too much of the same thing at once. pun totally intended, of course.)

My favourites:
- “Iphigenia in Aulis”: the story that spun “The Girl With All The Gifts”, so no surprise here. Reading this “first draft” was interesting, even though I liked the novel better (since it was more developed).
- “The Naturalist”: nasty and vicious undertones here.
- “What Maisie Knew”: a dark and twisted take on what use zombies can be. Somehow it also made me think of “Lolita”, probably because of the way the narrator views himself?
- “The Day the Music Died”: a manager trying to cover up that his money-making rock-star is actually dead. This one had a twisted, funny side that spoke to me. Don’t ask me why.
- “The Death and Life of Bob”: how zombies are not necessarily what you expect… and how dark and narrow-minded humans can be, too.
- “Jack and Jill”: parallels between the zombies and a child who’s sick with cancer and already a “living dead”, in that he knows he probably won’t stay in remission for long. (The fact that *I* actually enjoyed a story with cancer in it is mind-boggling, and speaks of how it managed to make me forget my own fears in that regard.)
- “The Gravedigger of Konstan Spring”: a remote little town where people don’t seem to stay dead for long. Disturbing, strange, quirky, and full of moments when I wondered to which extent the inhabitants would go to keep their gravedigger.
- “Chew”: disturbing not for its take on zombies, but for what actual human beings can do to other human beings.
- “What We Once Feared”: another story bent on revealing how bleak human nature can be, and how dire situations can reveal the worst in people.
- “Aftermath”: the title says it all. How people manage and how life gets back on track slowly after the cure to the zombie-virus has been found. Disturbing aspects about what killing those “zombies” actually meant.
- “Love, Resurrected”: a dark fantasy tale of sorcery, necromancy, and of a woman who has to keep battling even after the flesh has left her bones.
- “Present”: sad and touching in a terrible way.
- “Bit Rot”: when a zombie story collides with science-fiction of the space-travelling kind. The reason behind the “bit rot” was a nice change for me.

OK stories:
- “The Afflicted”: I liked the idea behind it (the elderly ones only falling ill… alas, everybody’s doom to grow old), but it deflated a bit after a while.
- “Becca at the End of the World”: the last hour of a teenager. However, it was a little too short to be as powerful as it could be IMHO.
- “Delice”: not one I’ll remember for long, but nice to read
- “Trail of Dead”: good concept, but I’m not too sure of the apprentice’s part in that (it seemed unfocused).
- “Stemming the Tide”: a little weird, though also poetic in its own way.
- “Those Beneath the Bog”: the curse on a lake, and how old folk tales shouldn’t be discarded. Perhaps a wee bit too long, though.
- “What Still Abides”: very, very weird, in that it tries to emulate Old English grammar. I can’t make up my mind about it, but overall, it still felt strange in a sort of good way for me.
- “In The Dreamtime of Lady Resurrection”: beautiful and dreamy. Not exactly a zombie story, though.
- “‘Til Death Do Us Part”: not exactly original, still enjoyable. A wife comes back from the grave, and her family tries to keep her with them.
- “The Harrowers”: the narrator’s name kind of tiped me about the ending, however it remained interesting.
- “Resurgam”: a good idea that unfortunately ended up in two storylines not meshing up together well. I still liked the Victorian narrative, though.
- “A Shepherd of the Valley”: a bit predictable.
- “The Hunt: Before and The Aftermath”: I wasn’t sure at first where this one was going, but it had interesting insights into revenge in general.

The ones I didn’t like:
- “Dead Song”: I didn’t care for the actor-narrating-story approach. Another one might have worked better, because there was a good idea behind it.
- “Pollution”: I like Japanese culture, but the tropes were too heavy-handed here.
- “Kitty’s Zombie New Year”: forgettable, I didn’t really see the point to this story.
- “Selected Sources for the Babylonian Plague of the Dead”: the narrative style didn’t do it for me at all here. Which is really too bad, because the different setting made for quite interesting grounds.
- “Rocket Man”: I don’t know if it was meant to be comical or not. It didn’t leave much of an impression (but then, I’m not too interested in base-ball for starters, which doesn’t help).
- “I Waltzed with a Zombie”: I couldn’t push myself to get interested in it, I don’t know why. I neither adore nor terribly dislike Hollywood B-movie settings in general, so maybe it was the narrative that didn’t grab me.

Note: A couple of stories are actually in poetic form, which makes them harder to rate (yes, including Neil Gaiman’s one).
Read more
3 people found this helpful
Helpful
Report abuse

Shay VanZwoll
5.0 out of 5 stars An epic book of Zombies!
Reviewed in the United States on September 15, 2014
Zombies have been increasingly popular the past few years, but stories and myths of zombies (or zombis) have been around for even longer. From Romeroesque zombies to radioactive robots, with everything in between, this is a great collection of everything zombie.

And by everything, I mean EVERYTHING. Thirty six short stories are available within this collection. There are poems about zombies, stories about voodoo zombis, extra-short short stories, and longer short stories. Charles Stross brings with him a story from the same universe as Saturn's Children and Neptune's Blood, as Freya's descendents are victims of a gamma burst that drives the other workers on a colony ship to prey on and eat their fellow travelers for undamaged feedstock. Neil Gaiman is also present with his wit in showing that zombies may not be the worse thing that can happen... all on one horrible day. The other authors are equally talented with their shared nightmares of flesh-eating horrors.

If you're a fan of zombies of any type, I recommend that you read this book. There is something in here for everyone, and you might find yourself intrigued by an idea you hadn't dreamt of yet.

NOTE: I read this book courtesy of Netgalley in exchange for an honest review.
Read more
5 people found this helpful
Helpful
Report abuse
See all reviews