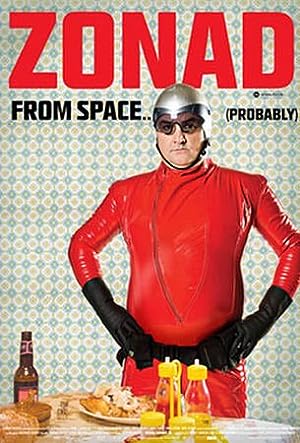 (11)
5.31 h 15 min201113+
When the Cassidy family finds a red leather clad man passed out on their living room floor, they assume he's an alien. Zonad is more than happy to oblige.

DVD VerdictReviewed in the United States on July 28, 2011
4.0 out of 5 stars
One of the raunchiest, most nonsensical, and downright silliest comedies I've seen in a long time.
Judge Mac McEntire, DVD Verdict-- Zonad is pure silliness from beginning to end. This is "anything for a laugh" comedy. Everything is exaggerated into cartoonishness, the cast goes to great lengths to humiliate themselves, and no one is afraid of lowbrow gross-outs for the sake of a lowbrow gross-outs. Things like plot and character get chucked aside so that everything can be goofy. It shouldn't work, and the whole thing should be annoying, but somehow all the pieces come together with hilarious results.

A big key to Zonad's comedic success is its cast. These folks know just what kind of movie this is, and they embrace it. Delaney, as the title alien, adopts a slightly otherworldly manner when speaking, while the whole time his eyes and facial expressions are reacting far more humanly, as he stays one step ahead of the clueless villagers while also worrying about eventually being found out. It helps that the villagers are indeed clueless, acting just like characters from stereotypical 1950s sitcoms, where husbands and wives call each other "dear," and teenagers exclaim, "gee whiz." It's all exaggerated for yuks, of course, and this means that the audience is in on Zonad's joke, and we're playing it right along with him. That way, we're invested in what happens, despite the whole "unlikable protagonist" conundrum.

Make no mistake, these characters are unlikable. Zonad is scamming not just a family but an entire town out of all its food and beer, and its daughters as well. His behavior comes back to haunt him once Bonad shows up, so there is some comeuppance. Zonad's struggle against Bonad, though, is less about having an epiphany and changing his ways, but about longing to return to gouging the hapless villagers out of their alcohol. Therefore, Zonad coming to his senses and changing his ways ends up being just as silly and nonsensical as everything else in the movie.

Also know that this is not a movie for the kiddies. Antics such as public drunkenness, people urinating on each other, and grown men lusting after underage girls are all played for laughs, and this will turn off many viewers, no matter how ridiculous it is portrayed. There's an odd subplot featuring the local cop, who is so loyal to Zonad after Zonad buys him a pint that he brutalizes anyone who speaks against Zonad. He has some funny bits, but mostly the guy is so vile that he seems out of place in the otherwise squeaky-clean village.

Special mention must be made of the score, by Brian Byrne. At turns, it evokes classic John Williams with big outer-space fanfare, and then the overly-sanitized small town aesthetic. The music punctuates the comedy excellently, sometimes solely serving as a punch line. The score actually makes the comedy funnier.

Zonad crash-lands onto DVD with an anamorphic transfer that's bright and clean, making the small Irish village look vivid and colorful. The 2.0 sound doesn't do Byrne's score any favors, but is decent. Extras are a laid-back director's commentary and the theatrical trailer.
-Full review at dvdverdict.com

G. TeslovichReviewed in the United States on September 14, 2011
1.0 out of 5 stars
Dumb
So dumb it's not even worth listing all the reasons. Forget parody because that requires intelligent writing, acting and production quality to qualify for that rationale. Oddly the final credit indicates it was sponsored by "The Government of Ireland". That makes you wonder since Ireland has produced nothing but debt so by pandering this film to the naiveté is that going to rescue them.
See all reviews
Back to top
Get to Know Us
Make Money with Us
Amazon Payment Products
Let Us Help You
EnglishChoose a language for shopping. United StatesChoose a country/region for shopping.
© 1996-2021, Amazon.com, Inc. or its affiliates