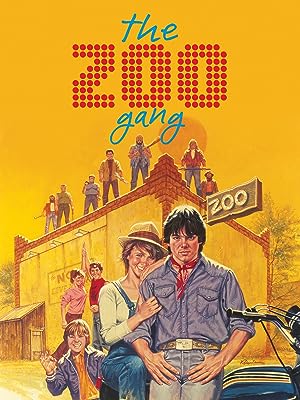 (3)
4.91 h 36 min1985PG-13
A group of friends lease a dilapidated nightclub, the Zoo, from Leatherface, an old drunk. The brawny, but dimwitted Donnelly brothers come around looking for a fight.

LaurenReviewed in the United States on September 27, 2014
5.0 out of 5 stars
Five Stars
Verified purchase
This was ok only ordered for Jason Gedrick

B&S About MoviesReviewed in the United States on May 14, 2020
2.0 out of 5 stars
No one remembers this
Pen Dasham wrote and produced Robin Hood: Prince of Thieves and the 1980’s revivals of The Outer Limits and The Twilight Zone. He often worked with John Watson, making this film and Backdraft. They wrote, directed and produced this late 80’s teen film.

Before you know it — and after getting past the adults in town — The Zoo becomes an overnight success.

That’s when the Donnelly Clan decides they want to take it over. They’re led by Little Joe, who is played by a demented looking Jackie Earl Haley nine years after The Bad News Bears and 25 years before he’d play Freddy Krueger.

His twin brothers are played by Glen and Gary Mauro, who were the twin vampires in Once Bitten.

How did this end up in wrestling week? Well, it turns out that Leatherface used to be a wrestler named The Winch and he teaches the kids how to defend themselves.

Some claim that this was the first movie to actually be awarded a PG-13 rating, despite Red Dawn being released first.

M. JensenReviewed in the United States on February 16, 2010
4.0 out of 5 stars
Great Flick!
I agree with Jason Jones. This movie IS a nod to a better time. The actors/actresses in this film did an outstanding job. My son is 10 and I'd like for him to see this film! I collect movies, I've been building my library and cannot wait for this to come out on DVD. Check it out.
4 people found this helpful
See all reviews
Back to top
Get to Know Us
Make Money with Us
Amazon Payment Products
Let Us Help You
EnglishChoose a language for shopping. United StatesChoose a country/region for shopping.
© 1996-2022, Amazon.com, Inc. or its affiliates