You've subscribed to The Zoo Memoirs! We will preorder your items within 24 hours of when they become available. When new books are released, we'll charge your default payment method for the lowest price available during the pre-order period.
Update your device or payment method, cancel individual pre-orders or your subscription at
Your Memberships & Subscriptions
There was an error. We were unable to process your subscription due to an error. Please refresh and try again. 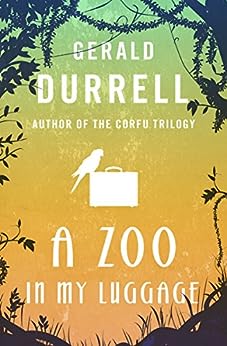 From the Illustrated Biography

Praise for Gerald Durrell
“Animals come close to being Durrell’s best friends. . . . He writes about them with style, verve, and humor.” —Time on The Whispering Land

Gerald Durrell (1925–1995) was a British naturalist, zookeeper, conservationist, author, and television presenter. He is the author of the memoirs My Family and Other Animals; Birds, Beasts and Relatives; A Zoo in My Luggage; The Whispering Lands; and The Garden of the Gods; and more than twenty-five nature books. A student of zoology, he founded the Durrell Wildlife Conservation Trust on the Channel Island of Jersey.

4.7 out of 5 stars
4.7 out of 5
270 global ratings
How are ratings calculated?
To calculate the overall star rating and percentage breakdown by star, we don’t use a simple average. Instead, our system considers things like how recent a review is and if the reviewer bought the item on Amazon. It also analyzes reviews to verify trustworthiness.

BoBo Chen
5.0 out of 5 stars Captivating!
Reviewed in the United States on September 7, 2020
Verified Purchase
What a delightful page turner! I loved this book so much I finished it within hours of the 200 pages book. Witty, skillful, and hilarious, are just 3 words out of many more that can describe this superbly written book. I Ordered this book after watching The Durrells in Corfu series and fell in love with the family stories. However, I was not expecting Gerrard Durrell’s commitments to animals to be such captivating tales told by him. I caught my self smiling, laughing, and Googling some of the unfamiliar animals he had in the stories. I was involved!

His descriptions of landscapes, happenings, people, and emotions are so catchy that they put the reader in the instance and seeing the unfolding of the stories live from his eyes. The simplicity of life and less materialistic world, compared to the present, is such a breath of joy and envy, of how life way in the old days of 1950s. The relationship between people, the trust, the straight forwardness, were things of desire in today’s world. His relationship with the Fon of Baftu were filled with fun and endless drinking parties but the two men were connected in their hearts with warm friendship. It was exceptionally heartwarming and brought tears to my eyes when the night before Durrell was to leave Bafut, the interaction between them were so emotional and mutually respectful that they are examples of what friendship should be like.

The setting of the real stories were in the early 50s so naturally the relationship and handling of the animals were not as today’s standard but Durrell’s love for animals and his strong will to raise awareness for conservation of them, especially endangered ones, are more advanced than what many people does today.

All in all, exceptional tales of love of animals, distant land, people, and life. Looking forward to reading his other books.
Read more
One person found this helpful
Helpful
Report abuse

nudedudeinknox
4.0 out of 5 stars Disappointing Delivery.
Reviewed in the United States on April 17, 2021
Verified Purchase
Although the book and author are wonderful, my copy arrived nearly a week late and damaged. This is highly unusual for Amazon! Actually, I believe the delay and damaged was the fault of the carrier, USPS, and not Amazon. The paperback novel arrived bent, with large creases and the appearance and feel of water damage. Again, I reiterate, the novel is fantastic, written by one of my favorite authors, based on a true life family experiences of the famous Durrells!! The book is damaged, but my enthusiasm for reading this novel are not dampened!!
Read more

4.0 out of 5 stars Disappointing Delivery.
By nudedudeinknox on April 17, 2021
Although the book and author are wonderful, my copy arrived nearly a week late and damaged. This is highly unusual for Amazon! Actually, I believe the delay and damaged was the fault of the carrier, USPS, and not Amazon. The paperback novel arrived bent, with large creases and the appearance and feel of water damage. Again, I reiterate, the novel is fantastic, written by one of my favorite authors, based on a true life family experiences of the famous Durrells!! The book is damaged, but my enthusiasm for reading this novel are not dampened!!
Images in this review

Money
5.0 out of 5 stars Vivid word pictures
Reviewed in the United States on May 16, 2017
Verified Purchase
I got hooked on this author watching the PBS series about his family and their time on the island of Corfu. Durrell's books are laugh out loud funny and educational at the same time. Must reads for anyone with a love of animals. This book deals with the trials and tribulations of collecting a zoo and then finding a place to put it. I fell in love with the Fons - the village leader where the Durrells stayed when collecting and hope there is more of his story in books I haven't yet read. A real winner!
Read more
6 people found this helpful
Helpful
Report abuse

Snow leopard
5.0 out of 5 stars A zoo in my luggage
Reviewed in the United States on September 21, 2012
Verified Purchase
When this, and the others in the series, first came out I devoured them eager for the mysteries of Africa and its birds and animals and remarkable characters. Having now traveled to many of the countries so well described, I have recognised some of the animals and birds Durrell describes and memories of the Bafut of Fon come flooding back. Read and enjoy, then visit if you can.
Read more
11 people found this helpful
Helpful
Report abuse

Amazon Customer
5.0 out of 5 stars Book
Reviewed in the United States on May 25, 2019
Verified Purchase
Based on TV program we watch
Read more
Helpful
Report abuse
See all reviews

JCT Richards
5.0 out of 5 stars Great and intersting zoological story.
Reviewed in the United Kingdom on March 3, 2013
Verified Purchase
Gerald Durrell was not only a terrific writer, he was also a fascinating and interesting person. This story of his adventures in Africa and his cooperation and friendship with the African chief makes the book a pleasure and delight to read. I have read his story of his boyhood in Corfu and now I will purchase his other books over the next year or so and know that I will enjoy thoroughly relaxed and enjoyable reading. I have also visited his excellent zoo in Jersey where all the animals are kept in roomy well equipped and clean accomodation.
Read more
One person found this helpful
Report abuse

Mr. P. F. Green
5.0 out of 5 stars Excellent story telling
Reviewed in the United Kingdom on January 19, 2018
Verified Purchase
Excellent story telling .... having served at sea, with no TV, books were one of the mainstays of leisure. Well Recommended !
Read more
3 people found this helpful
Report abuse

D. Norman
5.0 out of 5 stars AWESOME BOOK!
Reviewed in the United Kingdom on April 25, 2013
Verified Purchase
This is by Gerald Durrell the naturalist who wrote My Family and Other Animals. It tells the story of how he wanted to open his own zoo. I bought this for my 9 year old son as he likes animals and he thought it was a fantastic book. Great characters, good story line and he has really enjoyed it. He has read all the usual Harry Potter, Ronald Dahl, Wimpy Kid etc and this was something different. Would definately recommend it for any boys who like to read.
Read more
One person found this helpful
Report abuse

Gina G
5.0 out of 5 stars Early arrival.
Reviewed in the United Kingdom on October 30, 2016
Verified Purchase
Arrived 2 days earlier than estimated delivery date. I ordered it for my 12 yr old daughter as she wants to be a zoologist and loves reading. She was very excited to receive it and can't wait to start reading it. She loved the tv series 'The Durrells' so next up with be that trilogy for her to read.
Read more
Report abuse

Mrs C M Barrett
5.0 out of 5 stars A Zoo in My Luggage
Reviewed in the United Kingdom on October 14, 2013
Verified Purchase
I have visited the Durrell Zoo in Jersey and the book described the build up to finding this site on which to set up the zoo. I also read My Family and Other Animals, many years ago. Gerald Durrells description in both books were so descriptive that you could visualize the scene. A Zoo in My Luggage made for an interesting and very amusing read.
Read more
Report abuse
See all reviews