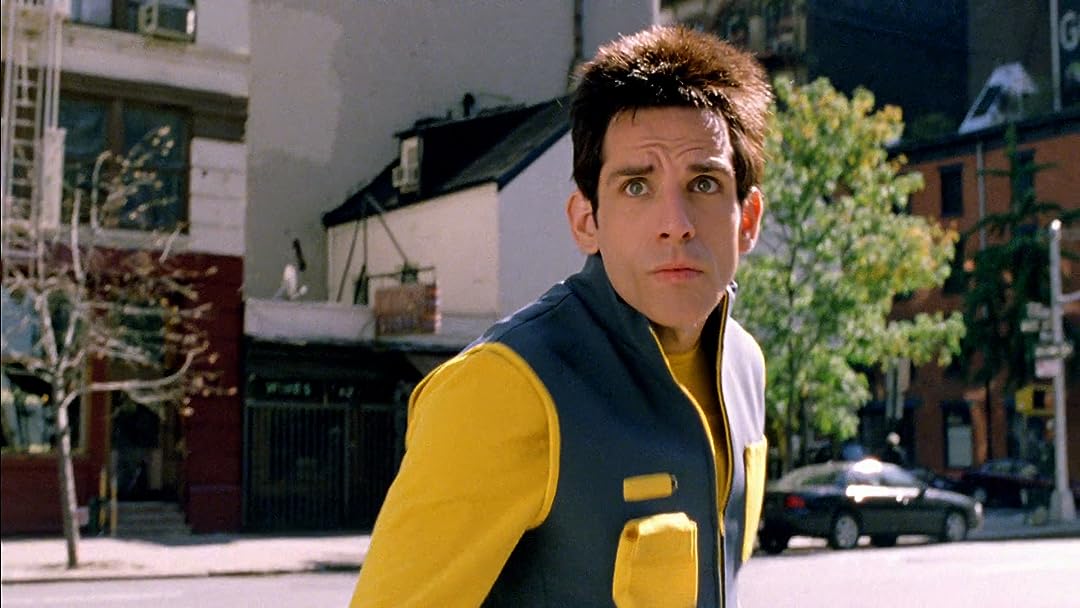 Talara MastersReviewed in the United States on January 4, 2021
1.0 out of 5 stars
I HAVE NO IDEA HOW THIS GOT SUCH HIGH RATINGS
Verified purchase
all the advertisements shown for this movie has him in many different out fits which look very attractive but do not show up in the movie. Was absolutely insulting to the senses I kept waiting for it to improve which it never did. It's insane over 3,000 ppl gave it a 4.5 rating. It's quite terrible. I literally wasted my time, my loved one's time & most of all I could have used it on better spending. I would not let any kids watch & highly recommend adults follow suit. If there was a way to get my money returned I would certainly be doing it, but *sighs* there isn't . So maybe I can help someone else to save their money before throwing their money away on this terrible movie
6 people found this helpful

joel wingReviewed in the United States on March 23, 2021
4.0 out of 5 stars
Spoof of the fashion industry is a lot of fun
Verified purchase
The fashion industry wants the prime minister of Malaysia assassinated because he’s going to raise the minimum wage in his country and increase the costs for businesses. Will Farrell a fashion designer recruits the stupidest fashion model he knows Ben Stiller for the job in this great satire. Obviously the point of the movie is to spoof the fashion business by making it out to be vapid, empty and self-serving. The movie is full of funny moments like when Zoolander goes back to his hometown to be a coal miner with his family. There are also some notable cameos such as by David Bowie. The result is a lot of fun.
2 people found this helpful

BertilakReviewed in the United States on March 29, 2016
4.0 out of 5 stars
What a hoot
Verified purchase
What a hoot. Male fashion model (Derek Zoolander) as a trained and brainwashed assassin. Pure idiocy, but lovable idiocy.

Homages to famous films, for example Michael's "You broke my heart Fredo" speech in The Godfather, and an ape scene from 2001 Space Odyssey. You sure can believe Owen Wilson as an ape!

There is a Zoolander 2 out now. I'll wait for availability via streaming.

Trivia found in the Internet: There is a Dutch model Mark Vanderloo and an American model Johnny Zander.

QUESTION: Can anyone explain the "Magnum Look?" I was waiting for a good Magnum P.I. or Tom Sellick impression but I don't think I got it.

Grant WatsonReviewed in the United States on March 4, 2020
5.0 out of 5 stars
Not just a movie, a guide to life.
Verified purchase
The sublime truths of this movie are too profound to number. As a man often self-thought of as ridiculously good looking, I find the lessons taught in this step by step life guide to be as important as ambi-turning and hair gel. And always, always question the motives of your agent or you, too, might wind up in an international plot to kill the Malaysian Prime Minister.
2 people found this helpful

TrancelucenceReviewed in the United States on August 25, 2014
5.0 out of 5 stars
Priceless, delightfully goofy SKEWERING of the Fashion Industry
Verified purchase
The first time I saw this, it didn't compute- I thought it was one of the most asinine things I'd ever seen. Later I saw it again, and it began to work its magic on me. I've since seen it many times, and its fatuousness (i.e., DUMB but grandiose, self-important) slyly mirrors its subject matter, the fashion industry and cults of celebrity in general. I've told several people what a great movie I think Zoolander is and most think I'm nuts, but it's now a staple of my video collection, along with other great sendups/ mockumentaries, such as Christopher Guest's films, along with [[ASIN:B007QA3AH2 Galaxy Quest]] and [[ASIN:B004ZISVRW Trollhunter]].

It's patently absurd, often hilarious. Could there BE an industry more deserving of being so mercilessly lampooned? IMO, people who take the fashion industry as something to live and die by, something sacrosanct, should have THEIR eyes stitched open, a la [[ASIN:B002M87WLI A Clockwork Orange]] and be forced to watch Zoolander over and over until they're deprogrammed.

I'm an avid Project Runway fan, which celebrates individuality, innovation. Fashion is supposed to be about SELF-EXPRESSION. Heidi Klum rarely looks like anyone else- unlike other models has meat on her bones, curves, and changes her look/style from day to day (often wearing a ponytail and no makeup at all). What I decry are the masses who march like mindless drones or lemmings to the sea (well, not march, exactly, more like shuffle, in stiletto heels), in skinny jeans (or with Kewpie doll hairdos, in the case of males), looking neither left nor right, raccoon-like "smoky" eyes glued to phones or tablets, lest they miss the latest pearl of wisdom to issue from sage lips of the likes of Kim Kardashian or Justin Bieber. A few still sport those short, imbecilic Bozo the Clown inspired dos with the little flips on either side of the face, worn a few years back by women old and young, tall and short, fat and thin alike, whether flattering or not, mostly NOT (why not just wear a T-shirt proclaiming "I'm a NITWIT- do with me what you will"?), or, the now obligatory long, wavy, yak-hair extended and mousse-laden tresses effected by 94.53% of the women in this country (home of the free, land of the brave), who look to be fresh off the assembly line at Mattel. These are people who can VOTE and operate heavy machinery. Mind-boggling.

But seriously, you see very little of this on TV and in films from other countries (except possibly Mexico, and to some extent, Japan)- in European productions people look like individuals, all different, with their OWN style. Zoolander parodies the mindless sheeple who idolize fashion and its icons, based on little more than surface appearance and hype, and renders equally ridiculous the icons themselves- fatuous self-promoters who often come to believe their own schtick, seeing themselves as profoundly important in the cosmic scheme of things and managing to persuade legions of undiscriminating fans, inexplicably, that they're special and worthy of adulation, despite ALL evidence to the contrary, and that they're deserving of obscene amounts of devotees' hard-earned cash. Will Farrell as idiot fashion designer Mugatu, portrays such an icon to comedic perfection.

Ben Stiller, Owen Wilson and Ferrell, as fashion superstars, and Christine Taylor, as the canny investigative reporter who pulls back the curtain to reveal the wizard, are all inspired and marvelous, patently absurd. And I love the many cameos by celebrities, e.g., David Bowie (yeah!), an individualist if ever there was one, and a stammering, off-kilter Natalie Portman, completely star-struck by the great Derrick Zoolander. The movie is studded with priceless lines, such as Owen Wilson's as supermodel Hansel- [I paraphrase]: "Sting is such a hero of mine, all the music he's made over the years... I don't actually LISTEN to it, but I respect him for doing it..." and: "I wasn't like other kids, who wanted to be astronauts or the president... I was more interested in what bark is made of."

Yeah, there are a few dumb scenes, (SPOILER ALERT), such as the orgy scene, or the model walk-off challenge with the ultimate test being the removal of undies without taking off one's trousers. But there are many more great ones, such as the one wherein Derrick and Hansel disguise themselves as janitors, or those in which a lost, dispirited Derrick leaves modeling to try his hand at coal mining, to Dad Jon Voight's utter horror (Voight is GREAT, as always, and in this case, hilarious). The film, from start to finish, is SO silly, delightfully GOOFY. Zoolander's heart is in the right place, it's so thoroughly good-natured in its lambasting of the fashion world, resonant with good will and affection between its players and towards all concerned- it's really something special. Great, satisfying ending, good music too!
5 people found this helpful

DanielReviewed in the United States on June 24, 2021
5.0 out of 5 stars
Remnant of a time when dumb comedies could be smart at the same time.
Verified purchase
Zoolander is a gem that doesn't loose its appeal upon review. There are subtleties that you likely won't catch and elements to the story that keep it relevant, especially today.

This was a film that addressed problematic elements of Hollywood and the fashion industry at a time when there wasn't nearly as much cultural outrage as there is today. It did it in a ribbing manner that never undercut the lighthearted tone the film was going for. You may find this approach to criticism paltry in comparison to the methods used today, but awareness is awareness and exposure helps, no matter the context.

It's refreshing to watch a comedy that can make you laugh at absurdities and even atrocities without feeling like some political message is being shoved down your throat. The ham fisted approach that is often taken today when including politically charged elements like representation and diversity in entertainment often prioritizes criticism over characterization, humor, tonal consistency, and plot. The result is that diversity wasn't as easy to find in mainstream media ten and twenty years ago, but when it was there, it felt more genuine and sincere than it often is in media today. I don't believe this is because the creators involved in producing this content are necessarily less sincere in their inclusiveness, just that prioritizing a political message often comes at the expense of elements of storytelling that keep viewers engaged and emotionally invested.

The film may contain a lot of idiocy humor. It may not be saying anything profound or politically charged. But my position is that these factors are precisely what makes this film so important to me. Behind the humor and light political commentary, the true heart of this film is in the endearing characters and emotionally sincere moments that show the people involved with its creation loved the idea they were trying to bring to life and didn't treat the audience like an ignorant child that needs to be talked down to.
One person found this helpful

Pop BopReviewed in the United States on March 31, 2018
4.0 out of 5 stars
Taking Crazy Pills
Verified purchase
This is a never ending compilation of memorable lines and bits. While the overall movie plot - "Manchurian Candidate" meets "Devil Wears Prada" - is a stretch, individual scenes are such classics of cluelessness that you have to love Derek. Cameos, (Duchovny, Bowie), are the icing on the cake.
5 people found this helpful

Glama PussReviewed in the United States on June 29, 2021
4.0 out of 5 stars
Time capsule...
Verified purchase
of the 80s and early 90s. Zoolander is a super sendup of the modeling business with no need to name drop as everyone is in it including a future president of the United States and his wife. Great comedic trip down memory lane. Hilarious and hilariously stupid as the title character. No good comedies these days, perfect timing to watch this in the dismal year of 2021. Highly recommend.
See all reviews
Back to top
Get to Know Us
Make Money with Us
Amazon Payment Products
Let Us Help You
EnglishChoose a language for shopping. United StatesChoose a country/region for shopping.
© 1996-2022, Amazon.com, Inc. or its affiliates