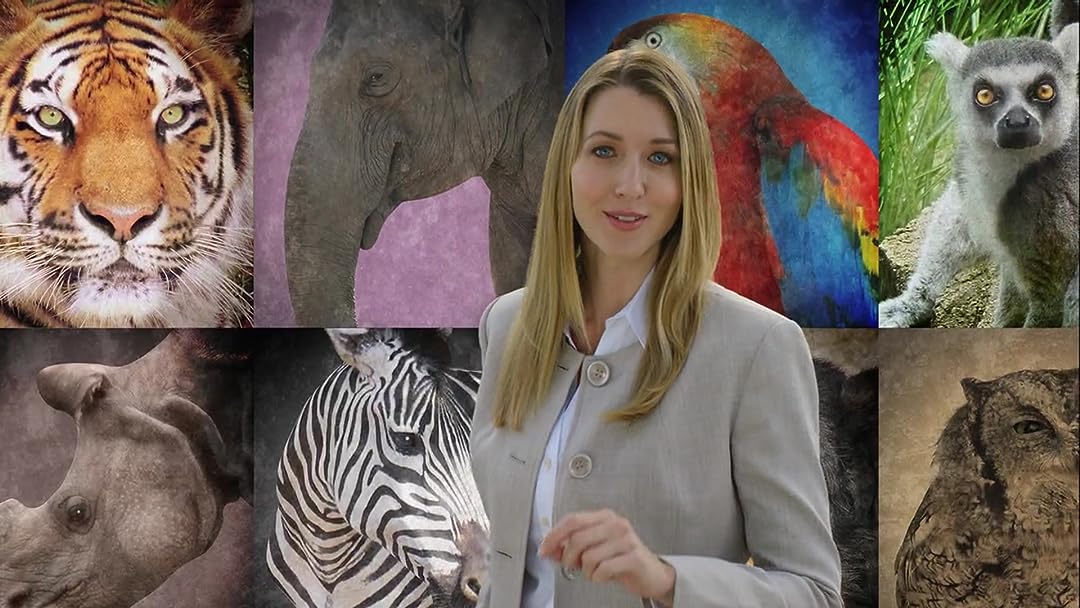 (217)
3.31 h 27 min201613+
When a strange virus quickly spreads through a safari park and turns all the zoo animals undead, those left in the park must stop the creatures before they escape and zombify the whole city.

Linked Universe Discord Movie ClubReviewed in the United States on June 26, 2021
5.0 out of 5 stars
Absolutely Ridiculous, 10/10
Verified purchase
This was SUCH a movie. They really don't make 'em like this anymore. The Asylum my beloved.

A lot of these characters were very unlikable but luckily all the bad ones kinda died except for Ellen. Gage did a 100% 180 and stopped being a piece of garbage like 20 minutes in? Amber is the worst part of the whole movie but the payoff was that you get to basically watch her die Twice.

The amount of one-liners in this film was phenomenal. "I don't care about protocol." The bit where he was like "GO FIND YOUR PURPOSE" apropos of absolutely nothing was so great.

The CGI in general + the little girl TEARING A KOALA IN HALF WITH HER BARE HANDS were the best parts of the movie. The gorilla suit??? Flawless. The green screen??? Totally not obvious in any way shape or form and definitely not a random scene in the middle of the movie where the quality dropped to 2004 high school project level. Totally not.

The MONKEY was a CHESTBURSTER ALIEN.

They got surrounded by FOUR ENTIRE LIONS without NOTICING.

melanieReviewed in the United States on July 28, 2019
4.0 out of 5 stars
What if I told you the Garden of Eden was not a myth?
Verified purchase
The Eden Wildlife Zoo is a refuge for endangered species of animals. Today is orientation day for the zoos new interns. College students who are applying for jobs are touring the zoo.

In the meantime, some of the monkeys have contracted an unknown virus. One of the monkeys suffers cardiac arrest. The zoo’s vet gives one of them intracardiac epinephrine. The drug is not allowed for primates. The reaction it has with the virus turns the primate into a zombie. The virus spreads to all the monkeys in the room turning them into zombies. They attack the vets. One of them manages to activate the alarm.

The alarm reaches the zoo's security area. A team is sent to find out what is happening. They are attacked and several of the infected monkeys escape. The only team members that manage to survive are Rex (Marcus Anderson), Lizzy (Ione Butler) and Gage (Andrew Asper). Dr. Ellen Rogers (Kim Nielsen), the manager of the zoo, gets word of the devastation. She immediately locks down the zoo.

With the monkeys on the loose, the disease spreads throughout the zoo. They rescue Amber (Brianna Chomer), who was being attacked by infected giraffes. In a panic she steals the security jeep and leaves her rescuers in the lurch. Lizzy, Gage and Rex are forced to use a group of non-infected elephants as transportation.

A police team arrives and is killed by infected lions. When Ellen’s daughter Thea (Lala Nestor) is attacked by a Koala she kills it with a baseball bat. Ellen inspects the Koala’s blood. She finds that a disease was created by an unknown enzyme found in the koala's cerebral cortex. Whatever this is, it’s affecting every animal in the zoo.

“Zoombies” was released in 2016 and was directed by Glenn R. Miller. It’s an Asylum Picture so I wasn’t sure what to expect. I found it to be a wild ride and so much more. It was action packed and over the top. The special effects went from decent to really good. The whole thing was just a blast.

Keep in mind this is The Asylum so there isn’t going to be state of the art anything. Plus the little girl manages to do things that adults can’t. Kill something. Yes, the characters are your basic horror movie victim types. And the plot was basically, everything’s a zombie that wants to kill humans. It was still fun. I certainly didn’t expect anything more than that. The main fun is seeing what zombie anything other than people looks like. I knew that zombie monkeys were going to look freaky but, a zombie giraffe? How about a zombie koala? Suffice it to say, everything looks nasty when it has fangs and glowing, bulging eyeballs and wants to rip your face off.

If you like mindless mayhem and lots of blood and gore, it’s a well spent 87 minutes.
3 people found this helpful

Linda LeeReviewed in the United States on June 12, 2020
1.0 out of 5 stars
Well, that turned out to be a forgettable movie
Verified purchase
It turns out that I had watched this before, but didn't submit my review. So, I'll finish it now.
Practically everyone dies. The skinny nerd in he suit and tie tuns into Rambo.
A spider monkey was zombified by some unknown cause. It infected others, and they killed people and turned the rest of the zoo animals into zoombies.
The little girl with dimples was strange. Good actress. She played her role down to the T.
Why the director chose to regularly speed up the film was odd.
Speeding up activity to unnatural speeds was bad enough.
Speeding up nearly every talking scene was seriously difficult to comprehend.
The scenery was beautiful
Most of the CGI monkeys were great The zombie giraffes were unbelievable.
Now that I've seen this twice, I won't be watching it again.
This is not a family movie. I advise against letting young children watching this. The animal aggression and gore are too vivid.
2 people found this helpful

The writers should either get awards for a lack of a plot holes... due to no plot, or totally laughed out of the business after this one.

Which brings me to directing. Not sure who or what was doing it... if at all.

Acting, again is a tricky one. Were they that bad all on their own? Or was someone actually trying to direct them to be that bad?
5 people found this helpful

EinsatzReviewed in the United States on March 17, 2016
4.0 out of 5 stars
“Eden is not just a zoo, it’s an adventure.”
Verified purchase
For reasons unknown and never stated, some monkeys at the Eden Zoo have gone a bit funny. One aggressively dies and a crazy doctor insists on reviving it. “I don’t give a damn about protocol! This animal must live!” And it does, sort of, in a round about fashion. But. Almost instantly. Its little friends go the same way and soon chomp to death a batch of numbskull doctors. Naturally, as idiots abound in this zoo, they open the secured door of the lab, releasing the undead critters into the zoo. To keep the movie going on this threadbare plot, these rambunctious beasties quickly infect all the other animals. It’s a race against time to see who lives and who dies. Since they began this opus with a bus load of interns..........they had more than enough bodies to go around.

I have to say my favorites were the zombie giraffes.

It was an interesting concept, poorly executed. None of the action lives up to the spiffy artwork on the DVD cover. The CGI is sparse; the characters are very basic, straight out of central casting, stereotypes all. The suspense is minimal. There are no scares. CGI splatter is not the same thing as good old fashioned gore. And there’s a little girl too precious for her own good (LaLa Nestor).

I found it entertaining enough to keep it for later viewings but it’s not top shelf material. The screenplay must have been written with a crayon. If you enjoy junk-food-flicks, not filling enough to truly satisfy, you might like this time waster. I did, up to a point.
16 people found this helpful

Kevin CarhillReviewed in the United States on September 14, 2019
2.0 out of 5 stars
Holy... Lord
Verified purchase
To be fair, the premise isn't bad, and I do believe that the director, Glenn Miller, has some talent. The pace was good, he kept the camera moving (not in a shaky cam kinda way, just that you could tell he was working to frame interesting shots)... But man, oh man was this movie a pile of turds... My biggest issue is the CGI was SOOO bad that it completely took me out of the movie... The best actor was the 8 year old girl... The plot was nonsensical and none of the characters had any depth so you don't care what happens to them... I would say that Jurassic Games is a much better exploitation film.
4 people found this helpful

Cris KamuraiReviewed in the United States on July 10, 2021
1.0 out of 5 stars
"Not Even a Dead Monkey is a Good Monkey"
Verified purchase
Horrible watch, probably won't watch again, and can't recommend.

It's actually a pretty great concept, a disease starts in an animal re-animating it, jumping across species as infection sets in.

There are missed opportunities in this, but the two biggest problems are some subpar acting, and horrible CG, which may account for some of the bad acting, depending upon how they shot the live action shots.

When it comes down to it, the animal zombies are like really bad versions of the lickers from "Resident Evil", it's not that there isn't anything worth watching in this, but there just really isn't enough.
One person found this helpful

Blake KingReviewed in the United States on June 25, 2019
4.0 out of 5 stars
Surprisingly enjoyable
Verified purchase
Actually enjoyed the movie more than I thought I would, but please look into how guns work to make it a little more believable. 1911's hold 7+1 rounds. A shotgun as short as the one the guy was carrying in the aviary, can't hold more than 5 - 2 3/4" shot shells and that's being generous. More realistically, probably like 4 at most with one in the chamber and 3 in that short ass tube. Both people fired around 15 times each in the aviary so where's the reloads? Reloading is more realistic and also more suspenseful/more drama. As in "can he/she finish reloading before getting attacked by the birds?". Also a 1911 for bird shooting?!? At least throw in some misses. Moving birds are challenging to hit with a shotgun, much less a 1911. Just some critiques. But overall, I did enjoy the movie.
One person found this helpful
See all reviews
Back to top
Get to Know Us
Make Money with Us
Amazon Payment Products
Let Us Help You
EnglishChoose a language for shopping. United StatesChoose a country/region for shopping.
© 1996-2021, Amazon.com, Inc. or its affiliates