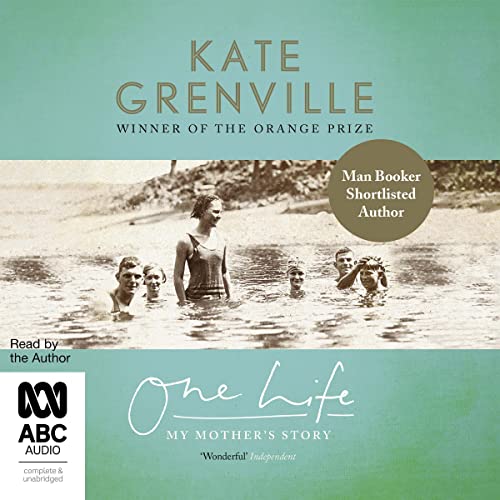 One Life: My Mother's Story

Nance was a week short of her sixth birthday when she and Frank were roused out of bed in the dark and lifted into the buggy, squashed in with bedding, the cooking pots rattling around in the back, and her mother shouting back towards the house, "Good-bye, Rothsay, I hope I never see you again!"

When Kate Grenville’s mother died, she left behind many fragments of memoir. These were the starting point for One Life, the story of a woman whose life spanned a century of tumult and change. In many ways Nance’s story echoes that of many mothers and grandmothers for whom the spectacular shifts of the 20th century offered a path to new freedoms and choices.

In other ways Nance was exceptional. In an era when women were expected to have no ambitions beyond the domestic, she ran successful businesses as a registered pharmacist, laid the bricks for the family home, and discovered her husband’s secret life as a revolutionary.

This title is not available for you

Sorry, this title is no longer available. Please try using the search feature as another version of this work may be available. If you think we've made a mistake, please contact Audible Customer Care at 1-888-283-5051.

Amazon Customer
2.0 out of 5 stars Historical novel rather than biography
Reviewed in the United States on October 28, 2015
Verified Purchase
I found this 'biography' rather annoying. Kate says in the introduction that she found notes her mother had made but we do not know which is her mother's story and which is Kate's. There is so much material that is obviously imagined and made up by Kate that it cannot be considered a biography. She is a fiction writer of note and she can draw wonderful word pictures of situations, which she clearly did in this book. She has also done research on what was happening around the times her mother and family were living. However, as a result of her 'madeup' scenarios and the inclusion of historical data, this book reads rather more like an historical fiction novel than a biography. Also, there seems to be a clear bias against the grandmother, Dolly, who gets some consistently nasty treatment from Kate. Kate seems to have obviously loved her mother but absorbed the angst her mother hand for her mother (Kate's grandmother) and the result is a rather lopsided book, predictable in its biases. Didn't enjoy it, was rather annoyed by it as I had been expecting something better.
Read more
One person found this helpful
Helpful
Report abuse

Ruth K Hallmark
5.0 out of 5 stars Mothers and daughters
Reviewed in the United States on March 21, 2016
Verified Purchase
I loved this book it was beautifully told by a daughter who used scraps of notes written by her mother the book had all the elements of poignancy, hum our and sentiment I heartily recommend
Read more
One person found this helpful
Helpful
Report abuse

Iris Mullins
4.0 out of 5 stars a moving read
Reviewed in the United States on April 4, 2015
Verified Purchase
From experience and writings by her mother Kate Grenville has crafted a biography of her mother that shows the extraordinary of ne woman's lies. How chance or circumstances direct a path and how choices interact and modify. I wish the story were longer to find out more about Nance's teaching and her reflections on that. Kate explains why this part of Nance's life is only briefly covered.
I imagine there are many other fragments of lives in boxes and caes.
Read more
Helpful
Report abuse

Kindle Customer
5.0 out of 5 stars Wonderful memoir
Reviewed in the United Kingdom on December 20, 2020
Verified Purchase
It is a moving and beautifully written book of memories of the authors mother.I enjoyed it enormously.
Read more
Report abuse

Tree Cutter
5.0 out of 5 stars Bought on recommendation
Reviewed in the United Kingdom on March 10, 2017
Verified Purchase
I have not read this, but on recommendation bought this book for my 97 year old aunt and she loved it.
Read more
One person found this helpful
Report abuse

Sjkirby
5.0 out of 5 stars A cant put down read
Reviewed in the United Kingdom on July 13, 2016
Verified Purchase
oh!!!!!! cant put it down ;arrived this morning and abandoned all housework in favour of book .A realife story of a real struggling short on parental love childhood thro to adulthood .A touching everybody has one of the moments story so well written you feel you were in the room EXCELLENT as all her others
Read more
Report abuse

Diane Wiles
2.0 out of 5 stars Dull
Reviewed in the United Kingdom on February 3, 2020
Verified Purchase
Well written but boring and one dimensional, we all have life stories.
Read more
Report abuse
See all reviews