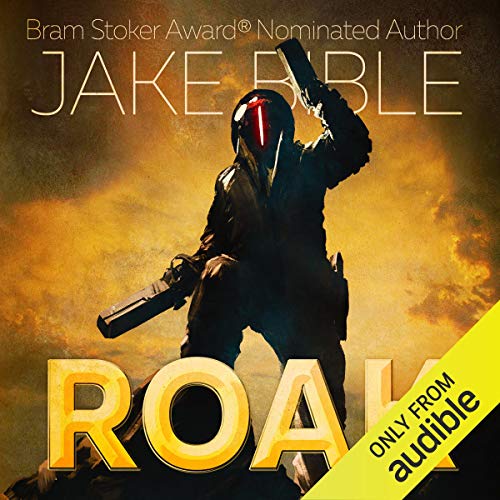 There are thousands of bounty hunters across the galaxy. Solid professionals that take jobs based on the credits the bounties afford. They follow the letter of the law so they can maximize those credits.

No criminal or military records. No files or folders with his name on them. No cybernetic implants to track. No proof he even exists except for a reputation for getting the job done. Roak is the bounty hunter called when someone is looking for the opposite of licensed, bonded, legal.

Now someone has ignored his reputation and made a very big mistake.

Double-crossed and left to die, Roak survives and sets out to exact vengeance and get paid what he is owed.

But he's not unreasonable.

While his fee may have just gone up, the bloody, brutal revenge is on the house.

4.1 out of 5 stars
4.1 out of 5
206 global ratings
How are ratings calculated?
To calculate the overall star rating and percentage breakdown by star, we don’t use a simple average. Instead, our system considers things like how recent a review is and if the reviewer bought the item on Amazon. It also analyzes reviews to verify trustworthiness.
Top reviews

Segiroth
4.0 out of 5 stars Nonsense, but hey its really fun
Reviewed in the United States on October 17, 2018
Verified Purchase
If you like the Babylon 5/Flash Gordon style of SF with magic aliens gods and such, then the book delivers a space western levels of fun. We get guns, evil gangsters, more guns, some alien sex and a lot of fighting.

If you try to take the protagonist seriously then you will probably hate the book. His main purpose is... "pay up", like a nagging clerk or tax collector more than a mercenary/assassin, zero logic but "THE RULES" must be obeyed and payment must be given.

As an over the top SF comedy its worth checking out, but if you are looking for a hard realistic science fiction entry do not bother.
Read more
One person found this helpful
Helpful
Report abuse

Daniel Delgado
4.0 out of 5 stars Fun Space Story
Reviewed in the United States on March 21, 2017
Verified Purchase
Roak is a bad ass bounty hunter with a code. That code is based solely on logic, which should make it simple and reliable. However, the irrationality of everyone else causes him tremendous grief.

I always like it when characters are fallible. Juggernaut killing machines just aren't very fun to read about. Roak is maybe a bit too fallible though. It seems like he gets his ass kicked too hard, too often. His mission success rate also doesn't appear to measure up to his reputation.

Overall the book is fun and definitely worth reading, especially for Jake Bible fans. It doesn't quite live up to the Z-Burbia series, but then not too many books have made me laugh (actually out loud) as hard as those.
Read more
3 people found this helpful
Helpful
Report abuse

Erin Penn
VINE VOICE
4.0 out of 5 stars Rip Roaring (Bloody) Action
Reviewed in the United States on December 12, 2016
Verified Purchase
Reaction after reading the Amazon Sampler at 10:00 pm
Roak begins with a bang. I am not sure I like the main character, but between the opening scene, his assurance (and knowledge of his limitations), his perseverance, and his honesty in the first four chapters, I want to get to know the character and so purchased the book after reading the Amazon sample. Mr. Bible has nailed how to get interested in a story and character.

When I first read the teaser about how the character is beat to a pulp and survives, I was like - sure, well, usually an extreme description - so I went looking. It's all there in the first four chapters. The book delivers on the book blurb. Now to see how the rest of it unfolds.

Reaction the next morning with the book done after reading until 3:00 am
So sleeping is optional when reading is involved. Have you ever noticed that? Especially for a rip-roaring action adventure. I think the book ended with more questions than answers. You understand Roak as a person with values by the end of the book, but have no clue about his history. And you sooooo want to know more, so it is fortunate it looks like the story may be a new series for Mr. Bible. Roak is a character to know ... through reading. Having him as a friend would be a bit, how to put it, explosive?
Read more
24 people found this helpful
Helpful
Report abuse

TRC
4.0 out of 5 stars Another Solid Read by Jake Bible
Reviewed in the United States on January 18, 2017
Verified Purchase
Jake Bible always writes some enjoyable books. Roak is a fun read, and I am looking forward to follow-on stories about our favorite bounty hunter. I read for escape... I am not a literary aficionado (snob). I read for light personal enjoyment. I call them "Snicker-Bar Books"... they may not have a lot of nutritional value, but they are fun to read. Jake Bible is a solid author who routinely grinds out good stories. Thanks Jake... and... if that is your real name... it is totally cool.
Read more
4 people found this helpful
Helpful
Report abuse

Michael
4.0 out of 5 stars Well written sci-fi action
Reviewed in the United States on September 6, 2017
Verified Purchase
A good read. It is like a slightly more rough and tumble version of James Bond (if Bond were a freelance bounty hunter), but set in a future where space travel is common and healing technologies are well advanced from what we have now. The story flows smoothly. There are no weighty discussions of the future of humankind or deep philosophical ponderings about the place of humans in the universe. It is a straight up action/adventure sci-fi that never pretends to be anything else. For some that might be a drawback. I found it refreshing.
Read more
One person found this helpful
Helpful
Report abuse

Kindle Customer
5.0 out of 5 stars Action filled sci-fi.
Reviewed in the United States on February 1, 2017
Verified Purchase
I was curious about the whole bounty hunter idea. My curiosity was deeply satisfied by the in depth descriptions of space ships, aliens, alien worlds, and the none stop blood and gore. The main characters aren't nice people and the entire story line reminds me of Las Vegas and the Miami mob scene. The author makes it work from beginning to end and I can see the possibility of further adventures.
Read more
5 people found this helpful
Helpful
Report abuse

James I. Kastner
4.0 out of 5 stars Kicking names and taking @55
Reviewed in the United States on September 11, 2019
Verified Purchase
Jake Bible. Author of Zeburbia. Roak Galactic Bounty Hunter. Not as funny as Zeburbia but pretty entertaining. The main character gets a hold of a new spacecraft that has a very fascinating AI programmed into it and they become partners. Kicking Names and Taking Ass
Read more
Helpful
Report abuse

Jolyane Justice
5.0 out of 5 stars ROAK:Galactic Bounty Hunter
Reviewed in the United States on September 10, 2019
Verified Purchase
Fantastic story with a complex protagonist and an great cast of friends and enemies. Especially enjoyed the AI characters and the descriptions of the planets and space stations. Everything a great Science Fiction story should be
Read more
Helpful
Report abuse
See all reviews

Douglas Clark
2.0 out of 5 stars About a Bounty Hunter with no redeeming features. Give it a miss.
Reviewed in the United Kingdom on September 19, 2017
Verified Purchase
Roak is Bounty Hunter who is obsessed with money. His whole personality is based on the idea that he must get his chits (untraceable money) for his work, other than this there is almost no character development. He is almost indestructible and when he does get hurt the medical pod fixes him in almost no time.
There is a huge body count in the book which mainly consists of mafia type bodyguards and other badies who get in Roak's way. When innocent bystanders get injured Roak's attitude is "so what".
Half way through he picks up some unbelievable helpers/partners without whom he would probably be doomed.
I did manage to get to the end so I have elevated it to 2 stars. I will not be reading the next installment.
Read more
Report abuse

PJ Bookish
5.0 out of 5 stars Pay up and walk away.
Reviewed in the United Kingdom on December 10, 2016
Verified Purchase
Pay the money owed and walk away, don't pay and Roak becomes a very unhappy man.
Roak isn't exactly a good guy but he isn't a bad guy either. He is a man with a code though and he cleaves his way across the galaxy in pursuit of justice, leaving a trail of destruction in his wake.
Bloody, gory, sometimes quite emotional, I loved this story from the gruesome beginning.
Another fantastic book from Mr Bible, Roak is my new hero.
Read more
2 people found this helpful
Report abuse

Frank
5.0 out of 5 stars ROAK
Reviewed in the United Kingdom on July 6, 2017
Verified Purchase
Great read. Expert story telling. A prequel might answer a few questions but it doesn't really matter. Got me hooked, a sort of Han Solo without the good guy persona. Perhaps a Jack Teacher mixed up!
Validly waiting the next instalment.
Read more
Report abuse

TempestS
4.0 out of 5 stars Four Stars
Reviewed in the United Kingdom on March 28, 2018
Verified Purchase
This wasn't what I was expecting, its a bit mad but enjoyable.
Read more
Report abuse
See all reviews
Back to top
Get to Know Us
Make Money with Us
Amazon Payment Products
Let Us Help You
EnglishChoose a language for shopping. United StatesChoose a country/region for shopping.
© 1996-2022, Amazon.com, Inc. or its affiliates