When Mathew accidentally finds himself trapped in Lestrange's house, he opens a door and falls four hundred years into the future. Unwittingly, he starts to destabilise the course of human history.

The Boy Who Fell from the Sky delves into a future where climate change and technology have transformed our world. It is the first book in The House Next Door trilogy. 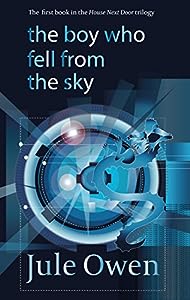 1
The Boy Who Fell from the Sky (The House Next Door Book 1)
by Jule Owen (Author) , Jule Owen (Illustrator)
4.3 out of 5 stars (547)
It is 2055. Floods have devastated London. Confined to his house with only his cat, his mother's domestic robot, and his holographic dragons for company, Mathew Erlang is desperate for a distraction. He finds it in his peculiar and reclusive neighbour, August Lestrange. When Mathew accidentally finds himself trapped in Lestrange's house, he opens a door and falls four hundred years into the future. Unwittingly, he starts to destabilise the course of human history. The Boy Who Fell from the Sky delves into a future where climate change and technology have transformed our world. It is the first book in The House Next Door trilogy.
Read more

A boy hacks into his own future to try to save his mother from a mysterious virus.

When Mathew Erlang’s mother becomes seriously ill, he’ll do anything he can to save her and he knows his future self would too.

Alone in an England afflicted by extreme weather, biological warfare and civil war, Mathew needs to find his older self before Lestrange catches up with him and takes him back to his own time.

Q: This is the second book in the series. Will there be any more?

The Boy Who Fell from the Sky is part of the House Next Door trilogy, a series of three dystopian science fiction novels. Silverwood, which is the next is the series is already available. The third and final part, The Moon at Noon will be out in December 2015. Look out for the box-set in early 2016.

Q: Does the world really need any more teen dystopia?

Absolutely. Personally, I can’t get enough of them. What I love about dystopian science fiction is it allows you to build worlds and explore ideas on a scale that it’s difficult to do in realist fiction. But I’m hoping Silverwood and the other novels in the House Next Door trilogy offer a tiny bit of a different spin on the genre. This story is set in our own world. It starts in 2055, forty years from now, so the world is recognisable, but there are many differences in terms of everyday technology, plus climate change has already really started to kick in. When the novel opens, London has been flooded, the underground is under water, people have lost their homes. But this is also time travel fiction, so you also get to see what the world will look like in four hundred years time. If the scientists are right about climate change, then Siberia could be a tropical jungle by then.

Q: Where do you get your ideas from?

About ten years ago, I started reading The New Scientist and around the same time I came across a book by a theoretical physicist called Michio Kaku. He writes these fun books, trying to make science accessible to people by being playful. He does things like try to work out whether you can really make a light sabre or an invisibility cloak. I became fascinated by all these ideas and by the incredible possibilities of science and technology. We’re living through this huge explosion in technological innovation. It will transform many people’s lives for the better. But it also has its dark side. And, of course, then there’s climate change. I started reading avidly and widely about all these things. I built a timeline of what the various sources were saying may happen. I wanted to imagine what it would be like to live in the future, so I decided to write time travel fiction. I list all my sources on my website, if you want to find out more.

Q: Don’t you worry you’ll get the future wrong?

I write about this on my blog. It is impossible to predict the future (unless you have been there an come back like Mathew). Although some of the best augers have been science fiction writers and for every silly prediction they have made, there’s an uncannily accurate one.

Mathew Erlang travels north through an England overrun by violence and sickness. Accompanied by a new friend, he finally makes it to his grandmother’s house, but all is not as it seems in this childhood place of safety. Meanwhile, Clara makes an uncanny pact with Mathew’s peculiar neighbour and finally learns the truth about Mr. Lestrange.

Q: What made you want to write YA time travel fiction?

I love books like the Hunger Games and Divergent. I also love books like Patrick Ness’s Chaos Walking and Chuck Wendig’s Heartland Trilogy. They are all exciting, deeply engaging dystopian action adventure series. They all make you stop and think. So I wanted to write something similar. But I’ve been reading about futurology and climate change for years and they have seeped into my subconscious. I liked the idea of exploring possible futures based on the non-fiction I’d be reading. To do that I needed Mathew Erlang, my main character, to be able to jump forward into the future to see how things turn out.

Q: Why specifically write teen dystopia? Why not write for adults?

I’m not sure I am specifically writing just for teens. I read a lot of young adult fiction and I’m certainly not a teen! But when I built the world and the much bigger story that Mathew’s tale exists in, he happened to turn out to be a teenaged boy at the beginning of his series.

Q: You describe your books at cli-fi. What does that mean?

Cli-fi means climate change fiction. It’s a spin on sci-fi, of course, but it’s a type of dystopian science fiction or speculative fiction that specifically deals with the impact of climate change on the people of the future.

Q: Why did you want to write about climate change?

It’s the big issue of our times and the biggest challenge we’ve faced as a civilisation. There’s a huge scientific consensus about the fact that climate change is man made and that it is likely to massively disrupt our lives in the future, but lots of people don’t believe in it. I read an article a while ago in The New Scientist (which is my favourite magazine) saying that the climate change lobby needs more artists and writers to go and spread the message. Frighteningly, young people, who are likely to suffer the most in the future, are particularly not engaging with the issue.

Q: Is this it for Mathew? Are there no more stories?

This is the last book in the 'House Next Door' trilogy, but I am already working on the first book in a new series. It tells the story of the Kind and the Lamplighter, characters that appeared at the end of 'The Boy Who Fell from the Sky'. Plus, I don't think I'm quite done with Mathew yet. We'll have to see. 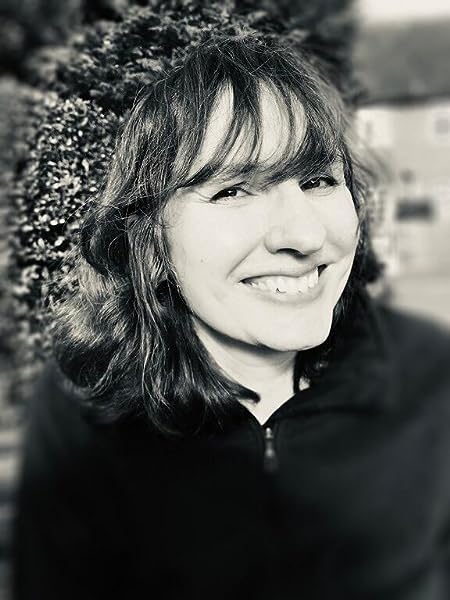 Jule Owen was born in the North of England. She now lives in the south, where the people are surprisingly friendly, the weather is warmer, and there are more museums, but she misses the wide-open spaces and the excellent quality tap water.

Her working life has been spent helping businesses build online technology, including a short stint in the video games industry. These days, she helps build tech products that involve automation and machine learning.

Her books are her creative response to the exponential growth of technological innovation in the era of climate change, with a bit of magic thrown in.