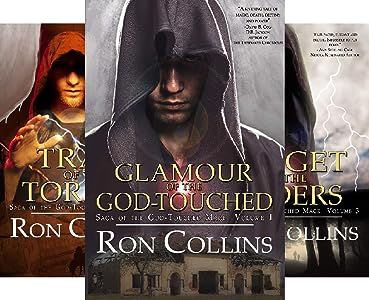 Garrick is a mage’s apprentice, soon to be a full-fledged sorcerer. The course of his life is clear—he will be an apprentice, a mage, and then a superior. But a tragic accident finds him wielding a god-like power over life and death, and as rumors of mage war grow stronger around him, he learns his future is not fated to be as simple as he dreamed. Glamour of the God-Touched follows Garrick as he discovers the forces behind his new magic. The lessons he learns and how he deals with them will threaten the very nature of who he is.


“A riveting tale of magic, death, destiny, and power.”

- David B. Coe/D.B. Jackson
Author of the Thieftaker Chronicles
Read more
You've subscribed to Saga of the God-Touched Mage! We will preorder your items within 24 hours of when they become available. When new books are released, we'll charge your default payment method for the lowest price available during the pre-order period.
Update your device or payment method, cancel individual pre-orders or your subscription at
Your Memberships & Subscriptions
There was an error. We were unable to process your subscription due to an error. Please refresh and try again.
Price: $16.92 for 8 item(s)
Sold by: Amazon Digital Services, Inc.
Items included: 1 - 8
Books in this series (8 books) 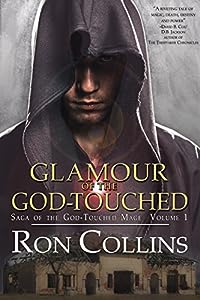 Garrick is a mage’s apprentice, soon to be a full-fledged sorcerer. The course of his life is clear—he will be an apprentice, a mage, and then a superior. But a tragic accident finds him wielding a god-like power over life and death, and as rumors of mage war grow stronger around him, he learns his future is not fated to be as simple as he dreamed. Glamour of the God-Touched follows Garrick as he discovers the forces behind his new magic. The lessons he learns and how he deals with them will threaten the very nature of who he is.


“A riveting tale of magic, death, destiny, and power.” 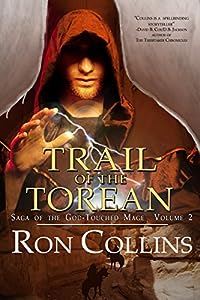 2
Trail of the Torean (Saga of the God-Touched Mage Book 2)
by Ron Collins (Author)
4.2 out of 5 stars (30)
Cursed magic from the gods.
A mysterious underground city.
The first steps toward open war.


Garrick is determined to be rid of a devastating magic that threatens to take over his life. Together with Darien—the son of a military man—he accepts a quest for a commission that promises enough to pay for the sorcery he'll need to break that magic's hold. Along the way he faces powerful forces as ancient as the plane itself, encounters the beautiful leader of a sect of freedom-minded, independent mages, and finds himself in the crossfire of a Lectodinian and Koradictine gambit against the most powerful Torean mage in the region.

Trail of the Torean follows Garrick as he lives with his treacherous new magic, discovers exactly how deep his connection to the god-like planewalkers might be, and finds that the very future of magic across the entire plane of Adruin hangs in the balance.

"Collins is a spellbinding storyteller."
– David B. Coe/D.B. Jackson
Author of the Thieftaker Chronicles
Read more 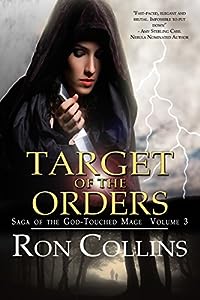 3
Target of the Orders (Saga of the God-Touched Mage Book 3)
by Ron Collins (Author)
3.7 out of 5 stars (20)
A god-touched mage.
A headstrong rebel.
Magewar to the west.

All Garrick wants is to be left alone. But when he and Darien return to Caledena, they find the mage orders have taken control, and that those same orders want Garrick—dead or alive. The orders have begun their war, and Garrick may be the only mage who can keep them from victory.

Target of the Orders finds Garrick hunted by Elman, an ambitious Lectodinian mage, and by Sunathri, the beautiful leader of the newly formed independent Torean House. But Garrick has bigger problems than these. To survive, he will have to control the dark magic inside him and suffer the twisted politics of the god-like planewalker who is using Garrick for his own purpose. When Garrick discovers the depths of the planewalker’s designs, he realizes there is more at stake than simply controlling the plane.

Can Garrick survive his own magic? Can he survive powers greater than he can conceive?

Is he free to choose? 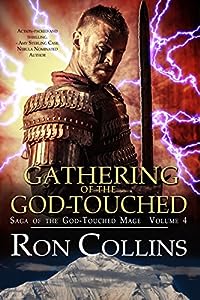 Garrick is a young mage inflicted with a chaotic magic tied to a powerful planewalker. He has never wanted anything more than to live his life in peace. The fact of his god-touched power, however, means the two powerful orders that control magic across Adruin will not rest until he is dead. Tired of running, Garrick decides to face his destiny in direct contests with the orders’ god-touched mages. Darien, the son of Dorfort’s commander, and Sunathri, the leader of a faction of independent mages, understand that the freedom of the entire plane is at stake, so they lend him their blades in support.

To succeed, they will have to use Garrick as bait, convince the leaders of Dorfort to join them, and face the horrors of war against the overwhelming strength of the orders’ armies as they convene their forces at the shadows of the legendary God’s Tower.

Gathering of the God-Touched follows Garrick as he faces the repercussions of his magic, and grows to understand what it means to have a place in the world. Along the way, he discovers the plane’s ultimate destiny may well lie in places far more exotic than anyone could expect

“Action-packed and thrilling, Garrick faces his greatest challenge yet in Gathering of the God-Touched.” 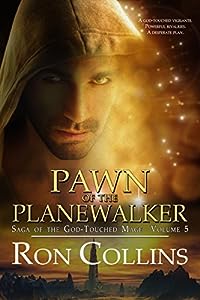 5
Pawn of the Planewalker (Saga of the God-Touched Mage Book 5)
by Ron Collins (Author)
4.1 out of 5 stars (11)
A god-touched vigilante.
Powerful rivalries.
A desperate plan.


After a hollow victory at God’s Tower, Garrick seeks vengeance from mages who have wronged him. But a call from Darien brings him back to Dorfort, and the machinations of his god-like superior take him to Rastella, a cold and distant plane that is ruled by a man who has stolen control of the plane’s magic. All the while, the remaining mages of the Koradictine order, thought to be devastated after the battle at God’s Tower, hatch a breathtaking plan to reclaim their glory.

Pawn of the Planewalker follows Garrick as he discovers the vastness of Existence. Can Garrick save magic in Rastella? Will doing so create greater disturbance elsewhere? Can he return to his own plane in time to save those he loves? And, finally, what part must Garrick play in the schemes of the planewalker who controls the very power that drives him?

The answers to these questions will define the course of history. 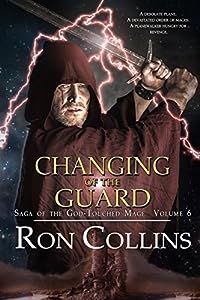 6
Changing of the Guard (Saga of the God-Touched Mage Book 6)
by Ron Collins (Author)
4.0 out of 5 stars (11)
A desolate plane.
A devastated order of mages.
A planewalker hungry for revenge.

Garrick has agreed to lead the independent Torean mages, if for no other reason than to protect them from deceit and trickery of the god-like planewalkers. But when he returns to Dorfort, he finds the high superior of the Koradictine order has kidnapped Will, the boy Garrick had taken under wing. Devastated, he vows to retrieve the boy, a choice that results in being disowned by the twisted planewalker who is his mage superior. Meanwhile, the Lectodinian order launches a winter offensive designed to gain control of magic across Adruin, and the remnants of the Koradictine leadership joust for position as they enact a desperate ploy to survive.

In Changing of the Guard, Garrick is on his own as he hunts the Koradictine high superior through a trail that leads through demonic underplanes and mystical time warps. Can he survive the planes without his superior’s aid? Can he save the boy? And perhaps more important, what will remain of the orders if he survives?

The results will change the face of Adruin forever. 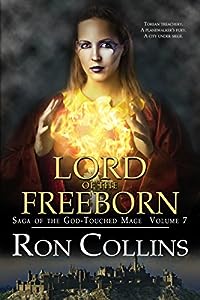 7
Lord of the Freeborn (Saga of the God-Touched Mage Book 7)
by Ron Collins (Author)
4.0 out of 5 stars (8)
Torean treachery.
A planewalker's fury.
A city under siege.

Garrick wants to bring purpose to his Freeborn mages so he can use them to protect the plane from the whims of the god-like planewalkers. After the city of Dorfort evicts the Freeborn, however, his first task is to find them a new home. The Freeborn are a flighty collection, though, filled with fiercely independent and opinionated members as well as those who are not above treachery to get their way. Unknown to Garrick, a renegade Koradictine mage who has her own ties to the planewalkers is making her last-gasp effort to remain in power. And this time Garrick himself is the target.

When the Koradictine arrives in Dorfort she unleashes an evening of terror the city has never before seen.

In Lord of the Freeborn, Garrick must fight for the survival of his order, fight for his friends, and fight to save himself. Does he have what it takes to survive a planewalker’s full fury? Can he save Adruin from annihilation? Will he live to face the truth of his full destiny? 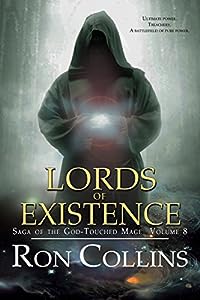 8
Lords of Existence (Saga of the God-Touched Mage Book 8)
by Ron Collins (Author)
4.0 out of 5 stars (11)
Ultimate power.
Treachery.
A battlefield of pure magic.


Garrick has destroyed a god-like planewalker, and now finds himself shunned by his superior and marked for death by the Lords of Existence. He also discovers his powers have grown to monstrous proportions, and realizes that if he loses control now he may well destroy all life in Dorfort, and perhaps even across the entire plane of Adruin. As Garrick retreats to a sanctuary deep inside the ruins of the underground city of Arderveer, the Lectodinian order seizes the opportunity to unleash their plans to storm the plane. Meanwhile, the ruling powers of Existence decide that the easiest way to punish Garrick is to exterminate Adruin.

In Lords of Existence Garrick confronts his own humanity, his banished superior, and human leaders who refuse to see the truth as he takes his fight against the planewalkers all the way into the world of All of Existence itself.

To win he may have to make the ultimate sacrifice, and every life in Adruin hangs in the balance. 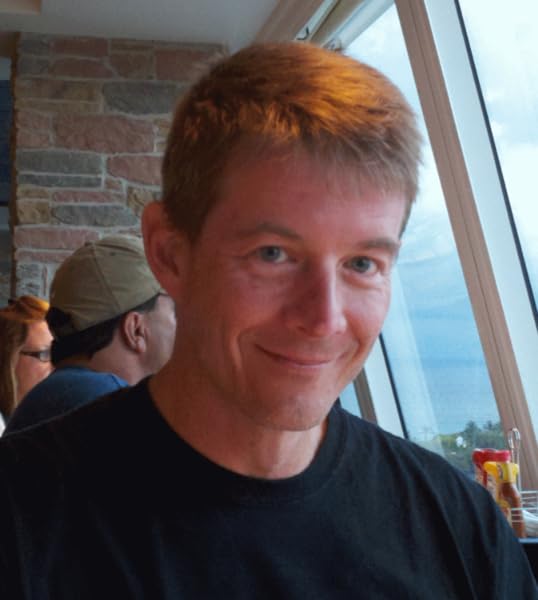 Ron Collins
Biography
Ron Collins is an Amazon best-selling Dark Fantasy author who writes across the spectrum of speculative fiction.

His fantasy series Saga of the God-Touched Mage reached #1 on Amazon's best-selling dark fantasy list in the UK (#2 in the US). His short fiction has received a Writers of the Future prize and a CompuServe HOMer Award, and his short story "The White Game" was nominated for the Short Mystery Fiction Society's 2016 Derringer Award.

He has contributed a hundred or so short stories to professional publications such as Analog, Asimov's, and several other magazines and anthologies (including several editions of the Fiction River Anthology Series).

He holds a degree in Mechanical Engineering, and worked to develop avionics systems, electronics, and information technology before chucking it all to write full time-which he now does from his home in the shadows of the Catalina mountains.
Read more
Back to top
Get to Know Us
Make Money with Us
Amazon Payment Products
Let Us Help You
EnglishChoose a language for shopping. United StatesChoose a country/region for shopping.
© 1996-2021, Amazon.com, Inc. or its affiliates