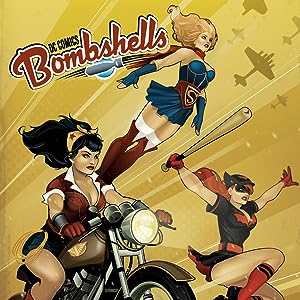 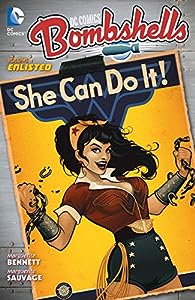 DC Comics: Bombshells (2015-2017) Vol. 1: Enlisted
by Marguerite Bennett (Author) and 3 more
4.6 out of 5 stars (317)
$9.99
The incredibly popular DC Collectibles line is brought to life in these stories that reimagine the course of history!

As Word War II rages across Europe, the Allied forces issue a call to arms for the greatest heroines the world has ever known: THE BOMBSHELLS!

KATE KANE, the all-American Batwoman; DIANA OF THEMYSCIRA, warrior Princess of the Amazons; KARA STARIKOV and KORTNI DUGINOVNA, defenders of Mother Russia; and MERA, royal daughter of the legendary Atlantis! With aid from their allies at home and abroad, these mighty women will turn the tide of war and defend those inviolable rights of Truth, Justice and Freedom.

Collects DC COMICS: BOMBSHELLS #1-6.
Read more
Other Formats: Paperback , Comic Book
Sign up and save an extra 10% on this book 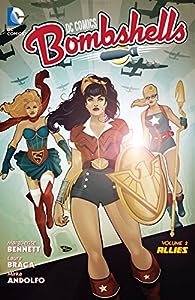 The shadow of WWII looms ever larger as the Bombshells battle the Axis Powers across the globe.

In Gotham City, a quartet of copycat BATGIRLS are doing their part to protect the home front.

In Greece, WONDER WOMAN faces a battalion of the undead, led by the villainous Baroness Paula von Gunther.

In London, STARGIRL and SUPERGIRL learn a shocking-and dangerous-family secret, while MERA encounters a monstrous threat from the sea that not even she can control.

And in Berlin, ZATANNA attempts to thwart the evil magic that's been released into the world, while the CATWOMAN and HUNTRESS rescue a captured BATWOMAN from the clutches of the Third Reich.

But the paths of these superheroines will converge as they face their greatest challenge yet. To defeat the undead tenebrae soldiers overtaking London, they'll have to form a Justice League of their own!

Inspired by the popular DC Collectibles line, DC COMICS: BOMBSHELLS VOL. 2: ALLIES throws the world's finest heroines into one of the greatest battles in history!

dWritten by Marguerite Bennett (BATGIRL, EARTH 2: WORLD'S END) and featuring artists including Laura Braga (WITCHBLADE), Mirka Andolfo (CHAOS) and more, this volume collects issues #7-12.
Read more
Other Formats: Paperback
Sign up and save an extra 10% on this book 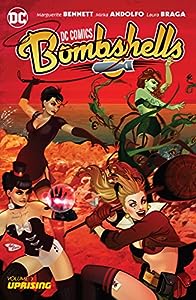 DC Comics: Bombshells (2015-2017) Vol. 3: Uprising
by Marguerite Bennett (Author) and 3 more
4.8 out of 5 stars (145)
$9.99
Based on the hit DC Collectibles product line! As World War II rages across Europe, the Allied forces issue a call to arms for the greatest heroines the world has ever known! With an old villain arising from beyond the grave, Wonder Woman, Batwoman, Kara Starikov, Kortni Duginova and Mera must aid the Allied forces while at home, a brave group of Batgirls must defend the homeland!

The incredibly popular DC Collectibles line is brought to life in these stories that reimagine the course of history! From writer Marguerite Bennett (BATGIRL, EARTH 2: WORLD'S END) and featuring artists including Marguerite Sauvage (HINTERKIND), Laura Braga (Witchblade) and Mirka Andolfo (Chaos) comes DC COMICS: BOMBSHELLS VOL. 3 collects #13-18.
Read more
Other Formats: Paperback
Sign up and save an extra 10% on this book 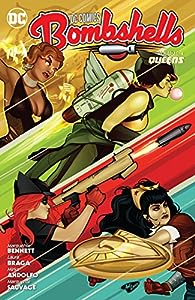 Technology and terror form an unholy alliance in a world at war, and only the heroines known as the Bombshells can shut it down!

As World War II rages around them, Batwoman, Catwoman and Renee Montoya take a journey to Africa to get help from an old ally: Vixen, Queen of Zambesi and co-founder of the Bombshells.

But they’re not alone. The lethal Cheetah has her claws out, and she’s digging them directly into a forbidden site: the dwelling place of the mechanical gods, whose incredible powers could spell triumph for the Reich and the destruction of all that the Bombshells hold dear.

Now Vixen, her fellow Bombshells founder Hawkgirl and the rest of the squadron must face their biggest threat yet! Can this brilliant but beleaguered African queen count on the support of a fellow royal-Wonder Woman-to turn the tide?

Find out in DC COMICS: BOMBSHELLS VOL. 4: QUEENS. This volume contains the debuts of Vixen and Hawkgirl-and the secret origin of the Bombshells! Collecting issues #19-24.
Read more
Other Formats: Paperback
Sign up and save an extra 10% on this book 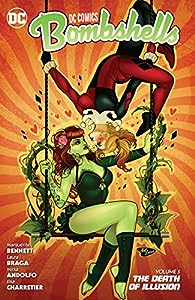 DC Comics: Bombshells (2015-2017) Vol. 5: The Death of Illusion
by Marguerite Bennett (Author) and 5 more
4.8 out of 5 stars (142)
$9.99
The extraordinary heroines known as the Bombshells are fighting on all fronts in an increasingly brutal war. Will the return of two long-lost allies—and a squad of unlikely teammates—be enough to secure victory?

One of those ready to rejoin the fight is Supergirl—but Lex Luthor and Hugo Strange have plans of their own for the Maid of Might. When Supergirl is pitted against her clone, will they find there’s room for more than one Kryptonian on this planet? Meanwhile, Raven stows away with Harley Quinn and Poison Ivy, but a mission of mercy becomes one of revenge when she meets Lois Lane!

Plus, meet French flying ace Barbara Gourdon—also known as Batgirl. Her search for her lost love brought her to the Louisiana bayou, where she disappeared for years. But when Bombshells commander Amanda Waller sends Lieutenant Francine Charles on a mission to recruit her, Batgirl and her friends Ravager and Enchantress will form a new kind of super-team: the Suicide Squad!

From writer Marguerite Bennett (BATGIRL, EARTH 2: WORLD'S END) and astonishing artists including Laura Braga (Witchblade), Mirka Andolfo (Ms. Marvel) and Elsa Charretier (HARLEY QUINN, The Infinite Loop) comes the next adventure in the DC COMICS: BOMBSHELLS saga, bringing the incredibly popular DC Collectibles line to life in stories from issues #26-29 and DC COMICS: BOMBSHELLS ANNUAL #1!
Read more
Other Formats: Paperback
Sign up and save an extra 10% on this book 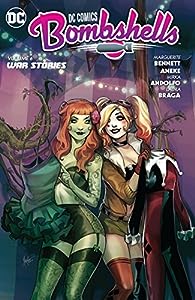 DC Comics: Bombshells (2015-2017) Vol. 6: War Stories
by Marguerite Bennett (Author) and 7 more
4.7 out of 5 stars (121)
$9.99
The fan-favorite series reaches its smashing conclusion, as the reimagined DC Comics heroines battle for their lives in an alternate-history World War II!

Supergirl has finally found some peace, living in Harley Quinn’s Circus in Leningrad alongside her fellow Bombshells and her clones, Power Girl and Superman. But the war is about to arrive right at her door.

Killer Frost is marching an army of Nazis and mythical monsters to Leningrad to claim another of the Circus’ residents—Raven, daughter of a demon and the key to unlocking a mystical power that will turn the tide of the war forever.

As Zatanna rushes to rescue Raven, and the Bombshells of Harley’s Circus unite for the fight of their lives, the true mastermind who has been manipulating Dr. Hugo Strange and Killer Frost will be revealed...and the world will never be the same!

Writer Marguerite Bennett (BATGIRL) and artists including Aneke (DAMSELS), Mirka Andolfo (WONDER WOMAN) and Laura Braga (WITCHBLADE) bring the series based on the popular DC Collectibles statue line to a close...and set the stage for the new series BOMBSHELLS UNITED!
Collects DC COMICS: BOMBSHELLS #25 and #30-33.
Read more
Other Formats: Paperback
Sign up and save an extra 10% on this book 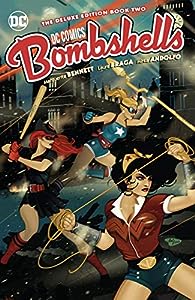 DC Bombshells: The Deluxe Edition Book Two (DC Comics: Bombshells (2015-2017))
by Marguerite Bennett (Author) and 2 more
4.8 out of 5 stars (65)
$16.19
In Gotham City, copycat Batgirls protect the homefront. In Greece, Wonder Woman faces a battalion of the undead. In London, Stargirl and Supergirl learn a dangerous family secret. And in Berlin, Zatanna attempts to thwart the evil magic that’s been released into the world. The paths of these super-heroines and more will converge as they face their greatest challenge yet. Collects DC COMICS: BOMBSHELLS #7-12!
Read more
Other Formats: Hardcover
Sign up and save an extra 10% on this book

Marguerite Bennett
Discover more books by the author, see similar authors, read author blogs, and more here
Back to top
Get to Know Us
Make Money with Us
Amazon Payment Products
Let Us Help You
EnglishChoose a language for shopping. United StatesChoose a country/region for shopping.
© 1996-2022, Amazon.com, Inc. or its affiliates