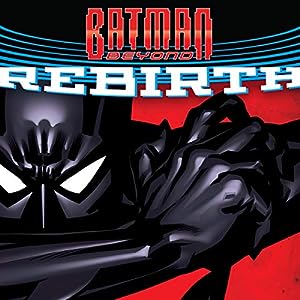 Batman Beyond (2016-) (8 book series) Kindle Edition
Batman Beyond (2016-) (8 book series)
Kindle Edition
by Dan Jurgens (Author) , Bernard Chang (Author) , Ryan Sook (Illustrator) and 2 more
5.0 out of 5 stars (1)
Six months have passed since the events of BATMAN BEYOND #16. While areas of destruction remain in the outside world, Gotham City has made great strides toward reclaiming its bright future. But new threats arise and old adversaries may be coming back. And the question still remains: whatever happened to Bruce Wayne?
Read more

As the future Gotham City recovers from global catastrophe, a familiar face is ready to wear the cowl of the Batman once again. Terry McGinnis has returned to defend his city as Batman, and his family and friends couldn’t be happier.

But another resurrection threatens to destroy all Terry holds dear. Rumors are spreading like wildfire that the original Joker lives-and the brutal crime lord called Terminal and his sadistic gang of Jokerz are waging war in the streets to prepare for the Clown Prince’s second coming.

Just days after becoming Batman again, Terry must take up the fight against the greatest foe he’s ever faced. When the dust clears, will the joke be on him? Collects BATMAN BEYOND: REBIRTH #1 and BATMAN BEYOND #1-5 in this great new jumping-on-point graphic novel!
Read more
Other Formats: Paperback
Batman Beyond (2016-) Vol. 2: Rise of the Demon
by Dan Jurgens (Author and 2 more
4.7 out of 5 stars (108)
$9.99
The Batman of the future is back. Emerging from the rubble of the cataclysm that nearly destroyed the Earth, Terry McGinnis has returned to Gotham City and reclaimed the mantle of the Bat. He’s fended off some of his deadliest foes to do it.

But he’s about to face an unexpected enemy—an opponent more patient, and more powerful, than any he’s ever known.

When the League of Assassins launches an all-out assault on Gotham, Terry must travel to Tibet in his experimental Batsuit. There, he’ll stop at nothing to rescue his captured mentor Bruce Wayne and take the fight to their leader—Ra’s al Ghul himself.

But when he finally gets his audience with the Demon’s Head, he’s in for the shock of a lifetime.

Can Terry defeat this shadowy figure and free Bruce Wayne from his nemesis? Or will this all-out war—and the twisted technology of his biomechanical Batsuit—drive him into a darkness he can never escape?

Discover the answer in BATMAN BEYOND VOL. 2: RISE OF THE DEMON, from the creative team of Dan Jurgens and Bernard Chang. It’s BATMAN BEYOND and Ra’s al Ghul as you’ve never seen them before! Collects BATMAN BEYOND #6-12!
Read more
Other Formats: Paperback 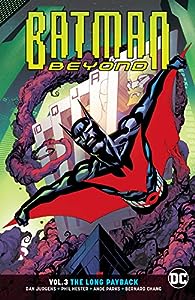 An entire legion of the deadliest enemies this brave young Batman has ever faced awaits the returning hero, determined to destroy him before he can ever take to the Gotham skies again. Street to street, corner to corner, building to building: Terry will be forced to wage war for every foot of ground in order to reclaim his city and his legacy.

His incredible new Batsuit can’t save him. His mentor, Bruce Wayne, can’t protect him. His allies have no chance to assist him.This is a one-man war for the soul of a city. And there can be only one winner…

The fight of Terry McGinnis’s life begins — and ends? — in Batman Beyond Vol. 3: The Long Payback, from the creative team of Dan Jurgens and Bernard Chang. It’s a non-stop action tour-deforce for one of the most beloved heroes in the DC Multiverse! Collecting Batman Beyond #13-19.
Read more
Other Formats: Paperback
Sign up and save an extra 10% on this book 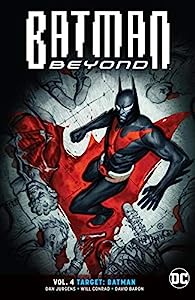 Author Dan Jurgens (The Death of Superman) and artist Phil Hester continue the journey of Terry McGinnis as he keeps Gotham on the right track in Batman BeyondVol. 4. After the events of "The Long Payback" we find Batman with his mysterious new partner...but can this new partner be trusted? You never know when it comes to the corrupt city of Gotham. Follow Terry as he dives deeper into the secrets of the city and the true idenity of his new partner.

Terry McGinnis' battle to keep Gotham safe continues in Batman Beyond Vol. 4! Collects Batman Beyond #20-24.
Read more
Other Formats: Paperback
Sign up and save an extra 10% on this book 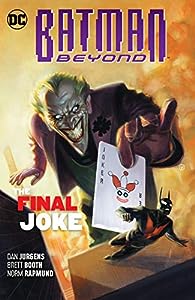 Batman Beyond (2016-) Vol. 5: The Final Joke
by Dan Jurgens (Author and 5 more
4.6 out of 5 stars (86)
$9.99
The dedication of a new building commemorating a special Wayne family event brings out all of Neo-Gotham’s familiar faces, including one who was not on the guest list. The Joker makes his return to Neo-Gotham, and no one is safe! Will he strike at Batman, Robin, Commissioner Barbara Gordon or the original Caped Crusader, Bruce Wayne? Decades after his last fight with the Dark Knight, the Clown Prince of Crime returns home to take his city back once and for all. Collects issues #25-30 and behind-the-scenes content!
Read more
Other Formats: Paperback
Sign up and save an extra 10% on this book 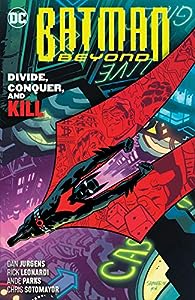 Batman Beyond (2016-) Vol. 6: Divide, Conquer, and Kill
by Dan Jurgens (Author , Rick Leonardi (Artist
4.6 out of 5 stars (66)
$9.99
A mysterious new villain known as the Splitt is preying on Neo-Gotham. Only Batman is capable of stopping him, but Terry McGinnis isn't getting help from Bruce Wayne, who is too busy lavishing cash all over the city to support Terry. Will even the combined forces of Batman and the Flash be enough to stop Splitt-and the mysterious False Face? Collects issues #31-36.
Read more
Other Formats: Paperback
Sign up and save an extra 10% on this book 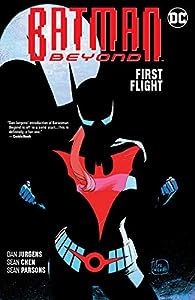 Batman Beyond (2016-) Vol. 7: First Flight
by Dan Jurgens (Author and 3 more
4.6 out of 5 stars (83)
$9.99
Who is Batwoman Beyond? With the Caped Crusader missing and Neo-Gotham facing the threat of one of the deadliest villains it's ever known, a new hero is needed! Bruce Wayne will turn to friends both old and new in order to keep his city safe, but that won't be enough. Fortunately, a new and mysterious protector will arrive on the scene, taking flight to save the city! But the new Batwoman better be ready-the villainous Blight is back, and he's bringing the fight to her! Collects Batman Beyond #37-42.
Read more
Other Formats: Paperback
Sign up and save an extra 10% on this book 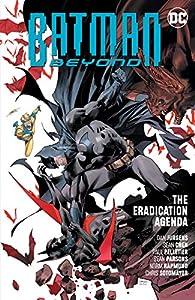 Batman Beyond (2016-) Vol. 8: The Eradication Agenda
by Dan Jurgens (Author and 4 more
4.7 out of 5 stars (47)
$9.99
In the final volume of Batman Beyond, Batman and Batman Beyond meet at least, with Booster Gold caught in the middle! But first, Terry McGinnis forges an uneasy alliance with Damian Wayne in order to stop Mr. Zero and his radical faction from turning Gotham City into an ice-covered hellscape. To set things right, Batman, Damian, and Batwoman Beyond must declare war on the League of Assassins! And one more thing: Inque returns, posing as Batman and wreaking havoc in Gotham City! Collects Batman Beyond #43-50.
Read more
Other Formats: Paperback
Sign up and save an extra 10% on this book

John A. Rocco
5.0 out of 5 stars Up
Reviewed in the United States on January 13, 2019
Inch
Read more
Helpful
Report abuse
See all reviews
More About the Author

Dan Jurgens
Biography
Dan Jurgens (born June 27, 1959 in Ortonville, Minnesota) is an American comic book writer and artist. He is known for creating the superhero Booster Gold, and for his lengthy runs on the Superman titles The Adventures of Superman and Superman (vol. 2), particularly during "The Death of Superman" storyline.
Bio from Wikipedia, the free encyclopedia.
Read more
Back to top
Get to Know Us
Make Money with Us
Amazon Payment Products
Let Us Help You
EnglishChoose a language for shopping. United StatesChoose a country/region for shopping.
© 1996-2022, Amazon.com, Inc. or its affiliates