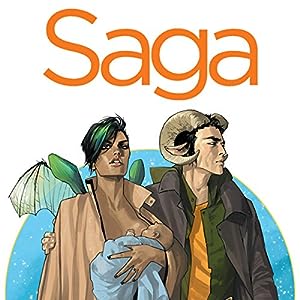 From New York Times bestselling writer BRIAN K.VAUGHAN (Y: THE LAST MAN, EX MACHINA) and critically acclaimed artist FIONA STAPLES (MYSTERY SOCIETY, NORTH 40), SAGA is the sweeping tale of one young family fighting to find their place in the worlds. When two soldiers from opposite sides of a never-ending galactic war fall in love, they risk everything to bring a fragile new life into a dangerous old universe. Fantasy and science fiction are wed like never before in a sexy, subversive drama for adults. This specially priced volume collects the first arc of the smash hit series The Onion A.V. Club calls "the emotional epic Hollywood wishes it could make."
Read more
Other Formats: Hardcover , Paperback
Saga Vol. 2
by Brian K. Vaughan (Author , Fiona Staples (Artist
4.8 out of 5 stars (1,514)
$5.99
Collecting the epic second storyline of the smash hit series Entertainment Weekly called "the kind of comic you get when truly talented superstar creators are given the freedom to produce their dream comic." Thanks to her star-crossed parents Marko and Alana, newborn baby Hazel has already survived lethal assassins, rampaging armies, and alien monstrosities, but in the cold vastness of outer space, the little girl encounters her family's greatest challenge yet: the grandparents.

The Eisner, Harvey, and Hugo Award-winning phenomenon continues, as new parents Marko and Alana travel to an alien world to visit their hero, while the family's pursuers finally close in on their targets.
Read more
Other Formats: Library Binding , Paperback 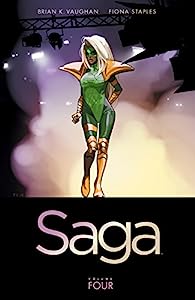 Collects SAGA #19-24.
Read more
Other Formats: Library Binding , Paperback
Sign up and save an extra 10% on this book 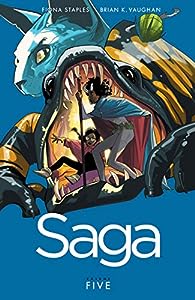 Saga Vol. 5
by Brian K. Vaughan (Author , Fiona Staples (Artist
4.9 out of 5 stars (1,077)
$5.99
While Gwendolyn and Lying Cat risk everything to find a cure for The Will, Marko makes an uneasy alliance with Prince Robot IV to find their missing children, who are trapped on a strange world with terrifying new enemies.

Collects SAGA #25-30.
Read more
Other Formats: Library Binding , Paperback
Sign up and save an extra 10% on this book 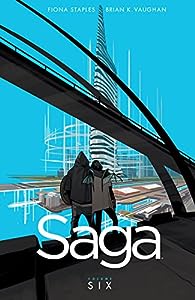 Saga Vol. 6
by Brian K. Vaughan (Author , Fiona Staples (Artist
4.9 out of 5 stars (1,053)
$5.99
After a dramatic time jump, the three-time Eisner Award winner for Best Continuing Series continues to evolve, as Hazel begins the most exciting adventure of her life: kindergarten. Meanwhile, her starcrossed family learns hard lessons of their own.

Collects SAGA #31-36
Read more
Other Formats: Library Binding , Paperback
Sign up and save an extra 10% on this book 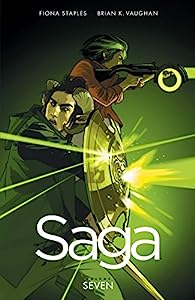 Saga Vol. 7
by Brian K. Vaughan (Author , Fiona Staples (Artist
4.9 out of 5 stars (1,050)
$5.99
From the worldwide bestselling team of FIONA STAPLES and BRIAN K. VAUGHAN, “The War for Phang” is an epic, self-contained SAGA event! Finally reunited with her ever-expanding family, Hazel travels to a war-torn comet that Wreath and Landfall have been battling over for ages. New friendships are forged and others are lost forever in this action-packed volume about families, combat, and the refugee experience.
Read more
Other Formats: Paperback
Sign up and save an extra 10% on this book 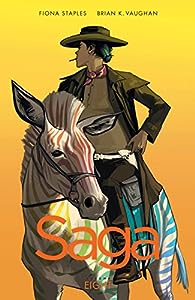 Saga Vol. 8
by Brian K. Vaughan (Author and 2 more
4.9 out of 5 stars (1,120)
$5.99
After the traumatic events of the War for Phang, Hazel, her parents, and their surviving companions embark on a life-changing adventure at the westernmost edge of the universe. Collects SAGA #43-48
Read more
Other Formats: Library Binding , Paperback
Sign up and save an extra 10% on this book 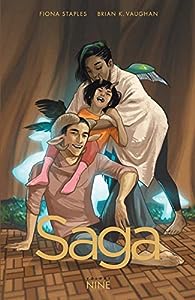 Saga Vol. 9
by Brian K. Vaughan (Author and 2 more
4.9 out of 5 stars (1,404)
$5.99
Get ready for the most shocking, most impactful SAGA storyline yet, an action-packed adventure about fake news and genuine terror. Collects SAGA #49-54
Read more
Other Formats: Hardcover , Paperback
Sign up and save an extra 10% on this book

christina
5.0 out of 5 stars You won't regret it
Reviewed in the United States on April 13, 2019
I love this comic. As a person just entering the world of comics this was a great series. Great story and illustration
Read more
3 people found this helpful
Helpful
Report abuse

a.l.
5.0 out of 5 stars Brian Vaughan at his absolute best.
Reviewed in the United States on May 3, 2016
superlative work. thoughtful, mature, sometimes hilarious and sometimes haunting, with incredible art and character design and a story that manages to be intimate and epic, both at once. Brian Vaughan at his absolute best.
Read more
6 people found this helpful
Helpful
Report abuse
See all reviews
More About the Author 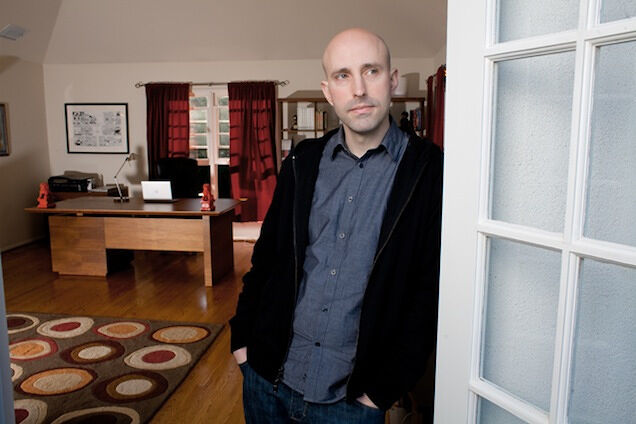 Brian K. Vaughan
Biography
Brian K. Vaughan is the Eisner Award-winning writer of Y: THE LAST MAN, EX MACHINA, RUNAWAYS, and PRIDE OF BAGHDAD. His newest work, with artist/co-creator Fiona Staples, is SAGA, an ongoing sci-fi/fantasy series from Image Comics that The Onion's A.V. Club called, "the emotional epic Hollywood wishes it could make." Vaughan lives in Los Angeles, where he works as a writer and producer on various film and tv projects, including three seasons on the hit series LOST.
Read more
Back to top
Get to Know Us
Make Money with Us
Amazon Payment Products
Let Us Help You
EnglishChoose a language for shopping. United StatesChoose a country/region for shopping.
© 1996-2022, Amazon.com, Inc. or its affiliates