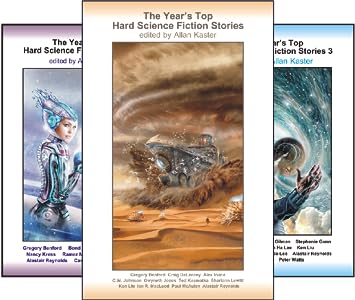 2
The Year's Top Hard Science Fiction Stories 2
by Allan Kaster (Author) and 9 more
4.1 out of 5 stars (9)
An unabridged collection spotlighting the “best of the best” hard science fiction stories published in 2017 by current and emerging masters of the genre, edited by Allan Kaster. In “Shadows of Eternity,” by Gregory Benford, a student investigates enigmatic SETI recordings from probes sent to nearby stars despite her teachers’ admonishments to stick to the curriculum. An alien robot offers to help save Earth as war and pollution ravage the last of the survivors on the planet in “The Chatter of Monkeys,” by Bond Elam. In “Acadie,” by Dave Hutchinson, the first humans still, even after five hundred years, hunt across the stars for their augmented children who have left Earth in search of paradise. The crew of an exploratory starship finds an icy moon that might harbor life in “Canoe,” by Nancy Kress. In “The Use of Things,” by Ramez Naam, an astronaut struggles to survive after being jolted free from an asteroid while on a solitary prospecting mission. A problem with the local birds threatens the rebuilding of Bikini Island as sea-levels rise due to global warming in “The Proving Ground,” by Alec Nevala-Lee. In “Holdfast,” by Alastair Reynolds, a genmod human soldier faces off with an alien warrior in the inhospitable terrain of a superjovian planet. A Russian astronaut, gathering debris in near-Earth space, must make tough moral choices when asked to carry out a special mission in “Vanguard 2.0,” by Carter Scholz. And finally, after a terrorist attack, a technically dead fish farmer gets a new body and second chance at life as an experimental super soldier, in “ZeroS,” by Peter Watts.
Read more

3
The Year's Top Hard Science Fiction Stories 3
by Allan Kaster (Author) and 9 more
4.2 out of 5 stars (6)
An unabridged collection spotlighting the “best of the best” hard science fiction stories published in 2018 by current and emerging masters of the genre, edited by Allan Kaster. In “3-adica,” by Greg Egan, sentient characters in an online multiplayer game hack the operating systems of their host machines to escape to a refuge that’s only rumored to exist. Struggling colonists, on a world subject to periodic bursts of radiation from its primary’s UV-emitting companion, go on an expedition to recover a critical package from Earth in “Umbernight,” by Carolyn Ives Gilman. In “Icefall,” by Stephanie Gunn, the Mountain on the planet, Icefall, holds the mystery to a lost colony and is an irresistible, fatal allure to the climbers of the universe; but no one ever returns from the Mountain. A mother seeks revenge on the doctor that changed her neuro-atypical son’s personality with a deep brain stimulation implant in “The Woman Who Destroyed Us,” by S.L. Huang. In “Entropy War,” by Yoon Ha Lee, a conquering alien race at the height of their powers, retreats into an arkworld to win the ultimate war in the only way they can. An AI piloting an island-ship, that used to be the Earth, struggles to make sense of the universe as the last stars are dying out in “Cosmic Spring,” by Ken Liu. In “Nothing Ever Happens on Oberon,” by Paul McAuley, set in the author’s Quiet War universe, a supervisor of a mining operation on the moon, Oberon, investigates the crash-landing of an ancient escape pod. In depression-era Alaska, a desperate bush pilot reluctantly accepts an illegal charter from a pair of scientists investigating a legendary mirage in Glacier National Park in “The Spires,” by Alec Nevala-Lee. In “Providence,” by Alastair Reynolds, the crew of a crippled starship, unable to complete its mission, decides to salvage its expedition by providing future exploratory ships with data they did not have. A disillusioned crèche manager leaves Luna to work on an asteroid-based crèche and then must decide whether or not to return to Luna in “Intervention,” by Kelly Robson. And finally, an entity that controls the solar system wants aid against another entity from a reconstructed human it just created, in “Kindred,” by Peter Watts.
Read more

4
The Year's Top Hard Science Fiction Stories 4
by Allan Kaster (Author) and 9 more
4.6 out of 5 stars (5)
An unabridged collection spotlighting the best hard science fiction stories published in 2019 by current and emerging masters of the genre, edited by Allan Kaster. A coastal restoration researcher can help the police solve a murder but is conflicted over the unjust nature of the criminal justice system in “Soft Edges,” by Elizabeth Bear. In “By the Warmth of Their Calculus,” by Tobias S. Buckell, the captain of a dustship musters her crew to escape from a trap set by Hunter-Killers in a game of cat and mouse amid the rings of a giant planet. An arachnipede becomes wary of potential mates after she sees a male eat her mother . . . but she’s lonely in “A Mate Not a Meal,” by Sarina Dorie. In “The Slipway,” by Greg Egan, astronomers are hard-pressed to explain what appears to be a new cluster of stars that’s growing by the hour. Abandoned at a lunar base after losing radio contact with Earth, a newlywed traverses the moon in a buggy with her newborn toward a skyhook on the farside in “This is Not the Way Home,” also by Greg Egan. In “Cloud-Born” by Gregory Feeley, children born on a ship from Earth become anxious as they begin to transition to their new lives as colonists of Neptune. An astrobiology postdoc is called at the last minute to remotely navigate a robot searching for hydrogen-based life on Titan in “On the Shores of Ligeia,” by Carolyn Ives Gilman. In “Ring Wave,” by Tom Jolly, an engineer in a life pod is desperate to join a colony in space after an asteroid destroys Earth. A deep-sea mining company’s operation is threatened by a crustacean scientist in “The Little Shepherdess,” by Gwyneth Jones. In “Sacrificial Iron,” by Ted Kosmatka, a decades long mission to another star is threatened when the two men keeping watch over a frozen crew turn on each other. A teenager seeks to maintain her “Captain” status among her non-traditional lunar family by leading her siblings on a dangerous trek to Neil Armstrong’s first footprint on the moon in “The Menace from Farside,” by Ian McDonald. In “The Ocean Between the Leaves,” by Ray Nayler, the mind of a dying gardener is transferred to another body for three days of closure in a state-run experiment. A robot strives to maintain its energy reserves as it crosses thousands of kilometers underwater to find its way home in “At the Fall,” by Alec Nevala-Lee. In “Winter Wheat,” by Gord Sellar, a Canadian farmer and his son are at odds on how to cope with a powerful agribusiness promoting its genetically modified wheat. And finally, a resentful submarine pilot is ordered to an undersea research facility to assist with the mining survey of a formerly protected seabed in “Cyclopterus,” by Peter Watts.
Read more

Allan Kaster
Back to top
Get to Know Us
Make Money with Us
Amazon Payment Products
Let Us Help You
EnglishChoose a language for shopping. United StatesChoose a country/region for shopping.