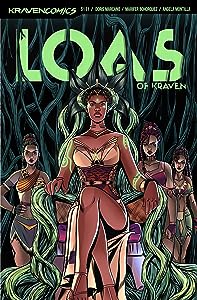 Loas of Kraven (1 book series) Kindle Edition
Loas of Kraven (1 book series)
Kindle Edition
by Fernando Velez (Author) , Marifer Bohorquez (Illustrator) , Angela Montilla (Illustrator) and 2 more
In 1685, England’s King James II has inherited the throne of his brother Charles II, taking complete control over the kingdoms of England and Scotland. This includes the lucrative slave trade company, The Royal African Company, which supplies slaves to the Americas, thirteen colonies, and the Caribbeans. As demand grows for slaves, so does the conquest for much of northwest Africa. However, the King’s daughter Mary lives in the Dutch Republic with her husband, King William of Orange. She disagrees with her father’s practices and beliefs. The couple is protestant and secretly wants to abolish slavery and the slave trade.

James II sent his colonist explorers to venture deep into the jungles of what is now known as the Tongo area in west Africa. But unfortunately for them, the dense jungle and the distance made it difficult for the King to reach this land.

After months of exploring, they finally see tracks that lead to a civilization like no other they have conquered. They discover a powerful race called Loas; so powerful and advanced that it threatens the power of the caucasian men of England.

The Loas have been here since the day nature was born. Through time and space, this race has shaped the world and yet managed to stay unnoticed. The leader of this kingdom is Ayira, the main Loa. Together with the two other Loas, Naya and Keita, they hold the highest and most respected positions in their society. In this kingdom, women are the most valuable members of society. Therefore, they have the highest elevated positions in government and the military. The men see them as goddesses, as they are the ones that give life to their race. Therefore, men will give their lives to protect their women.

Full of secrets and mysteries, Ayira must protect the kingdom from the European caucasian colonists who want to destroy them, take away their freedom, and turn them into slaves to trade with the American colonies.
Read more
You've subscribed to Loas of Kraven! We will preorder your items within 24 hours of when they become available. When new books are released, we'll charge your default payment method for the lowest price available during the pre-order period.
Update your device or payment method, cancel individual pre-orders or your subscription at
Your Memberships & Subscriptions
There was an error. We were unable to process your subscription due to an error. Please refresh and try again.
All titles below are free to borrow with a Kindle Unlimited subscription.
Books in this series (1 book)
1
Loas of Kraven Episode One
by Fernando Velez (Author) and 4 more

In this first episode, we meet the Loas and their kingdom. Ayira is a strong, intelligent, reserved, and hard-to-break woman with unique abilities whose existence is a mystery. Naya is a scientist unable to practice science, leading her to become an alcoholic. Keita is in charge of the military and the security of the kingdom. Oni is Ayira's last child.

Ayira has been monitoring the activities of the colonists in the northern territories for some time now. Worried that they are getting too close to the kingdom, she is preparing to protect it. On the other hand, Oni has never interacted with another human besides her race, and she is curious about what could happen if the colonists and her race connected. Naya believes that it is time for their powerful kingdom to expand; if the colonists do it, they should as well. Ayira sees things differently because she has seen what humanity can do; for this, she vows to keep her race unknown to the rest of earth's civilizations.

In this first episode, we see the first encounter with the English colonists, and we get a preview of each of the principal characters. We also give you some details about the past of the Loas. Unfortunately, I would love to provide you with more information and facts, but if I say too much, I may reveal too much.