Gary Clifton, forty years a cop, including a twenty-five-year career as an ATF Agent, has spent a lifetime squarely in a free front row seat to the damnedest show on Earth. Having been shot at, shot, stabbed, sued, lied to and about, and frequently misunderstood, there is no violent crime, vicious situation, nor clever criminal subterfuge he hasn’t seen. Of the many tales he’s written, each is based in some actual crime he’s handled, with names changed only to protect the guilty. He has a master’s in psychology, an invaluable tool in trying to unravel the violence human beings can inflict upon each other.

Clifton published a novel, Burn Sugar Burn in national paperback in 1987. Since, he’s found more fertile ground in short fiction pieces. The Toronto based magazine, Bewildering Stories, has published more than fifty of Clifton’s stories. He has published upwards of sixty more in various venues, including Broadkill Review, The Simone Press, Beat to a Pulp, Yellow Mama, Rusty Nail, Crack the Spine, and numerous others. 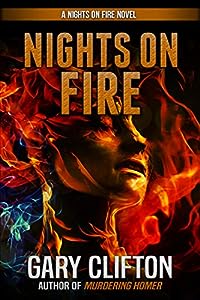 1
Nights on Fire (The Nights on Fire Novels Book 1)
by Gary Clifton (Author)
In the mid 1980s, Kobock, a hard-drinking ATF agent, constantly in the doghouse of hostile, incompetent management and an indifferent bureaucracy, is assigned a dead end arson homicide wherein a young female victim is tired to a bed and burned alive.

What appears to be another venture into frustration quickly becomes a sordid, violent trail of sin and degeneracy which wends its way though the Dallas underbelly of crime.

In the end, he stumbles into a conclusion so bizarre and twisted that even his cynical mind cannot fully understand.

(This is a recently revised version of Burn Sugar Burn, originally published by PaperJacks in 1988.)
Read more 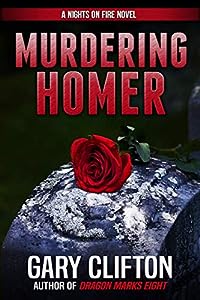 2
Murdering Homer: A Nights on Fire Novel (The Nights on Fire Novels Book 2)
by Gary Clifton (Author)
4.6 out of 5 stars (3)
Kobok, a rough-edged and always on the edge ATF agent, is a rounder, a brawler, sometimes a drunk, and always in conflict with an inept government management. His rookie partner has matured into a streetwise veteran, and the always explosive Dallas Homicide Detective Bull Hooper remains the toughest guy on the block.

Homer Wayne DuPree, self-made multimillionaire waste disposal magnate, is stunned when his long-time wife dies. He marries a prostitute. She and her lover decide to murder the old man for his fortune. They learn that murder is an inexact science and some folks take more killing than others. Kobok, convinced he’s seen it all, soon realizes that identifying the players in the business of assassination is a whole new world.
Read more 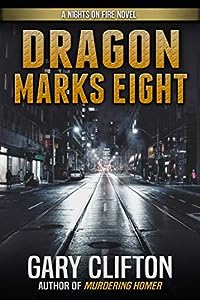 3
Dragon Marks Eight: A Nights on Fire Novel (The Nights on Fire Novels Book 3)
by Gary Clifton (Author)
5.0 out of 5 stars (5)
In the mid 1980s, Kobok, a hard drinking, cynical, veteran ATF Agent, is caught between an inept supervisor and a system that demands results to avoid transfer to Butte, Montana, or a duty station where mail comes monthly by tramp steamer. Under the gun to produce a major case, he’s summoned to an arson homicide in an affluent Dallas neighborhood where the only survivor is the ex-stripper wife of the victim, the owner of a brassiere factory.

The ghastly crime scene discloses two pre-teen sons also dead in the debris. Kobok discovers a child’s journal depicting what appears to be a game involving mythical characters and a twelve-sided dice. Thinking it might shed light on lives of a dysfunctional family, he tucks the journal away, but it soon drifts out of mind.

With a rookie agent partner, weeks out of the academy, and Bull Hooper, a hard-nosed, kick-ass Dallas Homicide Detective, he wends his way along the seamy underside of Dallas, through strip clubs, an outlaw biker gang war, a variety of back alley characters, and sudden, deadly violence. In the end, he realizes with sobering clarity that what seems to be, often isn’t, and the journal scribbling of a child exposed to horrors beyond his comprehension, could be more insightful than any reasoning mind could possibly understand.
Read more