Crisis Evolution and millions of other books are available for Amazon Kindle. Learn more
Share <Embed> 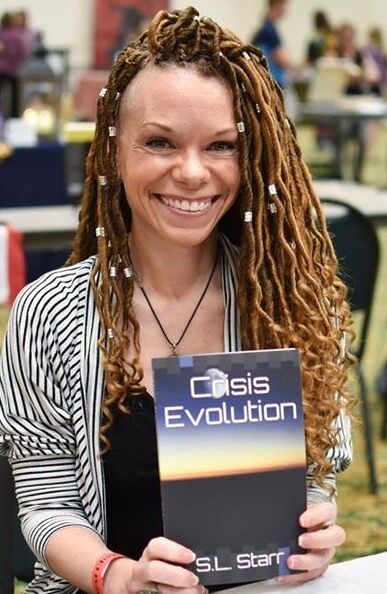 by S.L. Starr (Author)
5.0 out of 5 stars 7 ratings
See all formats and editions
Sorry, there was a problem loading this page. Try again.

The year is 2130. A young man named Alex wakes up in the middle of a field, and he has no recollection of how he got there. After saving his life from an imminent threat, a trio of ragtag vigilantes with superpowers inform him that humanity has been at war with an alien race for over 30 years, and 75% of the human population has either been wiped out or enslaved. The remaining humans are now living in hidden underground corridors as they continue to fight this dire threat. Alex will eventually learn that he holds more power than his superhero counterparts and is now on a journey to discover who he really is, why he is more powerful than everyone else, and if there are more humans like him. Can he and his new, powerful allies save the human race from extinction?
Read more
Previous page
Next page

Start reading Crisis Evolution on your Kindle in under a minute.

S.L. Starr was born in Chattanooga, TN, in 1978. Writing has always been a passion of hers, and no matter how much life got in the way, it was something she eventually picked up again. The idea for Crisis Evolution came to her back in 2004, but at that time, she had little time to spend writing, so after only finishing a few pages, she had to set it aside. Almost exactly ten years later, in August of 2014, she picked the book up again and began her journey renewed.

The newest venture with this book was on and off again, but with much soul searching, she finally came to understand that writing is and always has been her biggest passion.

&quot;There's nothing quite like putting yourself inside the head of a character and actually getting to choose what happens to him. Writing fiction is a lot like acting, except you get to play everyone!&quot; - S.L. Starr

5.0 out of 5 stars
5 out of 5
7 global ratings
How are ratings calculated?
To calculate the overall star rating and percentage breakdown by star, we don’t use a simple average. Instead, our system considers things like how recent a review is and if the reviewer bought the item on Amazon. It also analyzes reviews to verify trustworthiness.
Top reviews

Customer
5.0 out of 5 stars Can't wait for the next one...
Reviewed in the United States on May 1, 2019
Verified Purchase
Bought this book to read while waiting for my physical therapy sessions. Big mistake! I didn’t want to put it down every time it was my turn… After two days of frustrating interruptions, finally ended up reading it until its end last night.

Can’t wait to read the next one!
Read more
2 people found this helpful
Helpful
Report abuse

Karen
5.0 out of 5 stars Awesome book from a new author
Reviewed in the United States on June 7, 2019
Verified Purchase
I don't usually like the 'dystopian future' scenario for my own reading enjoyment. However this book is an exception to the rule. I was drawn in from the very beginning. It's a fast paced action adventure with a lot going on within the pages. I thoroughly enjoyed this book and I am eagerly awaiting the next book.
Read more
One person found this helpful
Helpful
Report abuse

dave
5.0 out of 5 stars You won’t want to put it down.
Reviewed in the United States on June 13, 2019
Verified Purchase
Just when I think I have this figured out, I don’t. The author keeps you guessing with her unexpected twists and turns. I read this faster than any other book since Sydney Sheldon’s books. Loved it!
Read more
One person found this helpful
Helpful
Report abuse

J Millsaps
5.0 out of 5 stars No matter what genre your into, if you like action, mystery and heroes you will love this story!
Reviewed in the United States on June 10, 2019
Verified Purchase
It was a great story. I don't want to give too much away. What I liked least probably that book one is over. I'm ready to continue the story.
Read more
One person found this helpful
Helpful
Report abuse

Fanatic
5.0 out of 5 stars Absolute Thriller!
Reviewed in the United States on May 27, 2019
Could not put this book down....absolutely gripping. Highly recommend!
Read more
One person found this helpful
Helpful
Report abuse
See all reviews
Back to top
Get to Know Us
Make Money with Us
Amazon Payment Products
Let Us Help You
EnglishChoose a language for shopping. United StatesChoose a country/region for shopping.
© 1996-2021, Amazon.com, Inc. or its affiliates