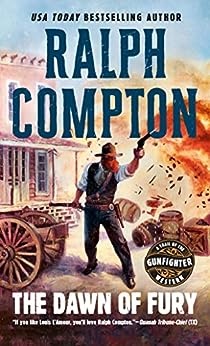 by Ralph Compton (Author) Format: Kindle Edition
Book 1 of 3: A Trail of the Gunfighter Western
See all formats and editions
Sorry, there was a problem loading this page. Try again.
A gunslinger gets bloody payback in this western from USA Today bestselling author Ralph Compton.

Praise for the novels of Ralph Compton

“Compton offers readers a chance to hit the trail and not even end up saddle sore.”—Publishers Weekly

Ralph Compton stood six-foot-eight without his boots. He worked as a musician, a radio announcer, a songwriter, and a newspaper columnist. His first novel, The Goodnight Trail, was a finalist for the Western Writers of America Medicine Pipe Bearer Award for best debut novel. He was also the author of the Sundown Rider series and the Border Empire series.

Joseph J. TruncaleTop Contributor: Boxing
TOP 100 REVIEWERVINE VOICE
5.0 out of 5 stars The first book in a great three western series that is a fantastic read. I loved it.
Reviewed in the United States on March 9, 2022
Verified Purchase
As someone who has been a voracious reader on topics from A to Z for more than 7 decades, my reading interests have always been wide and varied from the sciences, such as astronomy, cosmology, quantum physics, and biology, to the esoteric topics, Zen, Taoism, Tai Chi, Qigong, and various energy healing systems; and many detective stories and western novels. This is why when I saw this new gunfighter trilogy by Ralph Compton, I decided to send for all three soft cover books. This is the first 481-page pocketbook (The Dawn of Fury by Ralph Compton) in the series, and I just finished reading it, and I loved it.
Over the years I have read hundreds of western novels, many by Louis L’Amour and most of the Longarm series and this author is clearly up there with the best western writers I have read over the years. This is really an epoch novel and I love the way it is organized into the date of each area Nathan Stone travels on his road to vengeance.

This western tale in the prologue provides a historical perspective. It is the end of the civil war, where young Nathan Stone coming back from fighting for the south in the civil war is making his way back to his home in Virginia. What he does not know is that his father had been murdered and his mother and sister had been raped and brutalized by gang of seven murdering thugs, who had burned his house to destroy the evidence of their crime; however, an old black man named Malachi, who was now a free man but stayed on with the Stones, was a witness to the atrocious crimes and buried the family on the property.

When Nathan Stone came upon his home and saw it completely burned down Malachi advised him of what had occurred with details about the seven ruthless killers who killed his family. Before his father, Joshua died, he told Malachi to tell Nathan to hunt down and kill the murdering thugs no matter what it takes to do it.

This begins a long hard journey of Nathan Stone, who right off the bat sounds like the kind of gunfighter I liked right way. He has no hesitation to do what has to be done and he is clearly an intelligent young man with a purpose. I never give away too much information when reviewing any novel, but if you like reading an action packed, page turning western adventure you may want to check out this book, as well as the other two in this series.
Rating: 5 Stars. Joseph J. Truncale (Author: Pro-Systems Combatives, Vol. 1,2).
Read more
Helpful
Report abuse

Kindle Customer
5.0 out of 5 stars NATHAN STONE
Reviewed in the United States on April 24, 2018
Verified Purchase
VENGEANCE is the plot of this adventure. Sadly how people treat others because they can. Kidnappings of Nathan's wife Mary, by El Gato, how he allowed the gang members raped the pregnant mother. They tortured her because of her marriage to Nathan Stone..Pure Savagery..
We must not forget "Cotton Blossom" a blue tick hound a protector and friend for life..
Read more
2 people found this helpful
Helpful
Report abuse

Ray S
4.0 out of 5 stars Good read.
Reviewed in the United States on March 9, 2019
Verified Purchase
Ralph Compton's Trail Drive Series are the best western books I have read. The gunfighter series are entertaining but not like the trail drives. I love the description of frontier life and historical references to the time period.
Read more
Helpful
Report abuse

T. CHADWICK
2.0 out of 5 stars Misses The Mark
Reviewed in the United States on March 6, 2011
Verified Purchase
"The Dawn of Fury" should be retitled "Yawn of Fury".
Purchased this as an ebook after reading reviews. Most gave it high marks. After two hundred pages I gave up. Not what I thought it would be, a good old western. The book started out fine and then it went down hill. Just plain boring page after page. Have read other Ralph Compton books but by different authors that were much better and held my interest, not this one. Time to move on.
Read more
Helpful
Report abuse

BOBDOLE
5.0 out of 5 stars Great book love the revenge
Reviewed in the United States on August 23, 2016
Verified Purchase
Basically he's the wild wests Punisher. While I wished there was more on his gun slinger parts. It tells the whole story and adds some perspective to parts of life in the west you may not typically think about. While still keeping it firmly planted in the story of a man on the revenge trail.
Read more
One person found this helpful
Helpful
Report abuse

B Ardell Young
5.0 out of 5 stars A Good Read
Reviewed in the United States on May 6, 2000
Verified Purchase
Ralph Compton does a solid job of writing in this novel and brings Nathan Stone to life for the reader. The book will make you purchase the two remaining books of the trilogy.
The book is very interesting, carries you over much of the west and provides deep rich detail about St. Louis and New Orleans after the civil war.
Read more
Helpful
Report abuse

Adam
1.0 out of 5 stars Thesaurus, the bad, and the ugly!
Reviewed in the United States on September 27, 2005
Verified Purchase
This book reads like it was written by a high school dropout who posesses a very limited vocabulary. There is no character development at all. The story only moves along by the most convenient of happenings (finding two of the killers names in the newspaper, when neither of the characters were interested in the newspaper for the entire first quarter of the book! Suddenly, luckily there just happens to be the info they need on the day they are looking for it! Horrible.) I would like to buy this author a thesaurus so he wouldn't have to use the same words/phrases over and over again until I got bored and stopped reading for the day.

If you want bland "Saturday Afternoon Action Movie" story, dialog, and characters then this is your author, otherwords stick to the nonfiction of the real west, it is much more worthwhile and daring this trite piece of waste.
Read more
2 people found this helpful
Helpful
Report abuse

Kindle Customer
5.0 out of 5 stars I do like this author
Reviewed in the United States on September 24, 2014
Verified Purchase
I do like this author. the Dawn of Fury was the first book by him that I had read and I found that I was with him as he developed Nathan Stone's character and I even liked his dog Cotton Blossom who has his own personality.
Read more
2 people found this helpful
Helpful
Report abuse
See all reviews

Libby
5.0 out of 5 stars A "Must Read" for Lovers of Westerns
Reviewed in the United Kingdom on July 16, 2013
Verified Purchase
This is the most exciting and brilliantly written of western books. After reading all of Louis L'Amour's books I wondered who to read next and Ralph Compton was my answer - the whole Trail Series is fantastic. Dawn of Fury is the first of three books covering the life of Nathan Stone (2nd Killing Season & 3rd Autumn of the Gun) - this fictional character being linked in with real characters of 19th Century Frontier Days. It is wise to read them in the correct order because then there are further sequels. There is so much killing, but it gives an insight into the hardship of the days before there were laws and when most people had so little.
Read more
One person found this helpful
Report abuse