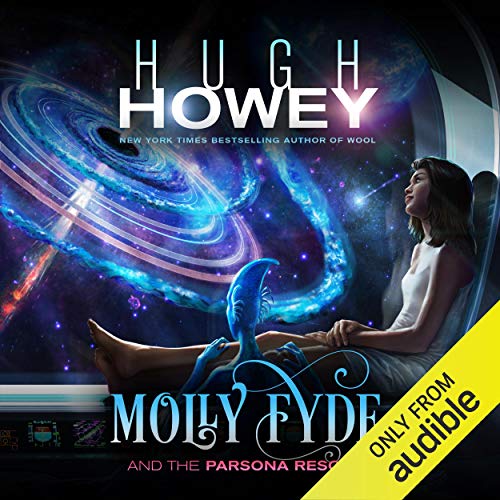 Molly Fyde and the Parsona Rescue: The Bern Saga, Book 1

List Price: $24.95
You Save: $3.00 (12%)
By completing your purchase, you agree to Audible’s Conditions Of Use
Sold and delivered by Audible, an Amazon company
Share

4.2 out of 5 stars
4.2 out of 5
553 global ratings
How are ratings calculated?
To calculate the overall star rating and percentage breakdown by star, we don’t use a simple average. Instead, our system considers things like how recent a review is and if the reviewer bought the item on Amazon. It also analyzes reviews to verify trustworthiness.
Top reviews

Amazon Customer
3.0 out of 5 stars Sci Fi is a favorite and much needed escape (helps me distract from haunting ...
Reviewed in the United States on April 19, 2016
Verified Purchase
I am a new fan of Hugh Howey's books. Sci Fi is a favorite and much needed escape (helps me distract from haunting thoughts during chemo treatment :~) ). The only reason I may not go for the full star rating is that I believe I was spoiled by starting with his Wool/Sand Omnibus series, devouring them like grapes. This set is a bit lighter weight and leans on the familiar a bit more, more of a young adult framework. This series features another decent female lead, yay, and she gets a decent boy for a companion. The Molly Fyde series is well done and imaginative. As I mentioned, it seems to lean more towards a young adult audience, much as Hunger Games books do. Which also doesn't mean they cannot be enjoyed by us old kids! It is a rollicking adventure through planets with some wild characteristics and cultures, much shifting of the "villians" with some satisfying political references hinted at. He takes the time to let the characters work through some thought processes and grow. Some pleasures: the manner in which he successfully frames different thinking and language patterns of various species while still writing in English. It does get a little Star-Wars-y with some of the creatures, but forgivable. Also appreciated is the time taken to explore the eternal question: why do so many alien creatures in literary and filmic lore persist in being portrayed as bipeds with faces and just a few body mods?
Read more
17 people found this helpful
Helpful
Report abuse

AiDee
4.0 out of 5 stars Exhausting!
Reviewed in the United States on October 5, 2020
Verified Purchase
This well written story deserves its 4 stars. Exhausting though, it is ‘a series of unfortunate events’ set in space. The hits just didn’t stop coming, and for this reason I found it exhausting to read yet strangely compelling, at times a true page turner

Molly Fyde plays an oddly subdued role in this story, more controlled by than in control of events despite her prodigy-level skill as a pilot. There is credit in giving her challenges to overcome where these skills don’t apply, and in this sense we have here a coming of age story

I’m intrigued enough, and hopeful that a substantially more ‘take charge’ Molly emerges in the next story. For this reason alone, I’m likely to try the next in the series
Read more
Helpful
Report abuse

Max
5.0 out of 5 stars Back to basics
Reviewed in the United States on August 13, 2012
Verified Purchase
Probably like many others, I discovered Hugh Howey with Wool. I found that series so amazing that I had to read his other works, so I went back to the beginning with Molly Fyde and the Parsona Rescue. I enjoyed that book tremendously: it's well-written, funny, fast-paced. The characters are all immediately appealing. The situations force you to keep on reading to know what the outcome will be. After only a few pages, you feel that the author has managed to create a coherent fictional world that has the potential for an ongoing series. You feel comfortable with the heroine, just like when you're reading one of your favourite comics. By the way, Molly and the universe she evolves in share similarities with the French comics series "Sillage" ("Wake" in the English translation).
Howey manages to create something new while using traditional ingredients: Molly is the underdog, the poor orphan girl (like Dickens's young characters, or, closer to us, Harry Potter). There's something of Gulliver's travels too, with the different customs, sizes and specificities of every race: the Glemots are very tall and heartlessly efficient, the Palans are messy and treacherous, the Drenards are exceptional pilots... Each encounter raises philosophical questions that can be a bore for Molly, but are actually quite deep and thought provoking (the place given to technology, what's art / beauty, how to decide what's important or not). She and Cole are like two futuristic Gullivers or Candides, yet they're not that naive and helpless, even if they're young. Each encounter adds another unexpected friend to this motley crew, which looks like Peter Pan's lost boys (Walter the Palan, Edison the Glemot, Anlyn the Drenard...)
There's constant movement in The Parsona Rescue: it's a way to keep the blood flowing and the interest up. Movement was key in Wool too, though in a cramped space, always up and down, while here it's from planet to planet aboard spaceships... Still, in both cases it always has something to do with escape. Conspiracy and lies are also at the core of both narratives, as the main characters fight against the system, through an investigation that reaches the level of a quest.
The cliffhanger ending leaves you with but one choice: ordering the second volume, which is just what I'm about to do.
Read more
17 people found this helpful
Helpful
Report abuse
See all reviews

Philip B. Hodgson
5.0 out of 5 stars Great saga
Reviewed in the United Kingdom on May 14, 2013
Verified Purchase
The comic name in the title made m wonder whether this book was written tongue in cheek, but it's a very involving book, with solid, believable characters in a believable galaxy. A good plot, which leaves enough loose ends to make you want to read the next book. Could have done with some proofreading by someone better acquainted with English grammar (drug as the past tense of drag?), but fortunately the errors are not too numerous.
Read more
2 people found this helpful
Report abuse

P. G. Russell
3.0 out of 5 stars A bit of juvenilia
Reviewed in the United Kingdom on August 21, 2013
Verified Purchase
I bought this as I had enjoyed Wool so much, but it is obviously a teen series - exciting enough I suppose, but not to be compared with the marvels of The Silo! I will not be going on to the others, but would recommend the series for those in the appropriate age group, as it does touch on quite serious issues of morality and loyalty.
Read more
3 people found this helpful
Report abuse

Sharon
5.0 out of 5 stars great story
Reviewed in the United Kingdom on February 23, 2014
Verified Purchase
This is a great story, lot's of action and interesting plot twists. Keeps you gripped up to the end and wanting to know what happens next. A good read for teenagers if your looking for something to get them into, but I enjoyed it as a bit of light reading.
Read more
One person found this helpful
Report abuse

Paulie 24
4.0 out of 5 stars Unexpectedly and pleasantly enjoyed this
Reviewed in the United Kingdom on October 4, 2015
Verified Purchase
Started this book on the back of reading Wool and wasn't sure what to expect. Whilst not the best written story I really enjoyed it and immediately bought the second in the series
Read more
Report abuse
See all reviews
Back to top
Get to Know Us
Make Money with Us
Amazon Payment Products
Let Us Help You
EnglishChoose a language for shopping. United StatesChoose a country/region for shopping.
© 1996-2021, Amazon.com, Inc. or its affiliates