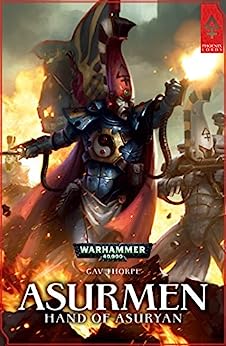 by Gav Thorpe (Author) Format: Kindle Edition
Book 1 of 2: Phoenix Lord
See all formats and editions
Sorry, there was a problem loading this page. Try again.

The Phoenix Lords are demigods of battle, warriors whose legends span the stars. They are embodiments of the warrior nature of the eldar, and each walks his own path. The first, and greatest, is Asurmen, the Hand of Asuryan. Since he led his people from destruction at the time of the Fall, he has guided his children, the Dire Avengers, in defending the remnants of the eldar as they plan their rise back to galactic dominance. A superlative warrior and peerless leader, Asurmen is one of the greatest hopes of the eldar race.

Read it because
For the first time, get a glimpse at the horrors of the Fall of the Eldar and find out what drove Asurmen to create the Dire Avengers and start a whole new way of waging war. You also get to see him ten thousand years later, still defending his people from the darkness, and look at what drives him to keep doing so.

4.5 out of 5 stars
4.5 out of 5
22 global ratings
How are ratings calculated?
To calculate the overall star rating and percentage breakdown by star, we don’t use a simple average. Instead, our system considers things like how recent a review is and if the reviewer bought the item on Amazon. It also analyzes reviews to verify trustworthiness.
Top reviews

CJ
5.0 out of 5 stars Great insight into the Great Fall
Reviewed in the United States on January 17, 2021
Verified Purchase
Fun story coupled with some history of the fall of the ancient Eldar empire. A must read for Aeldari fans.
Read more
One person found this helpful
Helpful
Report abuse

Daniel H
5.0 out of 5 stars Love it
Reviewed in the United States on November 24, 2019
Verified Purchase
As the title says I loved it and I can't wait to read the next book in the series. Need more Phoenix Lord's and there storys
Read more
One person found this helpful
Helpful
Report abuse

Verified Purcher
5.0 out of 5 stars Please Give Us More Stories Of The Phoenix Lords
Reviewed in the United States on July 28, 2019
Verified Purchase
The Eldar truly fascinate me. An in-depth look into how and why the Phoenix Lords were created is a wonderful edition to the few Eldar books I have already read. Thank you.
Read more
One person found this helpful
Helpful
Report abuse
See all reviews

Pete G
5.0 out of 5 stars Much better than I expected
Reviewed in the United Kingdom on January 7, 2016
Verified Purchase
I must confess to being surprised at how much I enjoyed Asurmen! Gav Thorpe has managed to do the impossible and make us care about and understand the feelings of an immortal un-killable super warrior. There's some nice flashbacks to the fall of the Eldar empire and a nice little story set in the 41st century overlapping it. Looking forward to a book about each of the Phoenix Lords. This felt like it was the beginning of a bigger story. Obviously its not Shakespeare, but thats not what I wanted when I picked up this book.
Read more
2 people found this helpful
Report abuse

F. Graham
4.0 out of 5 stars Good read
Reviewed in the United Kingdom on August 4, 2017
Verified Purchase
It's a good story but it would have been nice if it's longer. Story felt a little bit rushed.
Read more
Report abuse