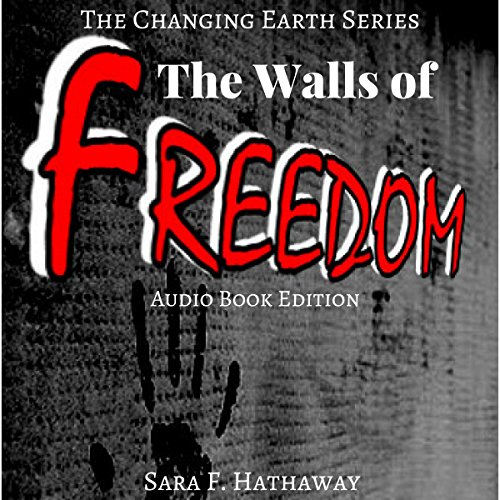 The Walls of Freedom

Sara F. Hathaway (Author, Narrator, Publisher)
4.7 out of 5 stars 7 ratings
See all formats and editions
Sorry, there was a problem loading this page. Try again.

"I just hope I...have the spirit to go on fighting. Have the power to take on forces that are so much bigger than me." On the run, Erika, her husband, Vince, and their children flee the government forces in search of a new life.

The Great Quake 10 years ago left the United States devastated. FEMA camps sprouted up in Regional Districts to control the chaos and separate the landowners from the refugees. Erika and her family spent nine years as refugees in the camp before they found out that Vince's parents were still alive and they were searching for them. The Las Vegas FEMA Director, realizing his mistake, attempted to have the family eliminated to save his career. Vince and Erika take their family's future into their own hands and flee the camp in a cross-country action-packed adventure. Will they find Vince's parents? Will society accept them again? Can they accept this new government system?

Your audiobook is waiting!
Learn more about membership
List Price: $19.95
You Save: $2.00 (10%)
By completing your purchase, you agree to Audible’s Conditions Of Use
Sold and delivered by Audible, an Amazon company

Mama Who
4.0 out of 5 stars Great read
Reviewed in the United States on July 14, 2017
Verified Purchase
I almost stopped reading after the first book...too much junk about soulmates and love you forever...sort of beating a dead horse. But I'm glad I didn't! What a great take on surviving a different sort of apocalypse. What a thrill ride. The plot is full of twists and turns that you just can't anticipate. Looking forward to the next book!
Read more
Helpful
Report abuse

Philip Tomlinson
5.0 out of 5 stars A Drama of Survival of Liberty in Crisis
Reviewed in the United States on July 6, 2017
Filled with drama and action, vivid character definition, and great storytelling, “The Walls of Freedom” audio book by Sara F. Hathaway presents a survival scenario after a devastating catastrophe in the U.S. that led me to realize how much I take for granted and how much I need to prepare for whatever lies ahead. In her own lively and creative way, the author instills survival knowledge and skills and triggers the wide range of difficulties and emotions that can and would arise if the world I’m comfortable in and take for granted falls apart. In the end, I’m left asking what kind of nation, city, community, and family do I want to live in, what kind of a person do I want to be, and where is the proper balance between individual freedom, justice, and liberty and governmental responsibility and social welfare? What are the limits of human rights in calm and in crisis?
Read more
One person found this helpful
Helpful
Report abuse

Susan
5.0 out of 5 stars Sarah Hathaway is a great new author!
Reviewed in the United States on July 15, 2017
Sarah Hathaway has me hooked! This it not the typical type of story that I normally chose, but since I have started reading these books I just can't put them down. The journey in The Walls of Freedom really makes you stop and think, appreciate the things we have that we take for granted, and begin to imagine what life would be like without all of our conveniences. Throughout this book, Sarah introduces you to some intense situations and joyful events and has the writing ability to allow the reader to feel the atmosphere and the emotions of the various characters, I get into these books and eagerly turn the pages in anticipation for what will happen next! I can't wait for the next book!
Read more
One person found this helpful
Helpful
Report abuse

Laura Odabashian
5.0 out of 5 stars This new author is on fire!!!
Reviewed in the United States on May 8, 2017
I am not a writer on any level , but I do know a good read , and this story wasGREAT!! For me, this series kept me up all night reading not wanting to pause the journey. A must read! You'll learn so much and want to be as productive in your own life as possible while reading these books. Each book sucked me in not giving me a single chapter to relax. Sara Hathaway, please keep writing as your brain is extraordinary !!!
Read more
One person found this helpful
Helpful
Report abuse