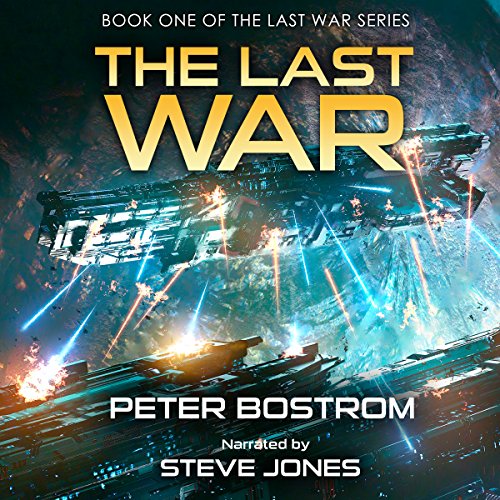 Earth is under attack. Twenty years after the American-Chinese war devastated our worlds, we finally have a tense peace. But legendary American Admiral Jack Mattis, on his inspection tour of the first joint American-Chinese space station, finds himself in the middle of the unthinkable: an alien invasion. Their ships are powerful, their weapons overwhelming. And in the confusion, our tentative peace with the Chinese is shaken to the core. Taking command of his old battleship, the Midway, Admiral Mattis races the alien fleet to Earth, desperate to prevent the utter destruction of humanity's home. And in Earth's darkest hour, Mattis must unify and lead old adversaries to the fight against a common enemy, one that doesn't care about flags or borders. An enemy driven by malevolent hate and a thirst for blood. An enemy that cares for one thing only: Earth's destruction.

Jas P
5.0 out of 5 stars Brilliant Characters, Amazing Starship Combat as 2 Enemies face a new threat that could destroy them both!
Reviewed in the United States 🇺🇸 on April 3, 2017
Verified Purchase
The Last War – The Last Wars Series #1 – Peter Bostrom (Nick Webb)
It would be fair to say that this is a brilliant book.
Bostrom has created a universe that is somewhere in our not too distant future, in which we have moved into space, started to colonise, set up space stations, and in which the Americans and Chinese have a huge interstellar war that results in not only the loss of a lot of ships and assets, but of life as well.
One of the main characters, Admiral Jack Mattis is a veteran of this war, having earnt his reputation and his Admiralty out of this war. At the start of this story, Mattis is in the company of another main character Senator Pitt, as they fly to a new space station, ‘Friendship Station’, that is now co-owned by both the Chinese and Americans. The war has only recently ended and is still raw for many, with fresh wounds still laying open on both sides. The space station is meant to signify a peace offering for both sides, an opportunity and a symbol that peace will be possible.
But as these two former enemies try and come to terms with their fragile peace, out in the far edges of human territory, an unknown fleet annihilates an American station, killing all on-board.
As everyone gathers at Friendship Station to signify the end of the war and the opening of the station, news of this tragedy reaches them, and the fragile peace is suddenly threatened. The Americans immediately blame the Chinese, that is, until the unknown fleet appear out of nowhere and threaten everyone.
I don’t want to give too much more away, because what unfolds from here is a truly spectacular Sci-Fi Novel that has to be read to be believed. There is political intrigue, some exceptional starship conflict that is described in such captivating detail, you feel like you are on the bridge of the ship with the characters as they fight for their lives.
As the story unfolds, there are numerous outstanding characters to create a compelling story that you just can’t put down. There is the grizzled Admiral Mattis, the snake like Politician Pitt, a reporter from the war who knows Mattis, Ramirez. There are also characters on the Chinese side, most notably Captain Shao, who is utterly brilliant.
The numerous minor characters of the bridge crew bring the action scenes to life (as well as the Political and many other in-between scenes as well). One of the more amusing characters is the Chief Engineer, who although human, appears to be somewhat removed from human emotion due to his engineering gifts, leading to some ‘interesting’ conversations on the bridge.
Overall, this is a sensational Military Sci-Fi book, for anyone who likes a story with a bit of mystery, Political Games, fantastic Characters, and some awesome ship to ship combat.
Read more
5 people found this helpful
Helpful
Report abuse

John A. Perry
3.0 out of 5 stars Virtual re-hash of The Legacy Fleet series
Reviewed in the United States 🇺🇸 on August 20, 2019
Verified Purchase
I began The Last War really enjoying it. I like the classic story of the grizzled vet who finds himself in another battle. But then I realized the plot and story elements are virtually IDENTICAL to book 1 of Nick Webb's other series, The Legacy Fleet. While I enjoyed the Legacy Fleet series when I read it a couple years back, I was pretty frustrated seeing the exact same plot rehashed here in a brand new "original" book.

Both books include the identical elements:
- a period of human peace and complacency;
- an unknown alien force emerges at the outer edges of human space;
- said alien force absolutely shreds the earth defenses and is making its way toward Earth;
- grizzled commander with peacetime insecurity commands an old warship that is destined to be a museum;
- said museum-grade warship becomes the last line of defense against unknown alien threat;
- grizzled commander leads humans to victory despite incredible odds and museum-grade ship takes a royal beating; and
- conclusion with "stunning" revelation as to origin of unknown alien threat, building lead to Book 2

It's not a bad story but I just felt like I had been completely duped into buying a book I already owned and had read. Granted, I've not read any more books in the series so I can;t fairly comment on the rest of the series. I am sure they found ways to make it different from the Legacy Fleet. But as this book unfolded I went from interested, to amused, to annoyed, to downright irritated. Regardless, the story is a good one and the protagonist is sympathetic and likable. However, it is nevertheless a repeat.
Read more
15 people found this helpful
Helpful
Report abuse

William S. Morris
5.0 out of 5 stars Uniquely good.
Reviewed in the United States 🇺🇸 on May 24, 2017
Verified Purchase
It seems that much of sci fi is military battles. I've become very jaded, and dislike the concept of fleets come together; ships blow up; big blooms of fire occur; and miraculously our side wins. It is hard to do anything else, and this book is not any different. This book even has the last minute epiphany by the commander that succeeds in destroying the enemy fleet. Nevertheless there are some different aspects that are unique, e.g., asking a potentially unfriendly ally to shoot you so you can get away; Actual mistakes borne by the heat of battle; political intrigue of an unexplainable nature; and people dying who really shouldn't. This is a starter book of an obvious series. There are unexplained events and circumstances that will need to be cleared up, but the book concludes. I hope the author can keep up the creativity. This book presents a standard that the author should try to maintain. I wish him luck. I might suggest that he clear up some potential errors. There is the use of naval idioms that really don't fit e.g., sinking various space ships. We're not on water so there's no place to sink. Pushing rudders can't be the same as when flying an aircraft. There's no wind for airfoils to act upon. When the pilot pulls back upon the stick, what makes the fighter go relatively in an up direction. If rudder, how is the yaw produced? If the stick is moved sideways, what does the fighter do, and how? I've cut a bit of slack regarding these rather jarring parts of the book because they can be explained in space terms, but right now, the author sounds like a land lubber.
Read more
2 people found this helpful
Helpful
Report abuse
See all reviews

G David Rose
1.0 out of 5 stars Silly Story
Reviewed in the United Kingdom 🇬🇧 on November 16, 2017
Verified Purchase
A very silly story line - an admiral (a most unlikable character) taking over command of a ship. Obviously the author has no understanding of how rank works. The other characters are stereotyped and two dimensional who behave in infantile ways. Struggled to get halfway through the book before giving up in disgust.
Read more
2 people found this helpful
Report abuse

Colin
5.0 out of 5 stars A bit of everything, would recommend to anyone who enjoys space battles and conspiracy
Reviewed in the United Kingdom 🇬🇧 on June 18, 2018
Verified Purchase
4 well told stories. The off-ship dialogue got lost occasionally; however, the main battles were really well told. Would recommend to anyone
Read more
One person found this helpful
Report abuse

The Caithness Beast
5.0 out of 5 stars A cracking read. Something a wee bit different
Reviewed in the United Kingdom 🇬🇧 on July 27, 2017
Verified Purchase
Wasn't sure what to expect as I have never read anything by this author before. What a great read. Good story, with some intriguing characters.
Read more
2 people found this helpful
Report abuse

Black Tor
3.0 out of 5 stars Fair start
Reviewed in the United Kingdom 🇬🇧 on May 4, 2017
Verified Purchase
The enemy appear powerfully armed but can't seem to manage what should with numbers and superior tech be an easy victory. Short chapters there is little description or tech. However for a quick read it was enjoyable I will read the next book!
Read more
5 people found this helpful
Report abuse

Kindle dad
5.0 out of 5 stars Great story suspense
Reviewed in the United Kingdom 🇬🇧 on June 15, 2020
Verified Purchase
I chose this rating as it kept me enthralled from start to finish, look forward to reading the second instalment
Read more
Report abuse
See all reviews