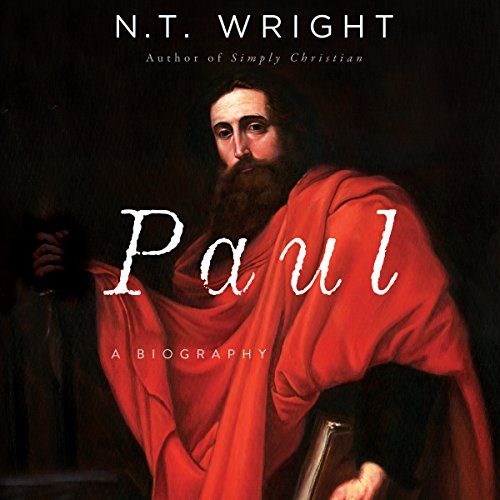 List Price: $34.22
You Save: $2.23 (7%)
By completing your purchase, you agree to Audible’s Conditions Of Use
Sold and delivered by Audible, an Amazon company
Share

4.7 out of 5 stars
4.7 out of 5
1,115 global ratings
How are ratings calculated?
To calculate the overall star rating and percentage breakdown by star, we don’t use a simple average. Instead, our system considers things like how recent a review is and if the reviewer bought the item on Amazon. It also analyzes reviews to verify trustworthiness.

EEM Jerry
5.0 out of 5 stars Paul Was NOT A Misogynist!
Reviewed in the United States on March 5, 2018
I read this book in a little over a week, finishing last evening. It is classic N. T. Wright. He attempts to get into the psyche of the former zealous Pharisee to see what made him tick following his Damascus Road experience. Paul comes across as a loveable, but a sometimes prickly defender of God's Covenant People, now extended to include Gentile believers in Jesus. Paul, Wright contends, never left his Jewish roots, but he did understand them now in terms of Jesus as Messiah.

One of his passions was the absolute unity of Jew and Gentile in the one body of Christ with no distinctions between them. He abhorred the idea of two churches, one for Jews and one for Gentiles. The is perfectly aware of the sensibilities of each group but insisted that they respect each other and have full fellowship - down to table fellowship - with each other.

He also maintains that, following the example of Jesus, Paul gave high value to women. He cites the number of women Paul greeted in his salutations to the house churches in Rome, for example, including one whom he recognizes as an "apostle." He argues that Paul is not a misogynist, but that he elevated the place of women in society.

His final summation of the success of Paul's work is priceless. To me, the highlight of the book was in the final chapter. There he contends that Paul;'s emphasis on love and an outward look in the churches he established and nurtured was responsible for Christians establishing hospitals in the 2nd & 3rd centuries, as well as the development of education for a population that was virtually illiterate prior to the work of Paul. Even the technological advance from books on scrolls to codex format he attributes to Paul's extensive use of the Old Testament Scriptures and the consequent need to be able to thumb through instead of scroll through.
Read more
178 people found this helpful
Helpful
Report abuse

Dallas J
1.0 out of 5 stars frustrating
Reviewed in the United States on January 1, 2021
Verified Purchase
Well, I am sorry, really, truly sorry, but I could not finish reading this book, simply because I was very disturbed by my perception of what Wright had to say in chapter two about Paul's journey to Damascus. I read and re-read Wright's thoughts several times to try to be sure I understood him correctly. And if I am correct, he was saying that what Paul (then known as Saul) experienced on the road to Damascus was a self-induced trance brought on by a deep meditation on the vision the prophet Ezekiel experienced when he saw the wheels, the four-faced creatures, the throne, and the One who sat on the throne. And I thought, "What? Really?" In the three-fold telling of that event in the book of Acts (chapters 9, 22, and 26) there is no mention of any such thinking on Paul's part. What happened was a sudden, unexpected encounter with the risen Jesus, who interrupted Paul's journey and began setting him on a whole new mission in life. To me Wright's interpretation of Paul's divine encounter undermines the rest of Paul's ministry, as well as the authority of the letters he wrote. I regret to say that Wright lost his credibility with me at that point.
Read more
48 people found this helpful
Helpful
Report abuse

Mennonite Medievalist
5.0 out of 5 stars I love this book like a brother
Reviewed in the United States on June 5, 2018
Verified Purchase
Yes, the book is repetitive, as you might expect or have come to expect from someone who writes as much as NTW—repetitive within the book itself and of Wright’s major insights published elsewhere. No, there aren’t biographical bombshells; Wright doesn’t know whether Paul was married, or when and how he died, or whether he went to Spain or wrote Titus. The book takes sides on a few well-established points of debate about Paul’s life, but the sides as well as the debates are well-established. Yes, a fair bit early on, the account shades toward biographical speculation on the one hand (was Saul mystically meditating on the road to Damascus?) and cultural exposition on the other that almost loses track of the individual being biographised.

But this is one of the most inspiring books I’ve read in a long time. The book turns on when Wright ties the themes of individual Pauline epistles to a reconstructed Pauline life behind them. The pathos of 2 Corinthians will never be the same—the account of 2 Corinthians is just where I fell in love with the book. Getting three or four pages on an epistle rather than two hundred seems to clarify and prioritise Wright’s style immensely. I understood much better how it all fits together, and I’ve read a lot of Wright (for instance, if you’re like me and waded through 1500+ pages of Paul and the Faithfulness of God but forgot on p. 1284 what was said on p. 1011, some repetition is a helpful aid to memory).

We need a biography of Paul, and this biography, not to reduce the Pauline epistles to autobiographical source material, but to reconstruct how the man lived out his own Christ-shaped theology and ethics, and to sense from that how we might. When Paul was alive, it wasn’t obvious who Christ was (or would be to believers in a mainstream or orthodox Christianity), or what it would be like to follow Him. The drama of Paul’s life is to see that meaning of a Christlike life contested in one of the first and most important Christlike lives. Christians have been living off the victories and clarities won in and through Paul ever since.
Read more
90 people found this helpful
Helpful
Report abuse

Karl Dumas
5.0 out of 5 stars Paul's letters teach us about Paul the Apostle
Reviewed in the United States on March 24, 2018
Verified Purchase
Wright has knocked it out of the park with this book. There's a lot more than dates and places as Wright digs into the culture and customs in which Paul would have found himself. Many biographers seem to feel that they need to make the subject of their book appear to be a saint. Wright has painted Paul as a human being: sometimes kind and loving, sometimes angry, and often coming across as arrogant.
I especially appreciated the way the Wright used Paul's letters to give more insight into Paul the Apostle, and Paul the Man.
This book definitely gives me a new insight into reading and understanding the Pauline letters.
Read more
54 people found this helpful
Helpful
Report abuse
See all reviews

C. M. Brown
5.0 out of 5 stars Paul with a difference
Reviewed in the United Kingdom on June 29, 2018
Verified Purchase
This is an excellent way of understanding the context of Paul's writings. Tom (or Professor the Reverend N T - or whatever) Wright has set out a biography of Paul which brings in Paul's writings at the relevant stage of his life. Very good in correcting the bad press that Paul seems to have had in so many quarters in recent and not so recent years..
Read more
Report abuse

Dr. Peter decalmer
5.0 out of 5 stars A great product
Reviewed in the United Kingdom on September 15, 2018
Verified Purchase
Those who want to study Pauls writings in more detail this is a must.
Read more
Report abuse

Amazon Customer
5.0 out of 5 stars I am delighted with the book.
Reviewed in the United Kingdom on April 8, 2019
Verified Purchase
I will be using this text to further my own personal knowledge of Paul of Tarsus.
Read more
Report abuse

Daniel Supimpa
5.0 out of 5 stars Powerful and Elegant
Reviewed in Brazil on January 15, 2019
Verified Purchase
4.5/5
A very interesting and mature work presenting the life and thought of the most important Christian thinker in ancient history: the Apostle Paul. As a result of a whole research life on the figure, Tom Wright deals with confidence and—most of the time—with clarity about Paul in his historical context. Although aware of both Jewish and Roman backgrounds, Wright emphasizes—way more, one should say—the former as the matrix through which Paul is trying to read and explain the Christian faith. The second chapter, on the significance of "zeal" for the young Saul was very helpful for me. The question of change of style in some of Paul's letters (esp. from 1 to 2 Corinthians) as a result of experiences of deep suffering in Ephesus is also quite thought-provoking.

However, I still bring some important questions concerning the whole work. The main ones are:

1) It seems like Wright speculates too much about Paul's prayer life. For instance, according to Wright, the significance of Paul's conversion on the road to Damascus is directly related to the Jewish practice of prayerful meditation in key passages, especially Ezekiel 1. Although a fascinating suggestion, it has very little biblical-historical basis. No direct scriptural echo is pointed. But for Wright, relating Ezekiel 1 to the Damascus experience explains why Paul suddenly understood why the One God Creator was present in Jesus Christ. Interesting, but too thin.

2) Wright is not clear concerning the Pauline authorship of the Pastoral letters. He spends several pages for Galatians and Romans, but Titus and 1-2 Timothy are briefly overviewed in 3 paragraphs, with a question mark on the chronology. Not that this position is exclusive to Wright—several Pauline scholars affirm that these letters were not penned by Paul—but he gives little clue to the questions. Maybe this is not the book for that, but a straightforward position, either pro or against Pauline authorship, could have been taken.

3) Wright does not get to more complicated issues concerning Paul in his historical context. A good example is the longe-debated affirmations of Paul about women in church. Wright explores the democratic statement of Galatians 3:28, and how this was attractive for women in the Roman World (check the chapter "The Challenge of Paul"), but how can we set passages such as 1 Corinthians 14 or 2 Timothy 2 in Paul's life and historical backdrop? Again, we're dealing with a biography, not a theological introduction to Paul, but it would be at least interesting to consider these passages as part of Paul's influence, in order to answer one of the book's big question "Why was Paul's ministry successful" in spite of such limitations to the female gender?

All in all, this is a consistent book, and some paragraphs can make you rediscover the power of Paul's legacy (See the closing of the book on pp. 430-2). Even the way Wright explores Paul's insistence on the unity of Jews and Gentiles in Romans and in the last chapter is highly elegant, way far from dead academic halls we can find elsewhere. Here's an author in love with Paul, and who might make you have a "road to Damascus experience" with the apostle's life.
Read more
2 people found this helpful
Report abuse
See all reviews
Back to top
Get to Know Us
Make Money with Us
Amazon Payment Products
Let Us Help You
EnglishChoose a language for shopping. United StatesChoose a country/region for shopping.
© 1996-2021, Amazon.com, Inc. or its affiliates