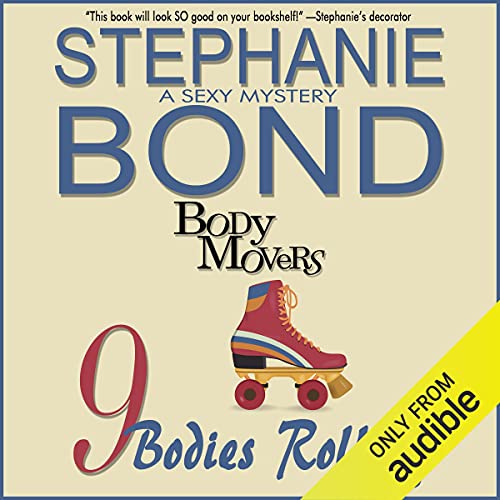 Round and round we go...

Carlotta Wren is still reeling over her parents' return after a 10-year absence. After putting her life on hold for so long, she's not sure how to move forward. Her new reality isn't exactly what she thought it would be, especially considering the altered circumstances of the three men in her life.

But her best gal-pal, Hannah, is always there to cheer her up, and Hannah has taken up a quirky new sport - roller derby! The matches are a colorful spectacle of bodies maneuvering to score, but the fun stops cold when a dead body rolls onto the scene. Carlotta believes the accident is anything but - especially when skaters' bodies begin to pile up - in and out of the ring!

Could Hannah be next?

If you're looking for laugh-out-loud audiobooks, check out the Body Movers series! To date, titles in the series include:

Q: Do I have to listen to the Body Movers audiobooks in order?

4.6 out of 5 stars
4.6 out of 5
481 global ratings
How are ratings calculated?
To calculate the overall star rating and percentage breakdown by star, we don’t use a simple average. Instead, our system considers things like how recent a review is and if the reviewer bought the item on Amazon. It also analyzes reviews to verify trustworthiness.
Top reviews

Ixi's Mama
4.0 out of 5 stars I love the body movers series and this book is no ...
Reviewed in the United States on May 30, 2018
Verified Purchase
I love the body movers series and this book is no exception. It is a great story and a great read. It helps close some chapters and I was glad that Wes and Carlotta compared notes earlier in the book so that they realized they were on the same page about the family. I just wish he would grow up some. After everything he has been through he still acts like a child. I would have loved to give it 5 stars, but the turn at the end with Carlotta and Coop ruined the book for me. It is unfair that Coop and Carlotta don't get a chance to actually see if they would work or not. Jack has treated Carlotta poorly, hasn't been honest with her, and never has faith in her theories or her in general. Coop has always supported her and even though frustrated with her busy-body ways has not put her down. Coop is a better man and a better person for her. Jack is a jerk who doesn't deserve her and it is time that she figured that out as well.
Read more
11 people found this helpful
Helpful
Report abuse

S. Dunham
4.0 out of 5 stars Reunions aren't all they are always cracked up to be
Reviewed in the United States on May 31, 2018
Verified Purchase
This is one of my all time favorite series! I did enjoy 8 but was a tad disappointed because I felt like it wasn't as in depth or had as many layers as the previous 6 books. I did think 9 was getting back to the old style and the characters really felt like themselves. I only took off 1 star because the usual murder mystery piece was more like a small subplot. That is my only negative so off to all the good stuff.

I did really love that Stephanie didn't go the unicorns pooping glitter route with the family reunion plus one! Of course there was going to be real life issues to deal with, and it was handled brilliantly. Poor Carlotta still can't seem to get a break and still has to be the glue to hold her family together. With the opioid epidemic grabbing national headlines, I'm also glad that Stephanie didn't miraculously cure Wes of his addiction. Opioids are hard to get off as it is, but mental addiction piece is even harder to overcome. I really enjoyed Carlotta and Prissy feeling out their new dynamic. Without giving any spoilers, this book screams to be careful what you wish for because you may get it. Things aren't always what you expect them to be.

Gotta love Hannah! Stephanie is able to write impossible situations without making them come across as moronic slapstick. The roller derby story line was funny and worked well with the main plot and subplots. All the characters continue to develop and grow which is refreshing. We also get to really meet Randolph and Valerie Wren.

As for the 3 men in Carlotta's life, it's kind of like a horse race and one man leads by a nose only to be overtaken by the other. For me, Peter was always out of the running and the real race was between Coop and Jack. I like both men. Both have flaws, Coop's alcoholism and Jack's overbearing nature...not to mention he got another woman pregnant. Just when you think one of them was out of the race and won by the other, all is not as it seems.

I usually take a day or so to read these. I tried not to binge read because I just want to savor the flavor, but I gorged myself. I hate that it was over and now I have to wait for book 10! If you are looking for a great read, start this series from the beginning. You won't want to miss a single page.
Read more
4 people found this helpful
Helpful
Report abuse

Booklover848
4.0 out of 5 stars One Step Forward, Two Steps Back
Reviewed in the United States on June 10, 2018
Verified Purchase
This book was a bit too short and lacked the depth of some of the other Body Mover books but it does move the series forward. I enjoyed seeing some newfound maturity in Carlotta and some character growth. Her career advancement and hiring of Patricia was a nice move forward for the character. Carlotta's distance from Jack was also welcome and long overdue as were her developing feelings toward Coop. I hope Bond continues to move Carlotta away from Jack; Carlotta deserves more than Jack can give and even Jack knows it! I enjoyed Carlotta's support of Peter and wonder if Peter might give Coop some competition down the road. I've never thought of Peter as a real contender for Carlotta but sitting in jail while sitting on another of Randolph's secrets may give Peter new strength. It may also allow Peter and Carlotta to put their issues to rest and move forward though Peter will need to work hard to sway me from being VERY Team Coop! Bond has set things up nicely for book 10 and I hope she capitalizes on that. I also hope we see more maturity in Wesley. Wes continues to have issues and provide drama in this book but he has some serious growing up to do. I love the friendship between Wes and Mouse and I hope to see more of that relationship - especially since I don't think much of Randolph at this point. I am normally not a fan of adding kids to mysteries series however Prissy is an important piece of glue that is helping to hold the Wren family together. I like Prissy but I don't want her to start getting mixed up in mysteries - she needs to stay a kid and stay on the family side of things. Love Hannah and her friendship with Carlotta! I'm enjoying Hannah and Chase. This book didn't have much of a mystery but the character interactions made it enjoyable and worth while. I wasn't happy with Coop at the end and I suspect I will be really mad at Rainie and the manipulation I suspect she engaged in at the end of book 9 but I guess we'll see in book 10. If you enjoy the Body Movers series this is a must read - enjoy!
Read more
2 people found this helpful
Helpful
Report abuse
See all reviews

Weeziewoo
1.0 out of 5 stars Disappointing
Reviewed in the United Kingdom on October 21, 2019
Verified Purchase
Ends that we’re tied up are now unraveled again as this dead horse is getting flogged across the finish line! There was no real story line and a forced (so called) mystery! I am now just appeasing myself with the fact that Coletta will eventually get with Jack, Wesley will eventually with Meg, mum will get better and dad will go back to work... the end (for me anyway)
Read more
Report abuse

LynneP
5.0 out of 5 stars Good story as usual
Reviewed in the United Kingdom on January 23, 2019
Verified Purchase
These books are a bit different but in a good way.
Read more
Report abuse

sub
5.0 out of 5 stars Five Stars
Reviewed in the United Kingdom on July 8, 2018
Verified Purchase
Such a fun book
Read more
Report abuse

Kate
4.0 out of 5 stars Series reboot, but light on mystery
Reviewed in Australia on May 30, 2018
Verified Purchase
Strictly for fans of the previous books. Technically, it is a stand-alone book, but you really need to have read the first eight to appreciate this one.

There is not much of a mystery in this book as the main focus is on Carlotta and Wes adjusting to having their parents back in their lives. It was an enjoyable read, but with the thinnest of mysteries, it wasn't as good as previous ones.

Carlotta is still torn between Jack and Coop, which is difficult to resolve in an ongoing series as you are going to disappoint half your readers no matter who your character ends up with. Wes is still screwing up. If there is a choice to be made, Wes will always choose the wrong one. I would like to see some growth on his part. I know his problems add conflict, but I would like him to move on and develop new problems to tackle rather than the same ones over and over.

Stephanie Bond said this book was like a reboot of the series and it was. It is just a shame there wasn't a real mystery to solve in this one. I do enjoy this series and will continue to read it. Hopefully, the next book will have a better mystery in it.
Read more
One person found this helpful
Report abuse

LaineyP
5.0 out of 5 stars So Glad it finally arrived.
Reviewed in Canada on July 5, 2018
Verified Purchase
I had to go back & re read 8 bodies is enough. I started 9 bodies but felt it had been awhile and I had read so many other books in between. I was glad I did re read the book, Mage the New Book 9 Bodies that Much Better.

I don't know whom to pick Jack is so Sexy & Unsure of him self, Coop is steady & Dependable & always there for her. Too bad she can't have both!
Read more
One person found this helpful
Report abuse
See all reviews
Back to top
Get to Know Us
Make Money with Us
Amazon Payment Products
Let Us Help You
EnglishChoose a language for shopping. United StatesChoose a country/region for shopping.
© 1996-2021, Amazon.com, Inc. or its affiliates