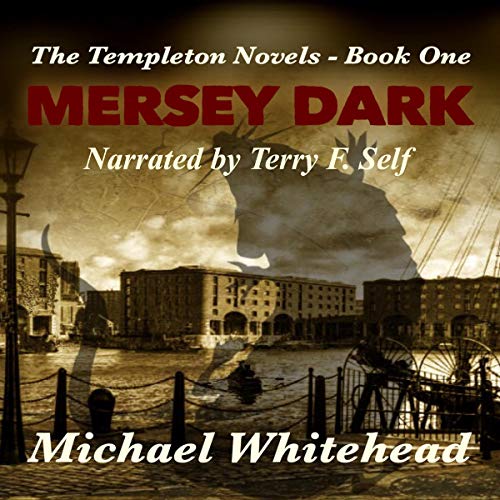 Michael Whitehead (Author, Publisher), Terry F. Self (Narrator)
5.0 out of 5 stars 7 ratings
See all formats and editions
Sorry, there was a problem loading this page. Try again.

When detective Nelson Tanner is sent to investigate a horrific double murder, he quickly realizes that the important question is not who is responsible. The true puzzle may be what is responsible for the killings.

Tanner is drawn into a conspiracy of dark magic and revenge. In order to save the people of Liverpool from annihilation, he must first survive his own destruction. Tanner is forced to wage war against a powerful enemy, and his only chance of victory lies with his new partner - a man named Templeton.

Mersey Dark is a tale of magic, horror, and revenge in which the deeds of the past may bring ruin to all.

5.0 out of 5 stars
5 out of 5
7 global ratings
How are ratings calculated?
To calculate the overall star rating and percentage breakdown by star, we don’t use a simple average. Instead, our system considers things like how recent a review is and if the reviewer bought the item on Amazon. It also analyzes reviews to verify trustworthiness.
Top reviews

Rich Restucci Amazon Bestselling Author
5.0 out of 5 stars Rats... Why did it have to be... rats?
Reviewed in the United States on February 5, 2020
Verified Purchase
A detective story rife with magic and monsters, Whitehead delves into the historic background of the late 1800s with this opus. Filled with mystery, action, and not a little gore, Mersey Dark’s Detective Tanner and the mysterious Mr. Templeton will keep you tearing through the pages in search of what will happen next, and to whom…

I’m interested to see where Whitehead takes us next with Templeton and look forward to the next in the series.
Read more
Helpful
Report abuse

DabOfDarkness
5.0 out of 5 stars Ooo! I wasn't expecting that!
Reviewed in the United States on October 5, 2019
What a delicious, spooky tale for the Halloween season! I love the Victorian setting for this story. Travel the underbelly of society with our detective Tanner and his enigmatic new partner Templeton as they attempt to solve a string of murders. There’s savagery and fur afoot!

And yes, that is Templeton from Whitehead’s Seas of Blood (another great spooky tale). You don’t need to read Seas of Blood to understand Templeton in Mersey Dark, but both are entertaining novels. Templeton is a Finder and he literally finds things – odd, terrifying things. He’s very cagey about who his employers are or even how he does what he does. I love the mystery this guy represents and greatly look forward to seeing what the author has in store for him in future books.

The book opens with a past event that shapes all the events of 1856 Mersey. David, a plantation slave, matches wills with Sir Thomas Richmond over medical care for his son. Sir Thomas is surprised by David’s choice and that choice is literally seared into the flesh and memory of his son. Vengeance can take years to fully brew.

Detective Tanner is an enjoyable character. He’s dedicated to this job but his superiors aren’t very interested in his opinions at first. The story also follows a young boy, the oldest of his siblings. He’s been caught thieving too often, even if he’s only stealing to feed his family (having no father and a drunk mom). Things look pretty grim for the lad but he meets a girl under dire circumstances. The two of them become instrumental in solving the case.

As for who or what is doing the killing – well, you’ll just have to pick up a copy of the book to find out. That’s where the supernatural element comes in. I was surprised! Here I was expecting a fairly standard werewolf tale but as small clues appear, I knew there was something else going on. I loved the slow reveal. Very suspenseful! 5/5 stars.

The Narration: Terry Self gives us another excellent performance. I have enjoyed all his narrations of Michael Whitehead’s novels. His range of accents and female voices is great. All the characters sound unique and the ladies sound feminine. I love his clipped, professional manner for Templeton, his young girl’s voice, and his enraged plantation slave accent. The pacing was spot on & there were no technical issues with this recording. 5/5 stars.

I received a free copy of this book in exchange for an honest review. My opinions are 100% my own.
Read more
Helpful
Report abuse

Pam Fields
5.0 out of 5 stars Excellent unique story!!
Reviewed in the United States on September 27, 2019
If you love scary, if you you love period pieces, monster stories, and well written stories with excellent character development.. this book is for you! Set in 1800’s Liverpool this riveting tale is a new take on monster stories. A local detective and Templeton, a mysterious “finder” set out to stop ravaging beasts from ripping their town, and its citizens, to shreds. Tons of action, characters you truly care about, and magnificent narration make this one to DEFINITELY check out!
Read more
Helpful
Report abuse

Natasha Smith
5.0 out of 5 stars Can't wait for the next book.
Reviewed in the United States on June 28, 2019
One of my favorite authors fun stories always with a twist. His books keep getting better.
Read more
2 people found this helpful
Helpful
Report abuse
See all reviews

Rich Taylor
5.0 out of 5 stars A great read
Reviewed in the United Kingdom on September 2, 2019
Verified Purchase
An excellent book with great story with lashings of detail of Liverpool in the mid 19th century. Sort of put me in mid of The Suspicions of Mr Whicher crossed with Torchwood. I throughly enjoyed it and look forward to Templeton's next outing.
Read more
One person found this helpful
Report abuse

GrandadG
5.0 out of 5 stars A Grand Read.
Reviewed in the United Kingdom on June 30, 2019
Verified Purchase
I first came across Michael Whiteheads books when i read the Legion of the Undead Series. This new book doesn't disappoint. Templeton and Tanner quickly establish themselves as believable characters. This is a well researched book with lots of references to Liverpool of the mid 19th century. In typical Whitehead style the book has a strong fantasy element. Well worth a read.
Read more
One person found this helpful
Report abuse

Heidi Alvey
5.0 out of 5 stars Great book, highly recommend
Reviewed in the United Kingdom on June 28, 2019
Verified Purchase
One of those books you can't put down once you start reading it, great characters and story keeps you interested from the first page till the last, one of the best books I've read for a long time
Read more
One person found this helpful
Report abuse
See all reviews
Back to top
Get to Know Us
Make Money with Us
Amazon Payment Products
Let Us Help You
EnglishChoose a language for shopping. United StatesChoose a country/region for shopping.
© 1996-2021, Amazon.com, Inc. or its affiliates