In real life, nothing is that clear. All it takes is one hero's sidekick picking a fight, and Penny and her friends are labeled supervillains. In the process, Penny learns a hard lesson about villainy: She's good at it. 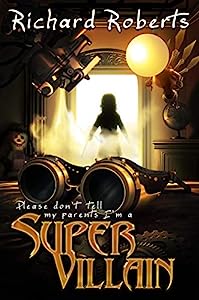 1
Please Don't Tell My Parents I'm a Supervillain
by Richard Roberts (Author)
4.6 out of 5 stars (719)
Penelope Akk wants to be a superhero. She's got superhero parents. She's got the ultimate mad science power, filling her life with crazy gadgets even she doesn't understand. She has two super powered best friends. In middle school, the line between good and evil looks clear.

In real life, nothing is that clear. All it takes is one hero's sidekick picking a fight, and Penny and her friends are labeled supervillains. In the process, Penny learns a hard lesson about villainy: She's good at it.

Criminal masterminds, heroes in power armor, bottles of dragon blood, alien war drones, shape shifters and ghosts, no matter what the super powered world throws at her, Penny and her friends come out on top. They have to. If she can keep winning, maybe she can clear her name before her mom and dad find out.
Read more 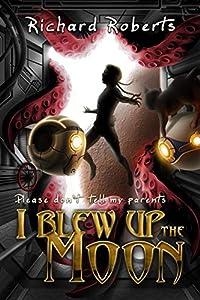 2
Please Don't Tell My Parents I Blew Up the Moon
by Richard Roberts (Author)
4.3 out of 5 stars (436)
Supervillains do not merely play hooky.

True, coming back to school after a month spent fighting—and defeating—adult superheroes is a bit of a comedown for The Inscrutable Machine. When offered the chance to skip school in the most dramatic way possible, Penelope Akk can't resist. With the help of a giant spider and mysterious red goo, she builds a spaceship and flies to Jupiter.

Mutant goats. Secret human colonies. A war between three alien races with humanity as the prize. Robot overlords and evil plots. Penny and her friends find all this and more on Jupiter's moons, but what they don't find are any heroes to save the day.

Fortunately, they have an angry eleven-year-old and a whole lot of mad science…
Read more 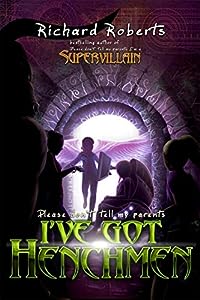 3
Please Don't Tell My Parents I've Got Henchmen
by Richard Roberts (Author)
4.5 out of 5 stars (295)
What would middle school be like if half your classmates had super powers? It's time for Penny Akk to find out. Her latest (failed) attempt to become a superhero has inspired the rest of the kids in her school to reveal their own powers.

Now, all of her relationships are changing. She has a not-at-all-secret admirer, who wants to be Penny's partner almost as much as she wants to be Penny's rival. The meanest girl in school has gained super powers and lost her mind. Can Penny help her find a better one? Can she help an aging supervillain connect with his daughter, and mend the broken hearts of two of the most powerful people in the world? And in all this, where will she find time for her own supervillainous fun, or even more dangerous, to start dating?

It's going to be a long, strange semester.
Read more 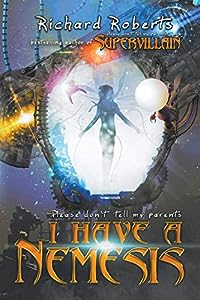 4
Please Don't Tell My Parents I Have a Nemesis
by Richard Roberts (Author)
4.5 out of 5 stars (230)
It's summertime for supervillains!

Or maybe not, because for Penelope Akk, there is still one foe she has yet to defeat: her own reputation as Bad Penny. It's been a fun ride: fighting adult heroes, going to space, and inspiring the rest of her school to open up about their own powers.

Sooner or later, that ride has to end, and with school out of the way Penny is hatching a mad scheme to end it on her own terms. Will that go smoothly? Of course not. Penny's left too many unsolved problems behind her already, like ghosts, seriously crazy friends, and angry little girls from Jupiter.

One by one, they'll have to be dealt with before she can do battle with herself. She'd better hurry, because her parents are closing in. Whether she confesses or not, this time they will find out her secret.
Read more 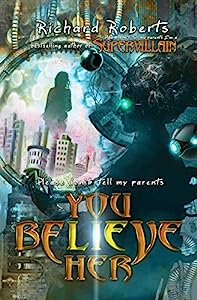 5
Please Don't Tell My Parents You Believe Her
by Richard Roberts (Author)
4.6 out of 5 stars (227)
Middle school supervillain Penny Akk has defeated every challenge thrown against her. She has bested heroes, villains, weirdos who can't make up their minds, robots, aliens, friends, rivals, enemies, natural disasters, secret admirers, and her own shyness.

Now she has only one opponent left.

Her own super power.

...and the other Penny who stole it.
Read more 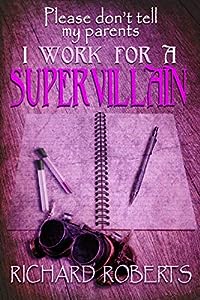 6
Please Don't Tell My Parents I Work for a Supervillain
by Richard Roberts (Author)
4.6 out of 5 stars (343)
What do you do when you have the wrong super powers? Magenta's older brother is a superhero. She's starting high school at the school where kids with powers go, including the famous Inscrutable Machine. Except, Magenta's powers are no good for fighting. Her potions are useful, not dangerous. Her other power is just humiliating. What Magenta has plenty of is determination, and she tries fighting a supervillain anyway.

But for Magenta, failure is the beginning, not the ending. Suddenly she has a part-time job working for that same supervillain, who doesn't seem very villainous. She spends her afternoons buying mad science from smugglers, copying memories into a magic book, delivering messages to evil lawyers, and always, always, putting on a show. Soon, she's ducking heroes who want to save her from herself, and her best friends, who don't know the sidekick they're chasing is Magenta.

Making sure her parents don't find out is the easy part.
Read more 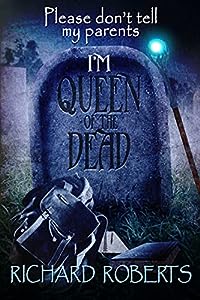 7
Please Don't Tell My Parents I'm Queen of the Dead
by Richard Roberts (Author)
4.6 out of 5 stars (241)
Avery Special is the world's only living necromancer, and she's pretty bad at it. She also just moved to L.A., where trouble has been waiting for a necromancer. Trouble that doesn't care how strong she is, or that she's only fifteen. Monsters, magical artifacts, occultists and television producers only care that a real necromancer is back.

There are definitely upsides. Chris, Annie, Sue, and Peggy have their own creepy super powers and are the best friends a girl could hope to make on her first day in a new city. Her Pudgy Bunny coloring book can teach her more than a stack of grimoires. Her ghostly ancestors are so eager to help it's annoying.

Not that she has time for any of that, because Chris and Sue are both in love with her.
Read more

Shui
4.0 out of 5 stars Fun Quick Read
Reviewed in the United States 🇺🇸 on February 20, 2016
This series of book is a fun quick read about misfits coming together to become superheroes except they get mistaken as villains. A hilarious story of the children trying to find a way to be perceived as heroes instead of villains. One star was taken off for the children at times seeming too intelligent at least in comparison to the adults in their lives. Most characters are fleshed out and I enjoyed reading all three of these books!
Read more
3 people found this helpful
Helpful
Report abuse

name
4.0 out of 5 stars Need third
Reviewed in the United States 🇺🇸 on February 15, 2016
A while ago, I read the first and second books and absolutely LOVED it! Just need the third book to finish it off. Read this series!
Read more
2 people found this helpful
Helpful
Report abuse

Seth
5.0 out of 5 stars Mad science bildungsroman with female lead
Reviewed in the United States 🇺🇸 on February 11, 2018
Originally picked up the first one at a Barnes and Noble where it was sitting on an employee recommendation sign. Read the first page and knew I had to buy it. Read it twice that niught. Penny and the Inscrutable Machine have had adventures and missteps; I didn't like book II as much but when I stopped to analyze it, book II had everything that made book I great. Now we're accelerating into the final confrontation - book V is out soon - and I highly recommend getting into the whole thing.
Read more
Helpful
Report abuse

Brandon
5.0 out of 5 stars Steam punk mad science
Reviewed in the United States 🇺🇸 on May 7, 2018
This is steam punk mad science at its best! With tons of good old fashioned super hero banter thrown in for good measure.
Read more
Helpful
Report abuse

Incognito
5.0 out of 5 stars I can't wai t for the next book to be available on fire!
Reviewed in the United States 🇺🇸 on October 25, 2017
I really love this book. Great for reading over and over again, riddled with small details.
Read more
Helpful
Report abuse

tashi
5.0 out of 5 stars READ
Reviewed in the United States 🇺🇸 on April 23, 2016
I read this . book almost a year ago. Even my son (a non reader) was pulled in. Fun read. Def. recommend.
Read more
4 people found this helpful
Helpful
Report abuse

Thunderbolt
5.0 out of 5 stars ilovereading
Reviewed in the United States 🇺🇸 on April 11, 2016
i loved all the books can you write more books about penelope,ray and clair? this was/is my favorite series of books although,it took me more than one month to finish. csn you make the books even longe
Read more
One person found this helpful
Helpful
Report abuse
See all reviews
More About the Author 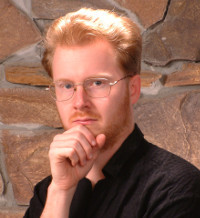 Richard Roberts is drawn to dark, strange fairy tales, which of course is why he got famous for his perky middle school supervillain stories instead.

That presents the two halves of his work, the fun and crazy, and the dark and weird. In both cases, he does his best to entertain, to look at old ideas to see how strange they are if you think them through, and to make a story where his characters earn their happy endings.