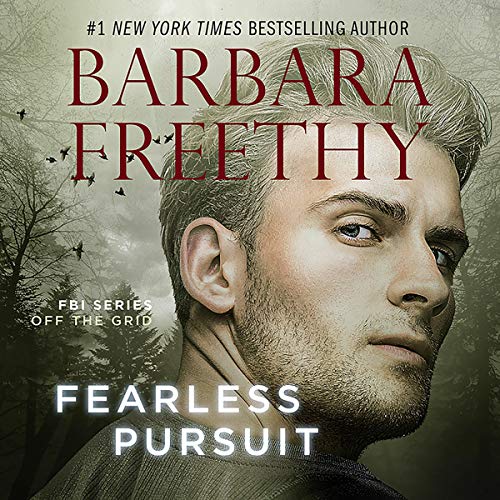 List Price: $24.95
You Save: $7.96 (32%)
By completing your purchase, you agree to Audible’s Conditions Of Use
Sold and delivered by Audible, an Amazon company
Share

4.7 out of 5 stars
4.7 out of 5
574 global ratings
How are ratings calculated?
To calculate the overall star rating and percentage breakdown by star, we don’t use a simple average. Instead, our system considers things like how recent a review is and if the reviewer bought the item on Amazon. It also analyzes reviews to verify trustworthiness.
Top reviews

Patti Lucas
5.0 out of 5 stars Loved the Surprise Villain - Great Romantic Thriller for Jax & Maya
Reviewed in the United States on October 31, 2020
Verified Purchase
Barbara Freethy has once again delivered an incredible romantic thriller with Fearless Pursuit. Each book in Barbara Freethy's Off the Grid: FBI series gets better and better, and I think that Fearless Pursuit is my favorite book in the series. Although, I think that after I have read each book in the series. I absolutely loved Fearless Pursuit, the eighth book in her Off the Grid: FBI series. Fearless Pursuit had me guessing throughout the story what was really happened to Natasha Pertova and the other thrilling events that took place. It was truly a surprise villain that I did not see happening. I could not put it down. I loved every page. I really enjoy how the book is told from the perspective of the main characters. I love getting the insight and feelings from the different characters. Barbara Freethy has once again proven that she is a master storyteller. Fearless Pursuit is the story of Jax Kenin, FBI Special Agent who was working undercover as a bartender at the Firebird Club and Maya Ashton, film maker working on making a movie about what really happened to her paternal grandmother, Natasha Petrova, a famous movie star, who is believed to have committed suicide over thirty years ago. Maya wants to tell the real story about Natasha for her grandfather, Phillip and hopes for a different ending. Jax and Maya meet at the Firebird Club, the private club where Jax is working undercover as a bartender investigating Russian spies. Maya’s grandfather, Phillip recently located Natasha’s journals in a long-forgotten safety deposit box. Maya goes to the Firebird Club in an attempt to talk to some of the men mentioned in her grandmother’s journals. Maya sees photos of her grandmother, from the former Russian House club that burnt years ago on the same location as the Firebird Club. After multiple attempts on their lives, the relationship between Jax and Maya changes. Jax fights his feelings because he does not want Maya’s search for answers into her grandmother’s death to interfere with his case. Maya breaks things off when Jax admits that he is an FBI agent working undercover, and she does not trust him because he lied to her. I loved the relationship between Jax and Maya changed and that Maya was willing to give Jax another chance. Jax reaches out to his team for help when things got complicated. I love how Jax gets answers into his own past and the death of his own parents when he was a small child. Eventually all clues lead them to who they think is really behind Natasha’s murder, but they were wrong and I did not see that happening. That was such a surprise twist for me. I really enjoy the poignant and bittersweet moments, the plot twists and the surprises that I have come to love and expect in Barbara Freethy's books and Fearless Pursuit did not disappoint. One of my favorite parts of the story are the poignant moments that Maya has during conversations with her father, Rex and the guilt that he felt over Natasha’s death, and her relationship with her grandfather, Phillip. I loved all the secrets that Jax and Maya shared with one another. I love that all the characters from the previous books were included in Fearless Pursuit. It felt like a family reunion and I loved catching up with the other characters from the series. I love how all Barbara Freethy's epilogues, wrap up the ending of the story and are always my favorite part of her books. I love how all the loose ends got tied up. I love all the characters and the way Barbara describes the locations in and around Los Angeles. It was really an incredible story and I loved every page.
Read more
One person found this helpful
Helpful
Report abuse

JMG
2.0 out of 5 stars Frustrating book due to lack of author research and knowledge of basic technology
Reviewed in the United States on August 17, 2020
Verified Purchase
This book was frustrating. The author neglected to do her research. A person found alive yet in distress would never just be allowed to die. At minimum CPR and Naloxone would be attempted by first responders given the apparent tourniquet mentioned which also makes zero sense in and of itself. There was also a TSTL moment when the heroine just mosied
away from her safe space with her sister based on a text- yuck- give me a break. There were also additional, somewhat backwards moments noted like security cameras etc. please endeavour to be more thorough if you choose to include these details. We have two Ring doorbells- zero subcontracted monitoring but they alert us when anyone approaches our home - that's just basic- an FBI agent would presumably be far more sophisticated.
Read more
One person found this helpful
Helpful
Report abuse

Kindle Customer
4.0 out of 5 stars Danger, Love
Reviewed in the United States on July 23, 2020
Verified Purchase
This was a fast paced thriller. I thought it was a great plot, though have both main characters finding solutions at the same place was a bit contrived. I will also say that at least for me, events and declarations of love happened too quickly. Such an intricate Russian spy ring active for over 30 years would not be identified and the guilty brought to authorities in a week's time. This, coupled with Jax and Maya jumping into bed together and declaring love after one week is too fast to feel authentic. Still, I won't deny that it an exciting, fast, entertaining read.
Read more
One person found this helpful
Helpful
Report abuse

Gracie Bustillos
5.0 out of 5 stars Great Book
Reviewed in the United States on August 12, 2020
Verified Purchase
I just love this series. This is another exciting book in the Off the Grid FBI series. Barbara has such a writing talent that makes you feel like you are part of the story. Another remarkable book it will have you on the edge of your seat not wanting to put it down.
Read more
One person found this helpful
Helpful
Report abuse

Robert and Sue Wilbarg
4.0 out of 5 stars Twisting plot
Reviewed in the United States on July 27, 2020
Verified Purchase
I loved Maya and Jax. Two people who meet by coincidence and find they have way more in common than they knew.
What I didn't like was huge cast of background players. Had trouble keeping them all straight.
Read more
One person found this helpful
Helpful
Report abuse

Kindle Customer
5.0 out of 5 stars Great
Reviewed in the United States on August 7, 2021
Verified Purchase
Amazing story! I love when an author leaves you wanting so much more. From the minute you open the first page the story grips you and pulls you in. Barbara brings all the characters to life and you can feel every emotion that Maya and all the characters go through. I can see this is being a great movie just as Maya did.
Read more
Helpful
Report abuse

Kindle Customer
5.0 out of 5 stars Great next FBI book from this author
Reviewed in the United States on October 14, 2020
Verified Purchase
I am a fan of this author, and this was a great next book in her series. she has a talent for sprinkling enjoyable romance into drama and mystery. This book had great twists and turns to keep me interested until in the end. I look forward to the next.
Read more
Helpful
Report abuse

Susan P Spurgeon
5.0 out of 5 stars Riveting
Reviewed in the United States on December 19, 2020
Verified Purchase
All the books in this series are a six. This plot is incredible with a twisted mystery that’s 26 years old. Fortunately the next book is available for preorder now.
Read more
Helpful
Report abuse
See all reviews

Lady-Anna
5.0 out of 5 stars And yet another one in the series that totally had me hooked
Reviewed in the United Kingdom on August 6, 2020
Verified Purchase
Gosh right from the start
And so it continued
By chapter 8 things are really progressing and getting more intriguing 50% I have a possible theory will I be right? 66% more twist - Oh my goodness 72% another revelation that could change everything - 80% I wonder, I wonder The Epilogue was quite emotional brought tears to my eyes Now looking forward big time to the release of Daring Deception book no 9
Read more
Report abuse

jd66
5.0 out of 5 stars Amazing book
Reviewed in the United Kingdom on July 31, 2021
Verified Purchase
Wow another fabulous story in this ongoing series. Each book is so different but so compelling to read and listen to. Can’t wait to read the next book now
Read more
Report abuse

Kindle Customer
4.0 out of 5 stars Ooh
Reviewed in the United Kingdom on August 22, 2021
Verified Purchase
Full of twists & turns. Maya is researching her grandmothers death, Jax is undercover FBI. Both get a lot more than they bargained for.
Read more
Report abuse

OLWEN WALKER
5.0 out of 5 stars Brilliant
Reviewed in the United Kingdom on July 25, 2020
Verified Purchase
Fab read slough woulgh expect anything different highly recommend
Read more
One person found this helpful
Report abuse
See all reviews
Back to top
Get to Know Us
Make Money with Us
Amazon Payment Products
Let Us Help You
EnglishChoose a language for shopping. United StatesChoose a country/region for shopping.
© 1996-2021, Amazon.com, Inc. or its affiliates