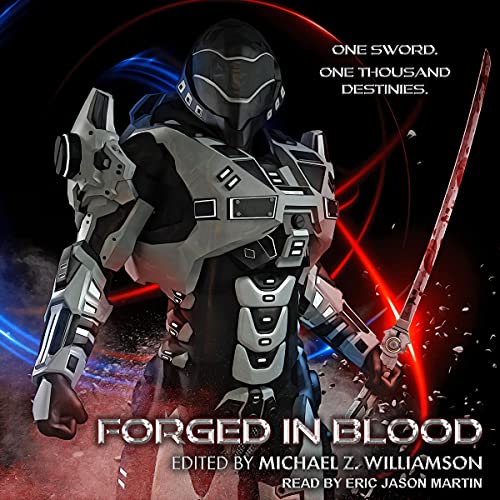 4.7 out of 5 stars
4.7 out of 5
172 global ratings
How are ratings calculated?
To calculate the overall star rating and percentage breakdown by star, we don’t use a simple average. Instead, our system considers things like how recent a review is and if the reviewer bought the item on Amazon. It also analyzes reviews to verify trustworthiness.
Top reviews

Jamie Ibson
5.0 out of 5 stars Come for the laughter, stay for the slaughter!
Reviewed in the United States on September 23, 2017
Verified Purchase
Forged In Blood kicked down the door, took no prisoners, pillaged and burned the competition, crushed its enemies, saw them driven before it, then released a bad*%$ mixtape of their women's lamentations (Now available on iTunes)*.

Oh right, the review. When was the last time you read a story that spanned two thousand years starring the same character? Never? I hadn't either. Why not try something new, and epic, and fantastic? Pick this one up and give it a whirl.
Find out exactly who Sergeant Lisa Riggs was and how she died. (Hint, she's in The Weapon too, but we didn't know it at the time).
Find out exactly how Rowan Moran, student of Iaido, won a peerless honor for the Freehold by rescuing the Caledonian Royalty armed "only" with his "ceremonial" sword.
Find out which well-known Baen author managed to slip a Monty Python shout-out into his story,
Find out what happens when you get two Chinrans, a Pacelli and a handful of other operatives into a fortified position and unlimited targets...
I laughed, I cried, (no exaggeration). I loved the whole thing from cover to cover.

The concept of an object, a sword in this case, as a subject to hang a series of short stories from is not new, but the coherence and quality of this work makes the theme work beautifully. It can be read as a novel, and that is quite remarkable.

The quality of the authors represented here is hard to touch, and they deliver. Each story is interesting, many are genuinely wrenching, and all are superbly written.
Read more
25 people found this helpful
Helpful
Report abuse

Travis G. Beck
5.0 out of 5 stars The Riddle of Steel
Reviewed in the United States on September 8, 2017
Verified Purchase
"And the secret of steel has always carried with it a mystery. You must learn its riddle, Conan, you must learn its discipline. For no one, no one in this world can you trust. Not men, not women, not beasts... This you can trust." [points to his sword] - Conan of Cimmeria's Father

"Steel isn't strong, boy; flesh is stronger...What is the sword compared to the hand that wields it?" - Thulsa Doom

The flesh is ephemeral, but the steel endures. Yet without the flesh the steel is useless. Down through the centuries, the sword has passed from hand to hand. The War Bride, she has been called. She exists for battle, to become one with a worthy owner and seek glory in strife. She has been broken many times. And reforged anew. These are some of her stories.

Michael Z Williamson is a subject matter expert on the making, use, and history of edged weapons. He combines his knowledge and writing talents with a host of other talented authors to tell the stories of the War Bride and her wielders. Whether, young or old, brave or cowardly they all are changed by their time with the sword. Some will not survive that time.

Mike and the other authors bring use comedy and tragedy, nobility and perfidy to offer us a glimpse into the ethos of the soldier and what it means to stand in the breach to serve and protect the ones they love.
Read more
12 people found this helpful
Helpful
Report abuse

Te Kee
5.0 out of 5 stars Very well done
Reviewed in the United States on September 6, 2017
Verified Purchase
Very interesting concept, well put together and outstanding main character. A warriors weapons would acquire a life of its own. Ask any warrior...thank you...😺
Read more
20 people found this helpful
Helpful
Report abuse

Mark Jewell
5.0 out of 5 stars Outstanding collection, don't pass this up!
Reviewed in the United States on September 9, 2017
Verified Purchase
An excellent collection of stories, which all share a common plot element of an ancient sword which has been passed down through the generations, from feudal Japan, to the Russo-Japanese War, World War II, through the present day and into the future to the establishment of the Freehold of Grainne and beyond.
Each of the stories link together very well, and the later stories give us additional insight to characters mentioned briefly in the first two books of the 'Freehold' series, as well as revisiting familiar characters from those same books.
Overall, an excellent addition to the 'Freehold' series...don't miss out!
Read more
11 people found this helpful
Helpful
Report abuse

thomas monaghan
5.0 out of 5 stars Warriors and soldiers linked by a Sword!
Reviewed in the United States on September 19, 2017
Verified Purchase
I read a lot of military SF and normally don't review them. I also don't usually enjoy anthologies as much as novels. Well reading this anthology was different. With a strong continuing theme and outstanding stories it was a book that I will re-read in the future. If you are interested in Mil-SF it is a must read. Each author brought a slightly different to warriors and the sword. I rated this anthology a 5 star because I don't know how it could be made better.
Read more
10 people found this helpful
Helpful
Report abuse

Smuckatelli
5.0 out of 5 stars Highly Recommended
Reviewed in the United States on September 9, 2017
Verified Purchase
This anthology is an amazing,and at times, exciting, read. Every single story works well and links together to build an overarching story. I bought the EARC and the eBook directly from the publisher, and the hardcover from Amazon. And I plan on buying a couple of the paperbacks for gifts/loaners.
Read more
16 people found this helpful
Helpful
Report abuse

Colonel 7.62
5.0 out of 5 stars 5/7, Would Read Again
Reviewed in the United States on September 6, 2017
Verified Purchase
A triumph of the moral and intellectual superiority of the authors. Particularly, Michael Z. Williamson again shows himself capable of crafting a quality story that is not perverted by identity politics and the groveling demands of social justice driven sci fi.
Read more
22 people found this helpful
Helpful
Report abuse
See all reviews

TimC
4.0 out of 5 stars Good addition to the freehold canon
Reviewed in the United Kingdom on March 30, 2019
Verified Purchase
My only problem with this was the slight down-note in the (possible?) death of some characters we have met elsewhere in Freehold. The basic approach of the book is to tell tales of fighting and valour which follow a Japanese samurai sword from battles on Earth through to battles off the planet. It works well and the voice of the sword itself is managed in a reasonably low key manner.
Read more
2 people found this helpful
Report abuse

Scott Osmond
5.0 out of 5 stars Top Notch Storytelling
Reviewed in Australia on June 19, 2018
Verified Purchase
Many anthologies can be hit and miss. I'm pleased to say that I enjoyed all stories in this one. A first class collection of story tellers helped. It's a story spanning 3 thousand years where a sword is present in many pivotal historical events. She is broken, reforged, cared for and neglected in turn but always finds herself used by worthy warriors. Kratman, Correia and Williamson's entries were my favourites. One of the major uniting themes in this book is that no matter how far tech improves events always count on the will, courage and commitment of those people doing the fighting and dying. Despite advances battle can be decided by cold steel in the right hands. Some familiar characters appear from earlier Freehold novels.
Read more
Report abuse

Kindle Customer
5.0 out of 5 stars Brilliant
Reviewed in Australia on March 23, 2020
Verified Purchase
A masterful collection of stories that work so fantastically well together, the different author styles mesh so well! A masterpiece!
Read more
Report abuse

Tom T.
5.0 out of 5 stars Great read
Reviewed in Canada on February 7, 2019
Verified Purchase
Its great to see a timeline story from such a unique perspective, I also like the glimpses into the past and future of this particular universe.
Read more
Report abuse
See all reviews
Back to top
Get to Know Us
Make Money with Us
Amazon Payment Products
Let Us Help You
EnglishChoose a language for shopping. United StatesChoose a country/region for shopping.
© 1996-2021, Amazon.com, Inc. or its affiliates