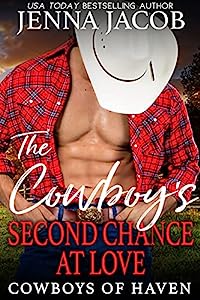 She finds her high-school flame to scratch an itch…and loses her heart.

Jade Hollis is having the crappiest day of her life. Laid off from her job? Check. Discovered her boyfriend is a lying, cheating snake? Check that, too. But she’s not wasting time on pity parties. Nope, she’s lighting a match to this dumpster fire and leaving town.

With memory lane guiding her, she winds up in quirky Haven, Texas, face-to-face with Colton Maddox—the one who got away. One look at the sexy cowboy and Jade is itching to find out if his illustrious reputation between the sheets is fact or fiction. The short answer? The man deserves a shrine. She decides to enjoy her detour a little longer, because one night isn’t nearly enough to work him out of her system.

But Colton has a secret that may change her plans forever… 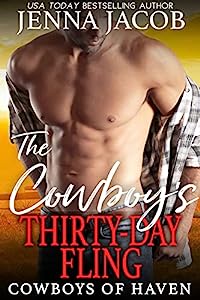 She swears off men…only to be tempted into forever.

Brea Gates is done. After surrendering her paycheck, her body, and her ever-lovin’ soul to a string of worthless exes—the most recent of whom lands her in jail—she decides she’s better off staying single and investing in batteries. Her friends from offbeat little Haven, Texas, bail her out and offer her a place to start over. Maybe now she’ll find some peace.
With her luck? Pfft…

The instant rough-hewn cowboy Sawyer Grayson sees Brea, he sets his sights on her. Since he’s temptation on two legs, no amount of dodging, dipping, ducking, or diving will save her man ban. How much can it hurt to enjoy a no-strings fling with the Stetson-wearing Romeo for thirty days? After the fun is over, she’ll trade in her spontaneity, thongs, and well-sated hormones for cozy mysteries and granny panties.

But Sawyer has a different offer, one that might change her mind—and her single status… 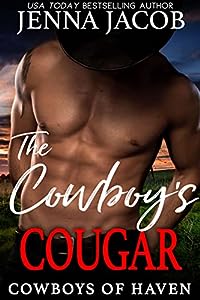 They say age is just a number…but is that true with love?

Gina Scott dishes out drinks, crude one-liners, and advice to the rowdy regulars at her bar in small-town Haven, Texas. After escaping a brutal past, she vows to never risk her heart again. But a long, lonely decade later, she’s tempted by a sexy cowboy a dozen years younger who makes her ache for things she can’t have, especially love. No matter how she tries to resist, the tenacious stud keeps wearing her down.

But what does a hot virgin want with a cougar like her?

Nate Grayson has spent four years fantasizing about Gina Scott. When he discovers their connection isn’t one-sided, he’s ready to prove she’s not too old for him and capable of giving her all the pleasure she craves. After learning there’s more to Gina’s reluctance than age, he’s hell-bent on tearing down her protective walls so he can spend forever with her. But he’s keeping secrets of his own…

When danger finds Gina, determined to destroy their future, Nate stops at nothing to save her life, and persuade her to say, “I do.” 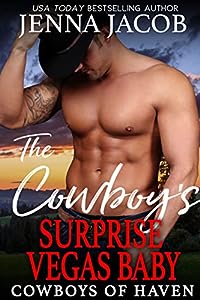 What happens in Vegas doesn’t always stay there…

While in Vegas for her sister’s ill-advised wedding, Ivy Addison meets the sexy cowboy across the hall, shares an impulsive night under his rugged body…and loses her heart. She tries to forget Noble afterward, moving to Haven, Texas to open a bakery. But she soon discovers the buns she sells aren’t the only ones in the oven.

Too bad she never asked her baby daddy’s last name.

Noble Grayson loves pleasing women. Commitment? Not so much… When his buddy plans to get hitched in Sin City, Noble saddles up for a weekend of hedonistic fun. Then he claps eyes on his stunning neighbor. It’s not his first rodeo with a one-night stand, but her touch brands him as hers. Even after he returns home, he’s blindsided by feelings for Ivy—until he visits the new bakery and gets the shock of his life. Unfortunately, Ivy has already heard about his bed-hopping ways. When he tries to convince her that he’s fallen fast and hard, she’s not buying it.

But in order to win her love and become a family, he’s willing to sacrifice everything…even his life. 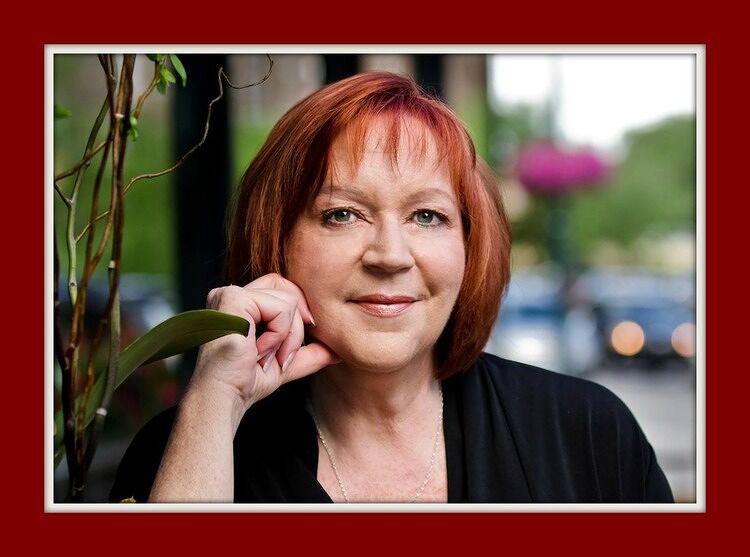 USA Today Bestselling author Jenna Jacob paints a canvas of passion, romance, and humor as her alpha men and the feisty women who love them unravel their souls, heal their scars, and find a happy-ever-after kind of love. Heart-tugging, captivating, and steamy, her words will leave you breathless and craving more.

A mom of four grown children, Jenna, her husband Sean and their furry babies reside in Kansas. Though she spent over thirty years in accounting, Jenna isn’t your typical bean counter. She’s brassy, sassy, and loves to laugh, but is humbly thrilled to be living her dream as a full-time author. When she’s not slamming coffee while pounding out emotional stories, you can find her reading, listening to music, cooking, camping, or enjoying the open road on the back of a Harley.