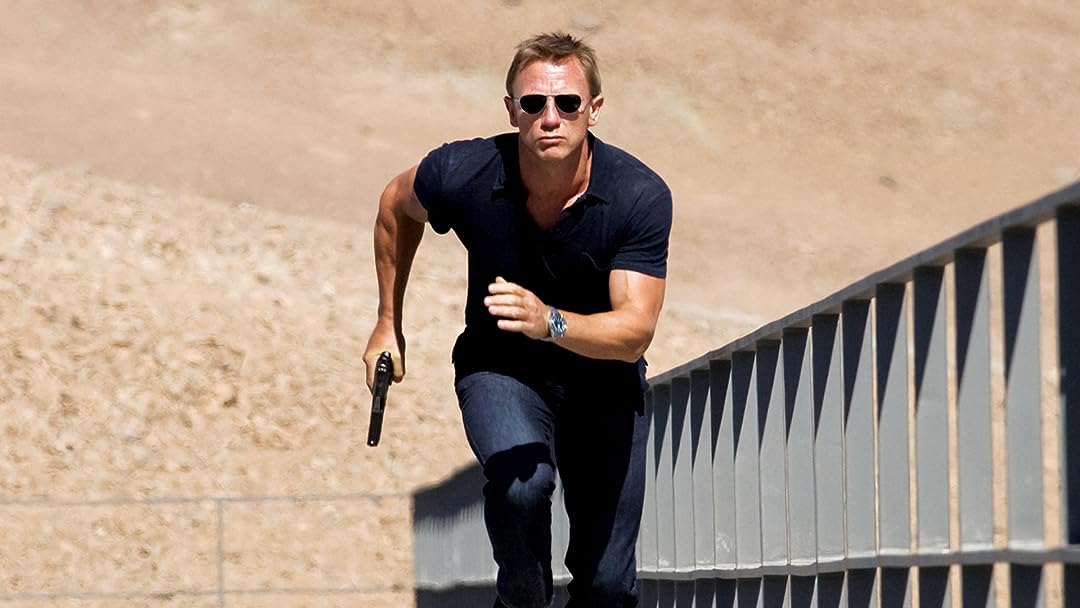 Save with with the Daniel Craig Bond movie collection on Prime Video shop now.

joel wingReviewed in the United States on November 30, 2019
3.0 out of 5 stars
Convoluted story distracts from what would otherwise be a good Bond film
Verified purchase
Quantum of Solace got a lot of criticism when it came out. That’s because of the convoluted story that starts off on one theme and then goes off on another.

Quantum starts with the end of Casino Royale. Bond shot Mr. White (Jesper Christensen) at the end of that film and MI6 wants to know what organization he works for. That leads to Bond’s next adventure. Here’s the problem. Bond’s chase across the world adds nothing to who exactly Mr. White worked for. All the viewer learns is that it is a powerful group with international pull. In fact it wouldn’t be until Spectre that this whole thing would be resolved. Instead the story ends up focusing upon control of natural resources, but it’s not the one everyone in the film thinks it is. If the writers had dropped the beginning and Mr. White, these problems would have never come up.

Otherwise, this is another great Craig-Bond film. The action is good. There’s some big misdirection. The problems with the story however are a big distraction.
C

BAITnessReviewed in the United States on December 6, 2020
1.0 out of 5 stars
This is the worst Bond movie ever made. An absolute disaster.
Verified purchase
Bond movies have a tumultuous past. Every Bond but George Lazenby has starred in at least one completely atrocious Bond film.

This is Daniel Craig's unfortunate entry onto the list.

This is one of the worst directed movies I have ever seen. The director and his cinematographer are idiots. Their constant cuts and shaky cam ruin every single scene. They are completely clueless, only caring to point the camera vaguely in the direction of the characters. They seem to think that camera cuts should increase in pace alongside action, which is something so unfathomably stupid that I cannot reason out how they came to this conclusion. The framing is nonexistent, the pacing is atrocious, the directing detracts from each and every scene. Literally every single student film or fan edit I have ever seen has been better directed than this. It is not even close. This movie should be in the conversation for worst directed film of all time, and is easily worse than even the original Bond films (and keep in mind those came out while directing was still a haphazard mess, and they were rushing them out in under a year each).

Unlike the original Bond films, there is nothing to redeem this atrocious directing. Though Daniel Craig might be capable of bringing some charm to the screen (like the eternally entertaining Sean Connery), he is never asked to. He is simply yet another stern faced action star, adding into a genre that lost its appeal years ago (and was never even decent to begin with).

The plot itself is equally terrible. It initially seems like every single plot point is unfinished... and if you care enough about the film to look up why, you will find that is literally exactly what happened. The writers strike interrupted this film, so the already terrible director and Daniel Craig himself tried to finish the writing. I am not making this up. Google it. The atrocious screenplay was literally finished by one of the worst directors of all time and an actor.

An amusingly interesting tidbit that I think wraps up the lovely crappy film with a nice crappy bow is the title song. Jack White and Alecia Keys perform "Another Way to Die," a song that is easily the worst Bond song of all time, but it could have been the best. Jack White was originally holding onto the riff for "Seven Nation Army" in the hopes that he would be asked to pen a Bond title. He ended up using it long before he did get the chance, and ended up making a far worse song using the same themes. It is not as awful as the rest of the film, but I think that it nicely exemplifies how every aspect of this film went as poorly as it possibly could.

kathleen mckeonReviewed in the United States on November 8, 2015
4.0 out of 5 stars
Modern Bond. Craig does great work.
Verified purchase
First, I was very much against Daniel Craig as Bond when he was first named.

Second, I regret my first impression. I was concerned he would be a timothy dalton or god forbid Lazenby.... Both of whom were cads of the worst kind - impossible to watch, sophomoric, utterly lame. Craig has delightfully alleviated my concerns. I am surprisingly enamored with him as Bond. I don't know who could replace him at present. I'm fond of Craig's Bond. Thank you may I have another.

Third, I also appreciate that the franchise is growing up a bit. Female characters have some substance. Dame Judy as M - greatness. Stories have a little more substance and pluck.

THIS FILM:
Good action adventure with not so many lines you need closed caption if hearing impaired. You get the gist no matter what. It's still pretty clear who the baddies are. Beautiful scenery. Dramatic sequences.

Orange CrushReviewed in the United States on April 25, 2018
5.0 out of 5 stars
Watching soon after Casino Royale and you won't be disappointed...
Verified purchase
People dumped on this one and when I saw it originally it wasn't that memorable. Then my wife and I decided to go on a Daniel Craig Bond marathon. Watching this a week after watching Casino Royale was the right move. The stories link together well and it works much better as the next chapter of Casino Royale rather than a standalone movie. We loved it.
14 people found this helpful

SLO WriterReviewed in the United States on July 19, 2020
4.0 out of 5 stars
Underrated Bond adventure
Verified purchase
QoS doesn't get enough love from critics and fans in my opinion. I just rewatched it again and it holds up nicely. Lots of action. Lots of violence. Intriguing plot and I love the set piece set against "Tosca" as a background. Very stylish by director Marc Forster.

Never did care for the title--I think "Solace" would have been enough. I also think that the character of Strawberry Fields is wasted and unnecessary. Within an hour of meeting Bond at the airport, she's sleeping with him? And then she's drenched in oil a la Goldfinger? That part doesn't work for me. The other female character was much stronger.

Really liked the fact that much of the movie is South America. Good use of locations.

Will definitely see this again!
2 people found this helpful

MisterEaseReviewed in the United States on December 25, 2020
3.0 out of 5 stars
Craig Is Still A Better Bond
Verified purchase
Casino Royale was supposed to be the appetizer to Quantum of Solace's main course. This is unfortunately not the case. QOS is a disjointed mess that cannot figure out who the real villain is, what the real plot is or why 007 should or should not care more or less. This results in a story without motivations. Indeed a major theme for the film is the ambivalence of the plot and the characters as it moves from one plateau to the next. It repeats a Cardinal Sin from Casino Royale in that there are two main villains, we only care about one of them and he is dead too soon. Still, Daniel Craig remains as the best Bond and his casting and performance keep this stinker afloat.
One person found this helpful

ReviewReviewed in the United States on November 24, 2019
5.0 out of 5 stars
James Bond Goes Slightly Left
Verified purchase
Quantum of Solace is one of the all time best of the James Bond films in that it refreshingly takes some chances by breaking away from the usually staid political mold of the James Bond universe and virtually apologizes in some places for MI6 and CIA working with villains and carrying out villainous deeds and explains some of the distasteful business of these agencies as a necessity of statecraft. The title of this film could even be 'Bond Goes Left'. This story is a decisive twist away from the usual type of James Bond story.
3 people found this helpful

MZ BLONDEReviewed in the United States on February 19, 2018
5.0 out of 5 stars
Five ***** Stars
Verified purchase
This movie was a real treat visually. I really enjoyed the scenes of Lake Garda and Siena, Italy. Having traveled to those two locations as a child, this movie gave my adult eyes a chance to see those again. That alone was worth the price of purchase for me personally.

The storyline itself is suspenseful.

The plot starts out with a discovery of treachery within the British Secret Service ranks. Also, there is some very poignant points of discord between Bond and M, M and her bosses, her bosses and the United States. Luckily all is resolved without catastrophe, and this has a somewhat happy ending. Thank you.
7 people found this helpful
See all reviews
Back to top
Get to Know Us
Make Money with Us
Amazon Payment Products
Let Us Help You
EnglishChoose a language for shopping. United StatesChoose a country/region for shopping.
© 1996-2022, Amazon.com, Inc. or its affiliates