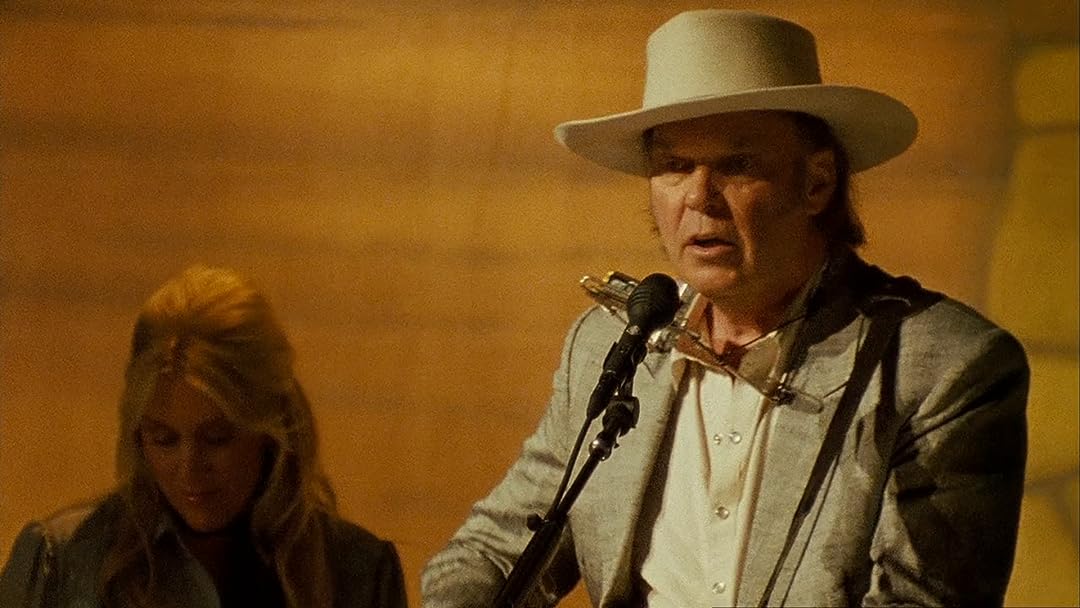 (893)
7.71 h 43 min2006PG
Filmmaker Jonathan Demme captures the rocker in concert before a live audience at Ryman Auditorium in Nashville, Tenn.

Anthony NastiReviewed in the United States on January 25, 2015
5.0 out of 5 stars
A Tour-De-Force Performance with Two Artists at the Top of Their Game.
Verified purchase
Concert films have a tendency to be hit or miss affairs; too often they rely on gimmicks such as gratuitous crowd shots, seizure causing jump shots, and other flash in the pan camera techniques that distract from the performance at hand. The difference between "Heart of Gold" and many other concert dvds is the fact that it was directed by a truly accomplished director with an eye for detail and using various different techniques to capture subtleties and nuances in each performance; for a performer as expressive as Young is when delivering his songs, Jonathan Demme is the perfect match for capturing the visual aspects of the concert. There are no cheesy MTV style jump cuts or split screen, just simple, beautiful camera work that doesn't distract from the nearly 20 beautiful performances featured.

The concert itself is just magnificent; I'll admit that I'm not the biggest fan of "Prairie Wind," but the record really does come alive in this particular setting; "It's a Dream" is the highlight of the first set, along with "Falling Off the Face of the Earth" and "No Wonder." It's the second set, however, that really makes this a truly special performance, with extremely touching renditions of "Harvest Moon," (maybe the best version ever), "Heart of Gold," and "The Needle and the Damage Done," among others. The closing performance of "One of These Days" is a joy to watch and listen to, a perfect summation of a job well done.

The musicians assembled hold their own against the very best outfits Neil has ever worked with (he's arguably never had a bad backing band), including longtime "Harvest" stalwart Ben Keith, keyboard legend Spooner Oldham, and of course Emmylou Harris; an accomplished vocalist, songwriter and musician in her own right, Harris gets almost as much facetime as Neil and elevates each performance where she is featured prominently, particularly on the jaunty "Old King."

"Heart of Gold" is a touching, entertaining and wholly successful concert film combining the talents of two truly special artists at the top of their game.

Kerri LewisReviewed in the United States on August 6, 2021
5.0 out of 5 stars
Neil Young Performance - Mellow and Reflective
Verified purchase
I love Neil Young's performance in this 2005 rrcording of Prairie Wind at the Ryman Auditorium in Nashville. It's a nice departure from his harder-hitting rock 'n roll and electric guitar. Instead it's acoustic guitar, his mood seems reflective, beautiful vocals from Neil, accompanied by Pegi Young, Emmylou Harris and others. Its a lovely mix of new material and old favorite songs.. The entire ensemble performance is entertaining and just makes me feel good!
2 people found this helpful

AmyReviewed in the United States on January 25, 2021
5.0 out of 5 stars
A great concert video
Verified purchase
Watched this Neil Young show on television and had to own it. It is a fantastic concert in all respects. The cost of the dvd is what it would cost to park at a show and you can relax and enjoy in your recliner .
4 people found this helpful

DJReviewed in the United States on May 23, 2021
5.0 out of 5 stars
Am I Limited to 5 Stars - Pure Gold
Verified purchase
I had this film on my list for quite some time and finally indulged in every sweet, golden minute. The Ryman is such a majestic backdrop for Neil's stories and songs. The artists assembled just exude joy with every note played or sang. The bonus at the end for those who wait beyond the credits is pure euphoria. Let's hope Neil has a few more of these docs ready to release in his incredibly prolific career! Long May You Run!
One person found this helpful

JudsonReviewed in the United States on June 9, 2011
5.0 out of 5 stars
A Fabulous Concert that Will Never/Ever Happen Again
Verified purchase
Wow ... what a treat for those lucky fans who got to see this concert in person. And a wonderful experience as well for those of us who only get to see it on DVD.

I'll just say it up front. Neil Young is by far my favorite musical artist. And his mellower "Harvest-type" acoustic singer-song writer music is what I like best about him.

Young is one of the most prolific and versatile artists of the rock era. Because he has made so much music in such a variety of styles, if you go to one of his concerts in about 90 minutes, you are liable to hear everything from the lilting acoustic sounds of "Helpless" on is old Martin, all the way to the sensory bombardment of "Cinnamon Girl" shaking the rafters on his vintage Les Paul.

But, what you won't hear anymore, is Neil settling down to an entire evening of his most memorable folk/country classics in which he leaves out almost nothing that his fans have come to hear.

That's why this concert was so rare and why it will probably never happen again.

In the "Heart of Gold" concert filmed at Ryman Auditorium in Nashville, it's obvious that Young is content to pay homage to the tradition of the venue and the expectations of his audience ... just this once.

So what you get, is a veritable greatest acoustical hits concert that covers the highest points of his entire 30+ year career up until the "Prairie Wind" CD ... and in the end, as if you needed a bonus, you get one of the most memorable moments ever.

Stick around through the credits as Young performs a haunting version of the obscure "Old Laughing Lady" completely alone on the stage before an eerily deserted Ryman. And I suppose this is where viewing the DVD is better than the concert itself, since apparently none of the audience got to hear this. Could this possibly be the only time he's done this particular version? Usually this song is done in sort of an upbeat country-fied form that I don't particularly care for.

Maybe so, I don't know for sure.

jkReviewed in the United States on May 15, 2008
5.0 out of 5 stars
Wonderful
Verified purchase
I have been a Young fan since my days in high school in the 1960's. This film blew me away. The songs are from a man who is realizing his own mortality. We are all growing older, especially those of us who grew up with Young. Young is singing songs about family, his daughter, wife, his father who passed away right before the concert, his dog and dreams. Growing older makes you think about all of these things and I believe Neil is looking at his life in retrospect. The filming of the concert was first rate, the band was unique and wonderful, the sound was well mixed. The songs brought tears to my eyes as I related some of the songs to my own life.
Neal, if you read this, thank you for all the music you have brought into my life. I have loved most all of it. Young has not been afraid to change styles through the years and I praise him for that. He is one of a handfull from the 60's and 70's still performing and writing new material.
Bottom line, buy this video. You will watch it over and over. It's that good.
Neil has never been afraid to go where the music has taken him, from the tearing up of ol Blackie to the songs that are the little short diddies that stick in your head.
Neil is a perfectionest in his own way, hears every note played by every instrument, every nuance.

I have to rate this as one of his best. It's an album I have to watch every couple of months. It makes me smile, brings a tear and makes me wish for the time when life was so much simplier. A time we will never get back to.
God Bless you and Your family Neil. Somehow I don't think this will be the last we will hear from Neil. I don't know how it could get any better, but Neil always surprises me.
By the way, the rendition of "The old Laughing Lady" during the credits was increadable, you made the gutiar do things it was never meant to, it was awe inspiring.
The album takes me back to the better days in my life and I think in the lives of all who were here during Neils entire time spent adding so much to our lives. Music is one of life's greatest pleasures, Neil is and has always been a huge pert of that during my 58 years. What a fantastic tribute to "Daddy" also. Mine is still alive, I thank the Lord for that, but who knows how much longer, only God.
6 people found this helpful

James Hugh DruryReviewed in the United States on March 12, 2007
5.0 out of 5 stars
Boomers' Heaven and More
Verified purchase
This seems like a straight up concert movie. It isn't. There's a story here, a theme running through the movie. Redemption. Resurrection. Dealing with mortality. Reaching one's limitations and going beyond. Love. Grace and forgiveness. Friendship. Doing your best. It is all here in Demme's cleanly filmed movie. With Neil Young right at the center. Cast and crew move around him - music and life central - and the camera catches everything. Loving glances, extra wrinkles (those age-given gifts we boomers are more and more sharing), smiles, and the absolute sheer joy of making music.

When so many performers seem to sell out, take the money and run, Neil has taken our money. But he never ran from anything in his whole life. When you get Neil you get it all: heart, an sharp-edged irony, imagery that can still blow you away, and a prophetic anger that seems more pointed and more focused than ever before in his career. The protest has always been there but now it is mature and powerful.

The band is incredible and having Emmylou there is a gift. This is what music can be. Thanks, Neil, for allowing us access, no mess, no fuss, just that straight-forward honesty in the presentation that's exactly the same as the music. A lot of times directors can't find the heart or the gold. In this case, the music, the man, and the movie vibrate to the same harmonies.
14 people found this helpful
See all reviews
Back to top
Get to Know Us
Make Money with Us
Amazon Payment Products
Let Us Help You
EnglishChoose a language for shopping. United StatesChoose a country/region for shopping.
© 1996-2021, Amazon.com, Inc. or its affiliates