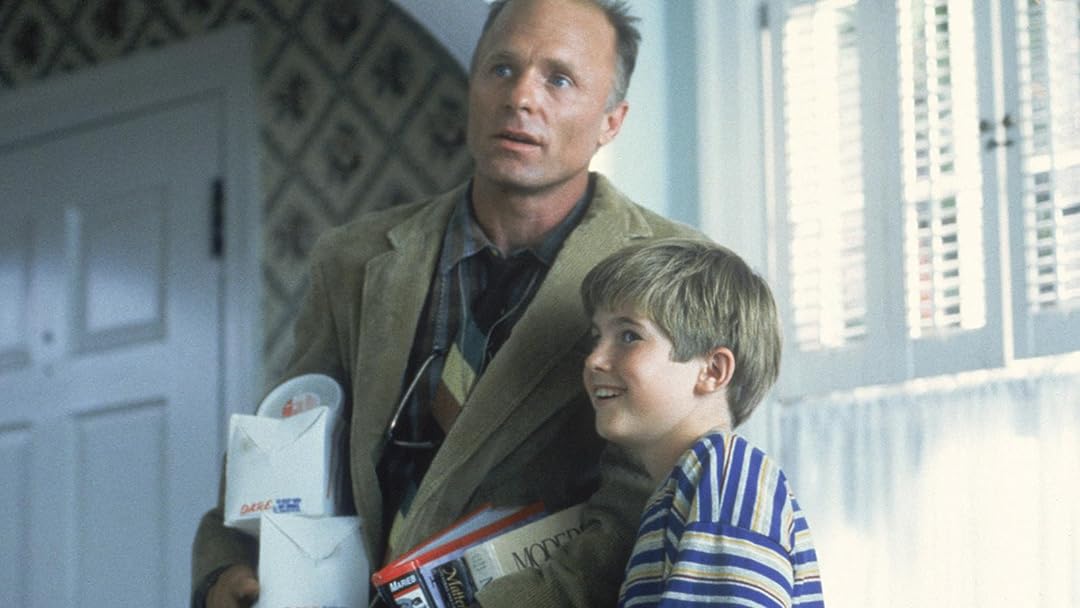 TulliaReviewed in the United States on July 27, 2018
5.0 out of 5 stars
Milk Money Goes A Long Way!
Verified purchase
Prostitutes are usually crude and dressed in a vulgar manner with lots of skin showing in very short shorts, skimpy halters, and high boots. Their makeup is heavily applied, almost in a garish manner. You need only check out any street corner in Midtown Manhattan. Melanie Griffith in "Milk Money" plays a prostitute. In essence, she is the antithesis of a prostitute. Her hair is beautifully coiffed. Her makeup is artfully applied. She speaks softly. She is smart, clever, and sensitive. And though her dress is low-cut, it is not the typical "costume" of a prostitute. You certainly have to employ the willing suspension of disbelief here. Moreover, this film was made four years after "Pretty Woman," and it smacks of elements of that film.

Three boys bike to the city to see a naked woman with a bag of over $100 in bills and coins. They are accosted by a homeless man who promises to show them a naked woman. He brings them to an underground garage and pulls a gun on them and demands their money. Nearby is a limousine in which a wealthy man is being entertained by V, a prostitute, played by Melanie Griffith. V abruptly opens the limousine door and knocks the homeless to the ground. He is knocked out cold. V throws his gun in the garbage can. The limousine takes off. The boys tell V why they came to the city. She takes them to her hotel room and gives them a look at her bare breasts. One boy, Frank, hides his eyes and does not look.

V goes to her pimp and gets into a fight with him. He tells her to stay at his apartment while he goes out on business. Instead, she takes his car and goes for a ride. She sees the three boys whose bikes had been stolen and offers them a ride back to the suburbs. Her car breaks down in the suburbs and she is forced to stay there for a few days. Frank tells his father that V is a math tutor. While V is at Frank's house living in his tree house, she sees a report on Frank's TV that her pimp had been killed. She is now afraid to go back to the city. V and Frank's father, played by Ed Harris, are attracted to each other.

Melanie Griffith is outstanding and beautiful in this film. Ed Harris is great in this film as he always is in every film he is in. Michael Patrick Carter as Frank is an excellent young actor.

Ramon VillalobosReviewed in the United States on July 3, 2019
5.0 out of 5 stars
incredible film about saving the environment
Verified purchase
Was a little distracted by the children in this film attempting to render the services of a prostitute (certainly this is not legal but she seems to go along with it?) and the love story between the aforementioned prostitute and one of the boys' father but as an environmentalist myself, I was moved by the story of one man's quixotic attempts to save a marshland from the ravages of capitalism.

Ed Harris thrills as a man almost blindly focused on his attempts to save a precious ecosystem, to the point where he ignores his own son's longing for parental guidance and criminal activities. very cute and should delight the entire family. highly recommended.

Only minor critique would be the complete and udder (utter) lack of milk in this film.
10 people found this helpful

blaine bentonReviewed in the United States on February 22, 2021
4.0 out of 5 stars
Gives me nostalgia for the '90s
Verified purchase
Interesting, feel-good movie from the '90s. The boy who played 'Frank', Michael Patrick Carter, did a great job of carrying the main storyline and I wish he had more major parts in other movies from that era. I wouldn't recommend to show this movie to young children because you would have to take time explaining what a prostitute is and so forth. There is a few poignant and tender moments in the movie which I wish there was more of in the movie. Like when 'V' (the Melanie Griffith character) is getting Frank all dolled up for the school dance and Frank looks at her emotionally and says almost with tears "so this is what it's like to have a mom". We learn at the beginning of the movie that Frank's mother passed away when he was a baby. Even though I just rented the movie, I would recommend adding it your collection. From what I understand, the DVD does not contain any special features unfortunately.
2 people found this helpful

AnnaReviewed in the United States on October 26, 2021
5.0 out of 5 stars
Its a heartwarming lesson about seeing people beyond what they appear to be
Verified purchase
I started this movie and quickly was like... oh no... but then as the movie went on and they show the woman as someone with deep fears about her job and a desire to just be genuinely loved by someone, it is very heartwarming to see a man value her beyond what she did for a job. The reality of prostitution is it is more often than not, a job that women or girls are forced into or forced to stay in (hence the man trying to hunt her down because he wants full control of her life and money). These women still have the same value as any other woman and deserve to be rescued and brought back into a second chance at a normal life. Great message.

TigerlillyReviewed in the United States on July 11, 2018
3.0 out of 5 stars
Uneven
Verified purchase
I wish all of this movie were as good as those moments when it was tender, moving, or just original and funny. Other parts - usually involving Melanie Griffith and her hooker storyline - were cliche and phoned in. Mirroring this, the sound was incredibly uneven; In some parts I could barely hear it with the volume all the way up, and other parts it was too loud. If all the parts of this movie had been as good the good parts, I would have rated it 4 or 5 stars. This just didn't get there. Side note: The boy who plays Frank is really touching to watch; his face shows such emotion..
5 people found this helpful

TuesdaysWithMReviewed in the United States on September 2, 2018
4.0 out of 5 stars
Change of Rating System?
Verified purchase
This was PG. I remember watching it as a kid. I discussed afterwards some of the other titles we'd watched as a kid (PG) rated that in today's society would be considered inappropriate. I mean the hooker with a heart of gold story is ridiculous. I know there are some reviews on here that said it definitely wasn't a kids film. It's a coming of age tale...unsupervised boys doing extreme things that before may have come across as a feel good family film is now considered creepy and inappropriate. I like the movie. I liked it when I was a kid and I still do. No it doesn't have the best plot or anything, but its an entertaining film.
2 people found this helpful

Keith RogersReviewed in the United States on May 30, 2022
4.0 out of 5 stars
Much Better Picture
Verified purchase
This DVD is a replacement for the VHS that was worn out years ago. The picture is improved over what the VHS was even when brand new. The story line is still there, but would not be taught at the elementary school level these days.
See all reviews
Back to top
Get to Know Us
Make Money with Us
Amazon Payment Products
Let Us Help You
EnglishChoose a language for shopping. United StatesChoose a country/region for shopping.
© 1996-2022, Amazon.com, Inc. or its affiliates