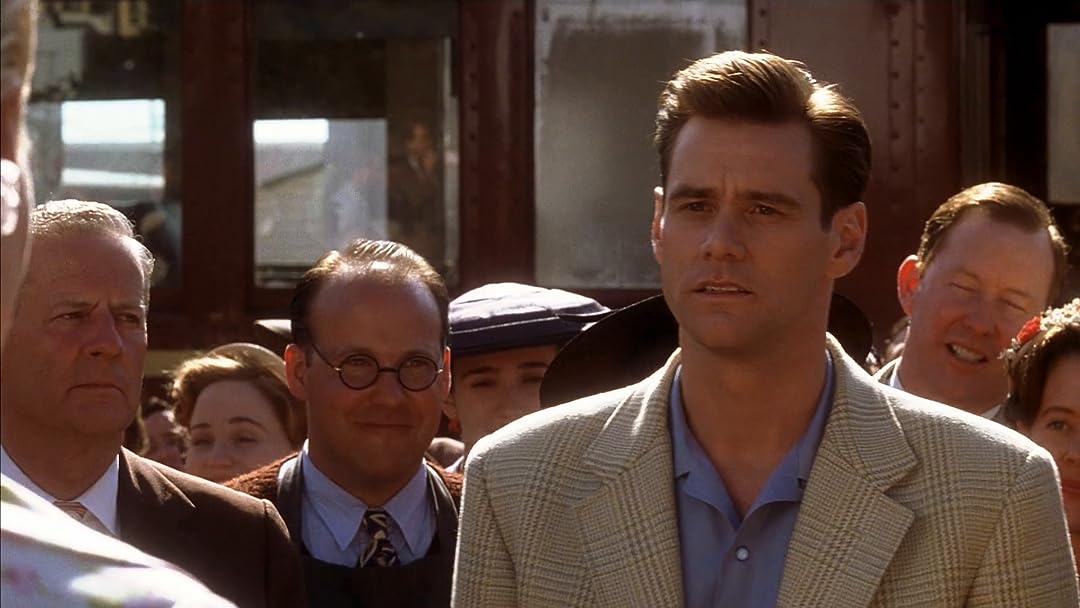 (1,709)
6.92 h 32 min2001X-RayPG
A young Hollywood screenwriter loses his job and sets off on a trip up the California coast without plans to return. The writer finds new courage, love and the power of his convictions.

Bratty AnnReviewed in the United States on October 7, 2019
5.0 out of 5 stars
Is He or Isn't He?
Verified purchase
This is one of my most favorite Jim Carrey movies. Slammed by critics, I have no idea how they could have missed this charming tale. Taking place during the Blacklist period in Hollywood, after Jim Carrey's character has an accident, he ends up in a little town who had lost many of their young men to the war. Carrey resembles one of those men and is taken in by the town, creating the healing that hadn't happened before. Happy that someone's son returned, the entire town comes together to begin to live again through the joy of a returning son. Or is he? Eventually, that question has to come up - and does!
9 people found this helpful

NemeseosReviewed in the United States on October 26, 2017
5.0 out of 5 stars
This is Jim Carrey's BEST movie!
Verified purchase
This movie is, I think, the greatest movie that Jim Carrey has ever made. In every other Carrey movie you see Jim Carrey playing a character, without becoming that character. In "The Majestic", Jim Carrey became Luke, and he was that person, not Jim Carrey playing the same character he plays in every other movie he's done. It's a wonderful feel good movie that is enriching and funny. It's a movie you want to see again and again.
17 people found this helpful

Amazon CustomerReviewed in the United States on February 11, 2015
5.0 out of 5 stars
One of the BEST!
Verified purchase
This is a GREAT movie. While it didn't do well in the theaters, it is one of the most underrated movies I have ever seen. I have watched Jim Carrey since he started acting and have mostly enjoyed his crazyness...but in The Majestic and Luke Trimble, he found his perfect part. He shows us he can be honest and believable. He shows us he is an actor! And Laurie Holden played his perfect opposite. She was beautiful, silently powerful and perfect for the role. The Majestic was well written, perfectly cast with flawless acting and a setting that made it all work. This movie is one of my favorites. It shows us that we don't need constant action, explosions, graphic sex and powerful special effects to have a really good (feel good) movie. The movie plays to the heart and gives us a look at how it was and how it could be once again.
11 people found this helpful

BuckminsterReviewed in the United States on November 1, 2020
5.0 out of 5 stars
Just Watch It!!!
Verified purchase
I love this movie. It has bits that remind me of many of my favorite movies of all time. Start with Frank Capra's "It's A Wonderful Life" were the lead character discovers what is really important in life, throw in a bit of "Hoosiers" to flavor the movie with small town America, and finally add a bit of "The World According to Garp" with its interesting characters and slight political bent and you get "The Majestic". It has great message that is delivered without preaching.

I have to admit that I tear up during "the speech" near the end of the movie.

Janis HendlerReviewed in the United States on November 15, 2013
5.0 out of 5 stars
Sheer delight
Verified purchase
Not only is this one of Jim Carrey's best films, it's pure Frank Capra/Jimmy Stewart, and in a modern, cynical world, it's not easy to pull that off. The setting is the post-WW2 McCarthy Era, and Carrey is a young film writer who's about to be indicted for Communist activities even though he's only guilty of attending a "food-not-war" party while pursuing a girl during his college years. Distraught over what he knows will be the death of his burgeoning career, he drives up the California coast while contemplating his unfair fate, and is involved in an accident which leaves him with amnesia, embraced by the people in a small town that lost many of its young men to the war. Carrey resembles a local war hero, who's been MIA for nine years; or perhaps the townspeople just want to believe he's survived, and adopt this stranger into their lives and hearts. The long gone son of the man who owned the now-closed Majestic cinema also comes with a gorgeous girlfriend with whom Carrey becomes involved, but it's all sweet, never perverse. Carrey never really believes he's who the locals think he is, but he goes along with it because he brings such joy to everyone around him. The rebuilding of the theater is pure Capra and somehow manages not to be corny, as does the "Mr. Smith Goes to Washington" ending. Maybe it's because I'm a film buff and fascinated by the heroism of WW2, but I love this movie, can't recommend it enough. It seems a kicked-under-the-carpet sleeper for Carrey, and it's a pity; it's one of his best, most heart-felt performances and may enable you to forgive him for talking through his butt.
2 people found this helpful

tothemoonzReviewed in the United States on June 22, 2018
5.0 out of 5 stars
Best Family Movie Ever
Verified purchase
Re-bought this movie to watch with my 90 year old motherj-in-law. This is one of my all-time favorite movies and she said, "this is the best movie I've seen in recent memory." Sure, she has a long memory but I knew she would love it! Highly recommend this movie for all ages.
6 people found this helpful

Stacy K.Reviewed in the United States on November 4, 2010
5.0 out of 5 stars
Film historians of the late twenty-first century will wonder how so many people could have overlooked this movie.
Verified purchase
I'm sure this movie would have been more well-received if it had been released six months earlier than it was. But three months after the destruction of the World Trade Center, America was in no mood to consider the justness of war, or to question the infallibility of its Government. But the course of events in the years following its release have shown The Majestic to be far more timely than anyone could have guessed. Another misfortune that precluded critical acclaim for this movie is that few people are willing to see beyond Jim Carrey's astonishing talent for crude physical comedy, at which he is an unparalleled genius. But he is also one of the best dramatic actors film makers have ever had the good luck to discover, and his performance by itself would make this one of the best movies hollywood has ever created, and yet there's more. Each person in this movie is giving what is probably the best performance of their own career, and the movie itself is without doubt one of the best written and best filmed movies ever made.
12 people found this helpful

Dave The Magic ManReviewed in the United States on March 22, 2021
5.0 out of 5 stars
Jim Carrey's homage to Jimmy Stweart
Verified purchase
I realize that there are a lot of people who don't like when Carrey does drama. They just want to see him act like an idiot for laughs. That is their loss. Jim can do drama, and proves it here in this film. I have always loved movies about movies. ("Hugo" and "Cinema Paradiso" come immediately to mind) And this one does not disappoint.
See all reviews
Back to top
Get to Know Us
Make Money with Us
Amazon Payment Products
Let Us Help You
EnglishChoose a language for shopping. United StatesChoose a country/region for shopping.
© 1996-2022, Amazon.com, Inc. or its affiliates