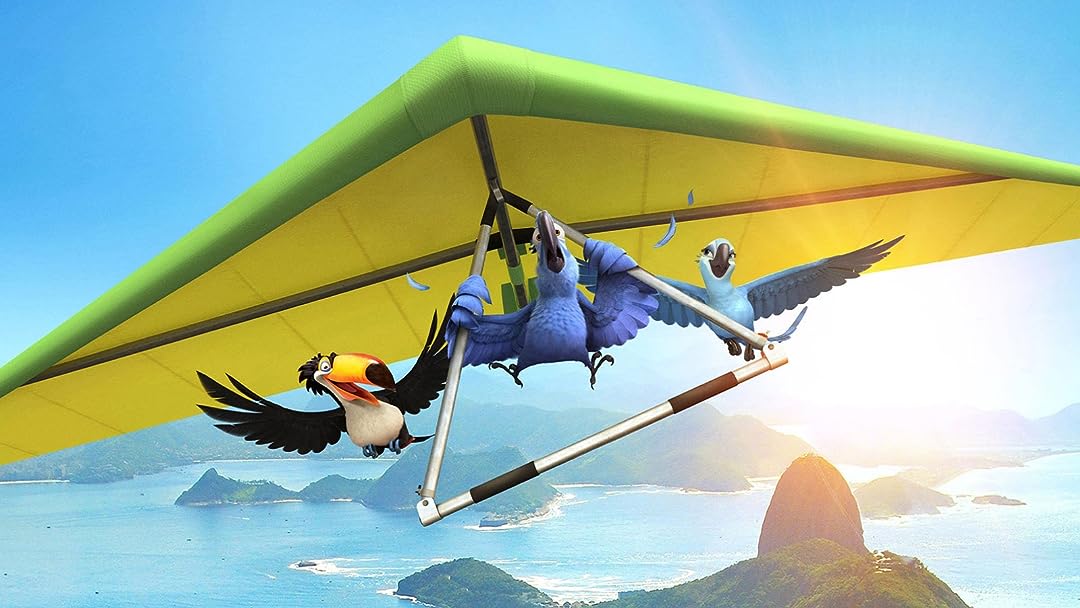 (16,244)6.91 h 35 min2011X-RayG
RIO is an animated feature from the makers of the Ice Age films. Set in the magnificent city of Rio de Janeiro and the lush rain forest of Brazil, this comedy-adventure centers on Blu, a rare macaw who thinks he is the last of his kind.

RedhallReviewed in the United States on December 23, 2017
4.0 out of 5 stars
A Family Movie
Verified purchase
Truly a family movie. I just felt a little sad watching the story. There were two main themes that depressed me. The extinction of a species because two animals will not revive a species from extinction. The other was that the bird did not fly. I am a lover of companion birds and as a previous owner, I learned that flight is extremely important to the health of a bird. Birds that do not fly a little every day tend to be fat and depressed. This leads to premature death or illness. Even with the flight feathers trimmed they can still fly in a manner. So if you are or have been a companion bird owner and lover I think you will find this movie a little sad. I feel that the writers did not intend to make a sad movie so I can't give it a five. Otherwise, the film was striking visually well written and directed and the voices were wonderful. Truly something for everyone in the family.to enjoy.
21 people found this helpful

Amazon CustomerReviewed in the United States on May 23, 2021
1.0 out of 5 stars
Weak story line, lots of sexual undertones
Verified purchase
I did not care for this movie at all! We watched it with our 9 and 11 yr olds and as a parent I did not appreciate that throughout the entire movie, the goal was for the two birds to have sex because they're about to go extinct. LOTS of sexual undertones and promiscuity by all the animals. For example: in one scene when the 2 main birds are trying to break free of an entanglement, it is made to look like they're having intense sex and the onlooking birds praise the male bird for getting the girl. The villain was all about crime and theft and negatively added to the (weak) plot. (I know villains are the "bad" person in a story, but I feel it went overboard with the desire to commit crime, especially the part where they pay a young street boy to steel). The main character, Blue, does eventually build up his courage to fly on his own and the two birds eventually fall in love and have a family of their own and of course good out-weighted evil. But the whole storyline just wasn't a positive message. Partying and sex IMO does not make a good story for a children's movie. Pass this one up and find a good wholesome movie with good character development, a thickening plot and positive message for your kids.
6 people found this helpful

K HReviewed in the United States on October 31, 2018
1.0 out of 5 stars
Too "adult" visually.
Verified purchase
Didn't care for the amount of skin and attention to the female physique, obviously intentional. Makes you wonder, if the movie is intended for children, were the writers/producers pedos? Did they clean up Rio 2 because of complaints about 1?
16 people found this helpful

asdfasdfasdfReviewed in the United States on November 25, 2018
4.0 out of 5 stars
AWESOME 3D!
Verified purchase
It's so sad to see the 3D version bargain basemented. But what a bargain! This is one of the highest visual achievements of home theater for ALL TIME! The Ice Age short subject that autoplays at the beginning is worth the price alone and the actual movie is really great too! I don't know this disc just has POP! Even the coming attractions for 3D blu-rays I've already seen like Gulliver's Travels looked better than I remember the actual discs looking. Really top-notch stuff. Buy! Watch in 3D only! Go back in time and buy a TV from 2016 before TVs got stupid! God what a tragedy that 3D is disappearing in favor of the emperor's new 4K clothes. TRAGEDY!!!!!
10 people found this helpful

Aminah777Reviewed in the United States on April 15, 2019
5.0 out of 5 stars
Well worth the watch!
Verified purchase
This is a great movie that I enjoy watching alone or with the kids. We've seen it multiple times and we never get tired of it. The cast is great, and the music is catchy. The storyline is decent and the film is very vibrant and colorful and every way that it can be. To anyone who hasn't seen it yet, I would highly recommend it -- not just for the kids but for the entire family!
8 people found this helpful

joel wingReviewed in the United States on June 23, 2020
4.0 out of 5 stars
Fun adventure bird movie with serious theme of how exotic animals are captured & sold
Verified purchase
Rio is an animated adventure comedy. Hearing that you wouldn’t think it would have such a serious theme behind it, but it does. The movie turns out to be about the capture and sale of exotic birds.

The start of the film is about how a parrot named Blu (Jesse Eisenberg) is captured in Brazil and sold to a woman named Linda (Leslie Mann) in Minnesota. That proves to be the main theme. Birds like Blu are taken all the time from around the world and then sold in different continents to be pets for humans.

Like any good animated movie there are plenty of characters that Blue and Jewel run into from other birds to monkeys and even a dog played by Tracy Morgan. All together they get chased, they try to learn how to fly, dance, etc. It’s all good fun in this great cartoon movie.
C

JuneReviewed in the United States on March 25, 2018
5.0 out of 5 stars
Family Movie Night Approved!
Verified purchase
Mom rates: 5 ‘This movie provides great family fun for all ages. We are a family with a teen, tween, and 5 year old. This was enjoyed by all. Funny and heartwarming a great flick for all animal lovers young and old.’

Alan H. MarkowReviewed in the United States on January 30, 2014
4.0 out of 5 stars
Colorful and Funny
Verified purchase
Rio is a beautifully rendered film that is made more spectacular with its 3-D effects. While clearly designed to delight children, it also provides plenty of pleasure for adults through its character development and clever turns of phrase. The boy-meet-girl story is told on two levels: the two rare birds -- one from the city and one from spectacular Rio -- and the two adults -- a shy, but knowing, woman who owns the city bird and a smart, but nerdy botanist who has re-located from the States to Rio in order to study the colorful birds found in the rainforest. The samba rhythms keep the music from becoming cloying and, in fact, add some fine touches.

One of the movie's best features is the menagerie (literally) of second fiddles and bit players who waddle or fly --sometimes awkwardly and other times with soaring grace. It's a cartoon, so most of the good guys are genuinely good, while the bad guys might as well be wearing black hats because their evilness is so totally transparent (even when they're pretending to be good guys). But it does bring up a good point about the illegal poaching of rare birds from the rain forests and the willingness of wealthy clients to buy them despite threats of species extinction. Rio shifts into darker color schemes when it enters the lair of the bad guys, so in case you missed the point of where bad vs. good is occurring, the film makes it perfectly clear. The villain bird is a conniving liar who always looks like he needs a bath and flies awkwardly. He's a total contrast with the good hearted birds who are both colorful and beautiful to watch

But the movie's strongest feature has to be the music, which beats with a Brazilian heart throughout the film, and provides the opportunity for some spectacular dancing numbers. My only proviso is that the film pays some obvious tribute to Disney pictures such as Lion King in its biggest number (again, Lion King comes to mind). But the numbers are well-done so you quickly forget that it's all been done before, and concentrate instead of the colorful birds and the heart-warming story. Another highly successful element of the film is its portrayal of the Carnivale parade with its gorgeous animated floats and gyrating dancers moving to the rhythm of Rio.

I saw the film in 3D, and the effects were both excellent and subtle enough to keep the film from falling into overdone 3-D cliches. It's worthwhile wearing the glasses to see this one. have a feeling that you wouldn't miss 3-D if you only purchase the 2-D Blu-Ray, but once you've seen it in 3-D there's simply no going back. On my projector/screen combo, Rio was bright and beautiful with memorable moments throughout. And since the samba beat was the glue that held it all together, a good sound system really pays off.

We never see anyone heading for the gym, but the heroine is in remarkably good physical condition for a gal from Minnesota who runs a barely successful pet store. But, honestly, who cares about such details. It's a fun movie and I can't wait to show it to my grandchildren.
13 people found this helpful
See all reviews
Back to top
Get to Know Us
Make Money with Us
Amazon Payment Products
Let Us Help You
EnglishChoose a language for shopping. United StatesChoose a country/region for shopping.
© 1996-2021, Amazon.com, Inc. or its affiliates