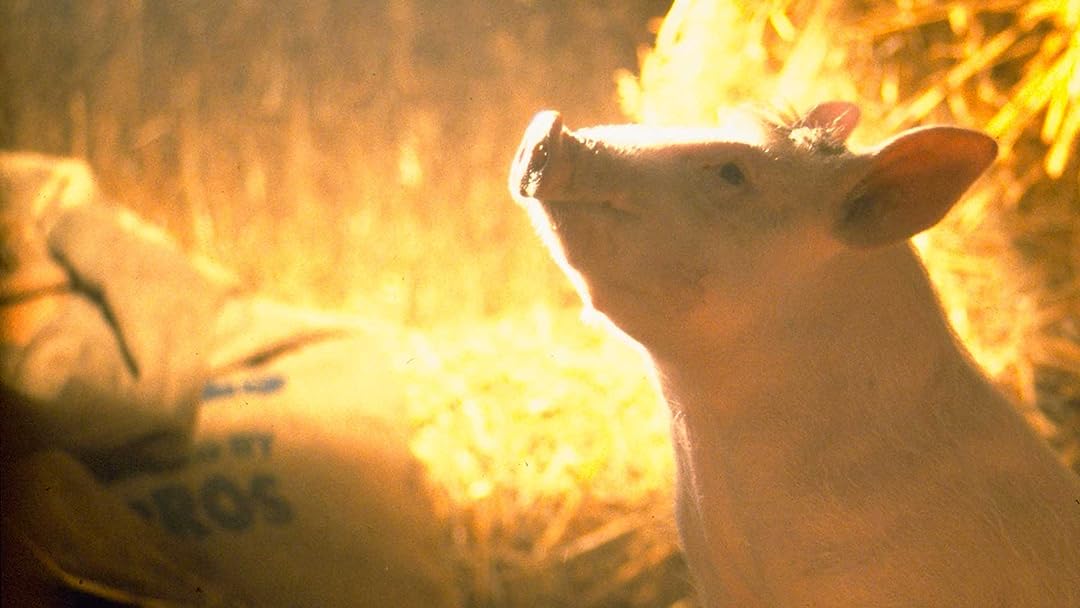 (5,750)
6.81 h 32 min1995X-RayG
That'll do pig! An eccentric little pig, raised by canines, trains to be a champion sheep herder in this classic family comedy. Oscar winner for best visual effects.

C. C. BlackReviewed in the United States on September 14, 2017
5.0 out of 5 stars
A Charmer
Verified purchase
There are so many ways this movie could have gone wrong: gooey sentimentality, awful performances, thick moralism, slipshod special effects, silly music. Happily, in my view, everything in this movie goes exactly right. Beautifully executed, this is a charming fable for kids from one to ninety-two.
19 people found this helpful

WEAK HEART 4 LIFEReviewed in the United States on August 17, 2019
5.0 out of 5 stars
Beautiful funny and heart warming film from 1995...
Verified purchase
FIRST OFF THIS IS JUST THE MOVIE ITSELF. THERE ARE NO SPECIAL FEATURES ON THIS EDITION. THIS IS FULL SCREEN WHICH WAS THE SAME WAY IT WAS RELEASED WHEN BABE WAS RELEASED ON VIDEO CASSETTE BACK IN 1995 OR 1996. I HEARD RECENTLY THAT BABE HAS BECOME A CULT CLASSIC? WOW! WHO KNEW?! BABE STARS JAMES CROMWELL AS FARMER HOGGETT. ITS NOT OFTEN THAT A REALLY GOOD FAMILY FILM COMES AROUND AND STILL HAS PEOPLE TALKING ABOUT IT NOW SOME 24 YEARS AFTER IT ORIGINALLY CAME OUT.WHATS NOT TO LOVE ABOUT A MOVIE ABOUT A TALKING PIG AND A FARM YARD OF TALKING DOGS, COWS, DUCKS, SHEEP, HORSES? I PERSONALLY LOVE WATCHING BABE BECAUSE OF THE BEAUTIFUL COUNTRY SIDE I THINK BABE WAS FILMED IN IRELAND BUT I AM NOT SURE. WITH LOTS FUNNY AND TOUCHING MOMENTS BABE WILL LEAVE LAUGHING , CRYING , AND CHEERING FOR MORE THE FACT THAT A MOVIE ABOUT A TALKING PIG AND HIS FARM YARD ANIMAL FRIENDS HAS REACHED OR HAS BECOME ALMOST A CULT CLASSIC NOW ALMOST 24 YEARS AFTER IT WAS RELEASED IS AMAZING!.IF YOU HAVE NOT SEEN THIS AMAZING FILM YET CHECK OUT BABE YOU WILL NEVER THINK OF PIGS THE SAME WAY AGAIN. FULL SCREEN THE VERSION OF BABE WITH THE PINK COVER HAS NO SPECIAL FEATURES. IF YOU WANT SPECIAL FEATURES MAKE SURE YOU BUY THE FULL SCREEN SPECIAL EDITION WITH THE BLUE COVER. AND YES BOTH VERSIONS HAVE ENGLISH SUBTITLES.
3 people found this helpful

Ricky M.Reviewed in the United States on December 5, 2019
5.0 out of 5 stars
Movie with a lot of meaning
Verified purchase
I remember watching this movie as a kid. At the time I enjoyed the movie because of its entertainment purposes of a talking animals. Now i'm 22 years old and looking back at this movie you realize just how much growing in this world or growing up in general really opens your perspectives on life. The Morals behind this story truly are beautiful and i'm glad I was able to watch this movie as a kid even if I didn't understand the meaning behind the actions of each character at the time.
6 people found this helpful

samanthaReviewed in the United States on January 28, 2021
5.0 out of 5 stars
GREAT Family movie!
Verified purchase
If you love animals and you are searching for a family movie, this is it!! I've finally discovered why I, a middle-aged woman, gets so emotional when I view this film. It is because the movie is loaded with life lessons -- don't put yourself into a box, don't judge a book by its cover, follow your intuition, disregard the opinions of others, help those who cannot help themselves, et cetera. It's just a GREAT family movie!
3 people found this helpful

jshanReviewed in the United States on December 24, 2019
1.0 out of 5 stars
Not at all as advertised
Verified purchase
Not only did this movie take way longer than expected to arrive it's not even a new movie though it was advertised as being new in unopened package. It has fingerprints and scratches on it. And was open when I received it. Its the night before Christmas Eve and I have to wrap it , I don't know if it will even play or not. If it had gotten here sooner i would have been able to make sure it would play. This is our family movie for Christmas night and don't have time to get another one due to traveling.
2 people found this helpful

Hamilton HayesReviewed in the United States on April 24, 2016
5.0 out of 5 stars
That I'll Do Pig, That I'll Do
Verified purchase
I Love This Movie back when I was just 5 years old when I saw this & I still do love it. To think that times have changed among us with animals & humans, but the bond between certain species makes them acceptable to society for what is deemed to live& what is deemed to be else wise. But I think our society knows every life is sacred & they choose to follow by that or not. But this little pig wither this be based a children's book or not is a great example of what we can be if we just not let out inner senses think that we are more superior to others including animals of other sorts. If they can get along with each other then so should we with them. A world with peace, is a world worth living in for every generation to be born into. I think that can be a saying that a lot can take heed into and inspire themselves to go vegan & be kind to mother nature's animals. They were here 1st so be kind to nature and do us a favor & be sacred about our animals. Especially Pigs :)
4 people found this helpful

GladysReviewed in the United States on August 17, 2018
5.0 out of 5 stars
Babe is a gifted Pig
Verified purchase
Well, as usual I used the program for my Poodle as he watches a lot of these movies and I have already seen Babe and my take was it was a vibrant happy film. All the barn animals talk in this film. Babe is a favorite with the farmer and he's determined to show that pigs are important as the rest of his animals. I found nothing I didn't like. It moves right along with all sorts of animal happenings never a dull moment. Fluffy
s
4 people found this helpful

DavidReviewed in the United States on October 29, 2015
5.0 out of 5 stars
It deserved all six Oscar nominations
Verified purchase
When I first heard that a kids movie about a pig had been nominated for multiple Oscars, including Best Picture, I bemoaned the state of the entertainment world. I had just seen Dead Man Walking and couldn't imagine a picture even being mentioned in the same breath as that deeply important, beautifully written and acted film. But when I finally saw Babe (my young children insisted), I came away completely humbled. No, it doesn't take on a question as difficult and meaningful as whether we should be killing our fellow humans. But it does address issues such as prejudice and how we treat the animals with whom we share the planet. And it takes on those topics in a manner that is by turns hilariously funny, sharply uncomfortable and greatly moving. And every element, from the script to the acting to the art direction and cinematography, is so polished and sophisticated. It all adds up to a unique film, a true original.
9 people found this helpful
See all reviews
Back to top
Get to Know Us
Make Money with Us
Amazon Payment Products
Let Us Help You
EnglishChoose a language for shopping. United StatesChoose a country/region for shopping.
© 1996-2021, Amazon.com, Inc. or its affiliates