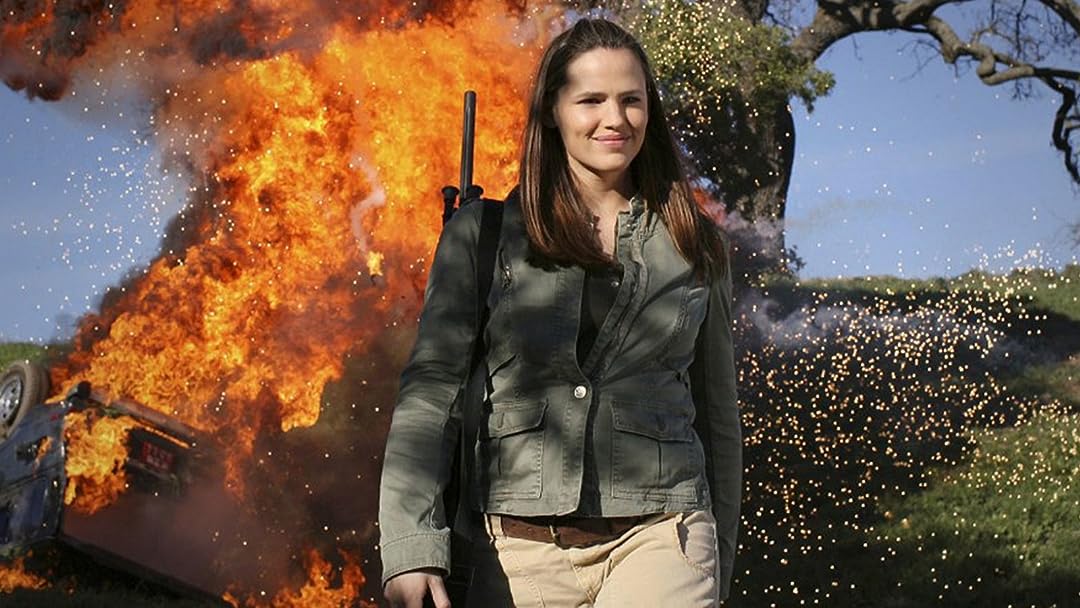 (1,813)
7.62002X-RayTV-14
Sydney Bristow (Jennifer Garner) discovers that her employer, SD6, is not part of the government but actually an enemy organization. She goes to work undercover at SD6 as a double agent, while actually working with the CIA. Her greatest ally is another fellow double agent: her father.

Rebecca FoutsReviewed in the United States on July 25, 2017
1.0 out of 5 stars
WRONG MUSIC - GET DVD's instead!
Verified purchase
First, I ***LOVE**** Alias. At least, I LOVE the first few seasons when JJ was still on board. I own the DVD's. But I finally broken down and purchased the HD digital version of Season 1 from Amazon. I had been watching the show on one of the streaming companies (Hulu or Netflix) --- but was ANNOYED to discover some of the iconic songs were missing and replaced.

Rather than having to constantly dig my DVD's out, I wanted to have the HD digital versions. I ASSUMED the music would be correct.

I was SOOOOOOOOOOOOOOO disappointed to discover that the music was replaced in the HD versions as well.

SCREW IT! I'll dig out my DVD's - and if I have to rip them illegally, I will. Because this is one show where the music MAKES the show. And the replacement's just make the scenes FLAT.

Carol LReviewed in the United States on August 26, 2019
4.0 out of 5 stars
Two sets of subtitles
Verified purchase
Because I'm hard of hearing, I use subtitles to get the full measure out of my DVD's. Unfortunately, whoever made these DVD's went overboard, and put one tiny set of typewriter print over/under the REAL subtitles. There is no way to turn off the tiny printed ones. So far, it is on season 2 as well. Wish I'd gotten round to watching it when I first purchased and I'd return it. I think it must be a defect. Anyone else had this issue? That is why it got only 4 stars, as the program is definitely worth 5+
24 people found this helpful

GeoReviewed in the United States on July 17, 2020
2.0 out of 5 stars
sillier and more unbelievable the longer it is on.
Verified purchase
Character development of the main character inconsistent finally unwatchable as the episodes are more and more undeveloped and just killing and dying, and recovery from severe injuries unbelievably quickly. Needs better writers!! The nerdy Marshall is poorly written boringly repetitive and poorly acted.
22 people found this helpful

Now that the show is over, I highly recommend this series for anyone who is looking for a binge watching worthy show. This series will keep you entertained for hours!
19 people found this helpful

Crow-ConspiratorReviewed in the United States on January 26, 2016
5.0 out of 5 stars
A Great Genre-Bending Series With Terrific Acting and J.J. Abrams
Verified purchase
Alias is an older series now with formulaic but fun episodes. It is very well acted and directed, turning what could have been a fluffy girl-spy show into a puzzle of motivations. Jennifer Garner makes her very physical role look easy. And there's always cool gadgets and a new outfit for her to wear when the attractive star goes to the club to suss out the international terrorists. (International terrorists always base their operations in clubs for some reason.) The other actors also elevate the series. Ron Rifkin is dangerous, creepy, and obsessed, always just about to discover Sydney's double-agent status. Michael Vartan plays it both uptight and cool. His relationship with Rifkin's character is far more complicated than just being another double-agent, since they have also been friends. Rifkin plays the master manipulator, who plays on people's feelings and lulls them into a false sense of trust. This is a better show than it should have been, and credit to J.J. Abrams whose reputation just grows with the body of his work. I was sorry to watch the last episode.
18 people found this helpful

AndrewReviewed in the United States on November 23, 2015
4.0 out of 5 stars
Not a True Alias fan, but I like this collection.
Verified purchase
My four stars are equivalent to the five star rating since I'm not much for fanaticism. And contrary to this statement, I am a fan of Jennifer Garner, and have three of her feature films also. I am a heterosexual twenty-something male, so it's nice to see a pretty face on the screen after having a bad day.
I was also surprised to find Mr. Bradley Cooper, and whoa, the show is a product of J.J. Abrams, the new Star Trek guy.
I used to listen to extreme metal in years past, but I've gone soft, and some of this show is dark for me, but it is thrilling. So this is Metal Jennifer Garner for me.
The season is very well crafted, but I feel it is played out too much in certain episodes, so I won't follow up with the next seasons. But that is how tv series go. It is nice how you can watch any episode in this season, because they fill you in with My name is Sydney Bristow intro. It was cool how she is a spy, then a double agent, THEN, she's part of a five hundred year old prophecy, the plot thickens; nice touch.
The soundtrack and original scores I dig. They've got Enya, 90's pop/alternative and an industrial rock thing going on, and the commentaries on select episodes are informative and insightful for the trivia buffs.
6 people found this helpful

Cali in the valleyReviewed in the United States on January 30, 2009
5.0 out of 5 stars
Entertaining!!
Verified purchase
I knew of this series, . . .never got sucked into it when it was on TV but I'm a fan of rock em sock em chick kicking butt video games, and movies. Big fan of the Buffy the Vampire series and anything deep thought provoking, but not to over my head flicks, books, and video games. I've always like Jennifer Garner. Unfortunately, the very first movie I ever saw her in was some really dorky 13 year old movie but I had the foresight to not hold it against her. That movie was pretty darn bad but I could see that she was the type of actress that had potential and was enjoyable to watch on screen. Next came Juno and Elecktra and I was really impressed with her performance there so I thought I wouldn't hold it against her that she married Ben Aflack.
So I bought the first season on Amazon, read that the director was the same director of Buffy the Vampire Slayer and pushed play. This sucked me in at the pilot and I could see what all the buzz is about. This series plays out like a live action, of course scaled down and edited version of Tomb Raider meets, Mission Impossible. I would be hard pressed to say anything bad about this, . . so far, . . I have only seen the first season. Understandibly this is Hollywood entertainment and thus has its limitations, . . will you be entertained, yes. You'll be on the edge of your seat at times saying "What the?!" Now the quirky, . . .for some reason she is always running through a hallway, . .almost like clock work during every episode there is a hallway scene. Also I do like the fact that her character is not so cold bold but she seems a little soft at times. I would like to see her a little more tough like her nemisis Ana, . . because she has such a cute pretty face it would make for better character development. This story line is very interesting pulls you in and is quite entertaining.
You gotta get it. I highly recommend it.
9 people found this helpful

C. DavisReviewed in the United States on April 26, 2006
4.0 out of 5 stars
MY SECRET VICE
Verified purchase
This plot seems completely unbelievable. Yet, every week I find myself drawn to this show. For all the impossible plot lines and unbelievable characters, ALIAS is just a great show for mindless escapism and entertainment. If you can suspend disbelief, you might find that this show is for you. Just a short survey of some of the unlikely characters in this show:

Jack Bristow was married to a Russian spy who used him for an information source in the CIA. He spent a year in jail under suspicion for being a spy himself. Yet, Jack is a trusted double agent? He works with his daughter at the CIA and SD6? Give me a break.

Sydney Bristow is the lead in the series. She is a college student turned secret agent. Despite looking like head stuck on a stick figure, she is somehow able to perform almost superhuman feats of strength, athleticism, and agility. Likewise, she is a super smart, hyper aware double agent, who never gets caught despite the fact that she wears her heart on her sleeve and is willing to break any protocol for a friend or relative.

Marshal Flinkman (sp) is the tech-guy who works at SD6 and later at the CIA. He is, to this reviewer anyway, the most believable character on the show. Despite being used primarily for comic relief and creating from scratch impossible devices, he is the only person who carries the quite confidence and energy that I would expect a real intelligence expert to have.

This review could go on and on just talking about all the weird, interesting, and unlikely characters. Sydney's mother, the evil head of SD-6, Michael Vaughn, Sydney's partner at SD-6, and more - including the cool bald guy from LOST and JAG. However, rest assured, it is entertaining.

Finally, while the show itself is a bizarre labyrinth of betrayal, plot twists, and surprise endings; it is just fun to watch. If you are looking for some mindless entertainment, you can't go wrong with Alias.
4 people found this helpful
See all reviews
Back to top
Get to Know Us
Make Money with Us
Amazon Payment Products
Let Us Help You
EnglishChoose a language for shopping. United StatesChoose a country/region for shopping.
© 1996-2022, Amazon.com, Inc. or its affiliates