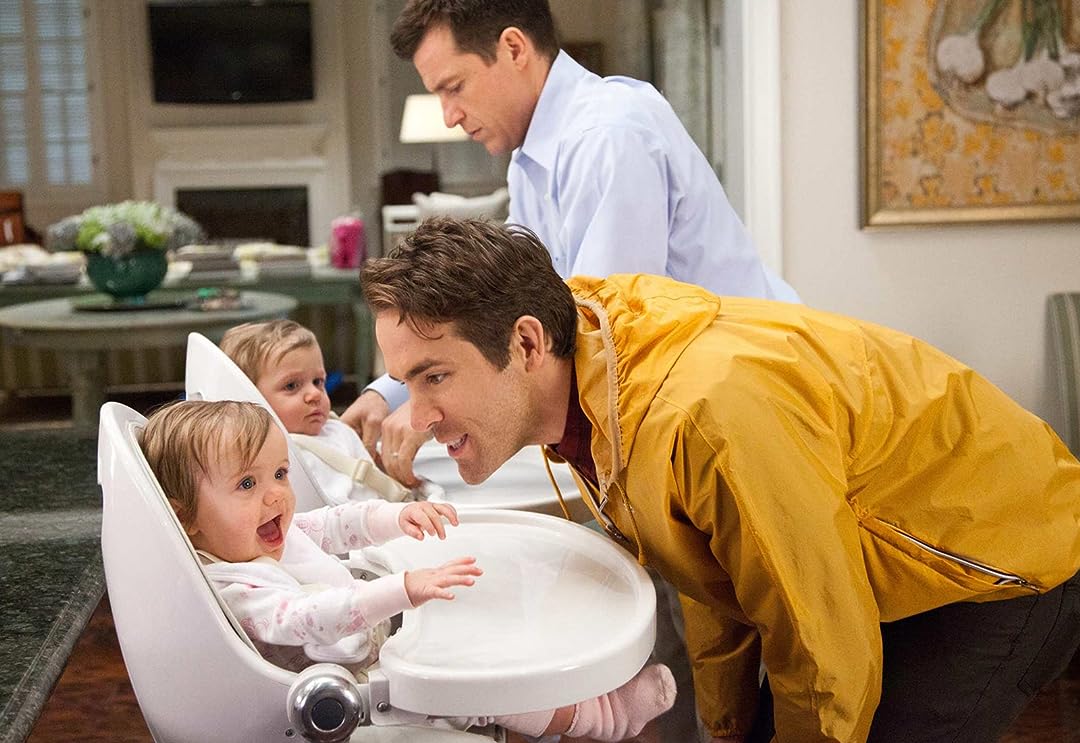 D. RobertsReviewed in the United States on June 15, 2016
5.0 out of 5 stars
Middle age was never this funny!
Verified purchase
If ever there were an introspective Romantic comedy about the proverbial mid-life crisis, then this one is it. Mitch (Ryan Reynolds) and Dave (Jason Bateman) are 2 friends who live antipodal lives. Dave is married with 3 children; his life is structured and he is well compensated as a lawyer for a major firm. Mitch, on the other hand, is single, free-wheeling, independent but has little $$ as he has difficulties finding steady employment. He wants to be an actor, but can't score anything higher than commercials & softcore porn flicks. Dave & Mitch want what the other has; Dave envies Mitch's autonomy to do whatever he pleases, while Mitch covets the stability of Dave's life.

One day, when they announce their wish simultaneously to a magic fountain, they trade places. Mitch gets to live like Dave, and Dave gets to live like Mitch. They both find out that the other person's life is not so neat & tidy & easy as they assumed it would be. One thing that is clear is that the situations are ripe for a great many laughs!!

The primary reason I bought this film was the inclusion of Olivia Wilde. After seeing her in the recent TRON movie, I was "hooked." She does not disappoint as the sultry Sabrina. Dave has always had an infatuation for her, but he's married. However......what about if he dates her as Mitch? Does that "count" as adultery.....given that he's no longer the same person? Hmmmm......what is not in dispute is that, for myself, I'm Wilde about Olvia! I am presently binge-watching her movies.

If you want a different kind of Romantic comedy, one that actually includes a married couple (whoa!) & is on the raunchy side, then this flick might be just for you. While I am not huge on bathroom humor, I will say this flick had the funniest BH I've ever seen & they didn't over-do it. If you're a middle aged fellow (like myself) then you will find this romp particularly poignant!

Jacob GoffReviewed in the United States on July 30, 2020
1.0 out of 5 stars
Worst of Both Worlds
Verified purchase
The Change-Up is based on a classic concept: two people with nearly opposite lifestyles switch and learn what it's like to actually live the lives they once envied. It's a concept for children, with a shallow and un-complex story. The Change-Up, though, adds an overwhelming adult layer of 'humor' to the concept. What do you get? A movie that's not deep enough in narrative or comedy for an adult to enjoy with humor too vulgar for any child (and most adults, in my opinion). My suggestion: get a similar experience and outcome you'd get from this movie by slamming your head in a window repeatedly until you pass out from either the pain or the concussion.
One person found this helpful

MsTerryReviewed in the United States on March 19, 2020
1.0 out of 5 stars
ugh
Verified purchase
Not really sure who the target demographic is for this one, but it's not thinking adults. The level of humor in case you're curious is "poop in mouth / thumb in ass" . Very disappointed in Jason Bateman. So great in Arrested Development. This is AWFul. This is not juvenile humor. It's ... I don't know what this is. I don't want to offend anyone by saying it's their sense of humor. ugh ugh ugh.
2 people found this helpful

AHKReviewed in the United States on August 18, 2019
1.0 out of 5 stars
Description of Movie Misleading
Verified purchase
While the movie is R rated it should have been x-rated. Filty language and sexual scenes. The description of the movie was very deceiving.
5 people found this helpful

DavidReviewed in the United States on July 27, 2020
2.0 out of 5 stars
Not good unless you just love seeing the stars of the film.
Verified purchase
I'm sorry. This movie is just bad. I am a huge fan of every actor featured here, but the star power cannot overcome the poor writing and terrible pace of this movie. Ryan Reynolds and Olivia Wilde were absolutely gorgeous, and Jason Bateman and Leslie Mann did the best they could with the parts that were written for them. Yes, I am saying that Reynolds and Wilde were only used for eye candy/set dressing. I'm not saying that Bateman and Mann weren't looking tasty, but the writing was horrid and they had their work cut out for them. Did this one get any Razzie nominations?

Mike TripoliReviewed in the United States on July 30, 2015
4.0 out of 5 stars
A great cast in a great funny movie
Verified purchase
In the genre of "trading bodies" movies, this one stands out. Ryan Reynolds and Jason Bateman are both very funny, and as silly as it is, manage to make one believe they have actually "traded" places. In one scene in which Ryan Reynolds character is in bed with his best friends wife, the acting is done well enough that you feel the embarrassment for Reynolds character coming through. The hallmark of good acting is when the viewer can empathize with the characters.

Of course, let's not forget about the women in this movie; Leslie Mann and Olivia Wilde. Leslie Mann is, in my opinion, a brilliant actress in these types of roles (she was great in "Knocked Up" and "Big Daddy" (Hooters girl)). Olivia Wilde always does a great job portraying the "serious professional office worker" with a secret - a tiny slip of a tattoo to let you now she's not "all business".

Lastly, the writer for the "twin babies" should have received an award for these two. The mischief these two get into is hysterical on its own.
4 people found this helpful

Rather be at the BeachReviewed in the United States on June 27, 2012
5.0 out of 5 stars
Change-Up
Verified purchase
This one comes with a warning.....totally, TOTALLY, inappropriate! I am SHOCKED that I like it! This is as risque as it gets for me, and I will still like a movie. Jason Bateman and Ryan Reynolds are awesomely funny, and their characters are SO WELL-WRITTEN! This movie has been done before (two people change into each other's bodies accidentally, there are LOTS of outrageously funny situations because of this, and then they change back), but RARELY has it been done so well! This is pretty vulgar but is done so exceedingly well that I have watched it a number of times with my 24 year old son. Jason Bateman is Dave, a married conservative, successful lawyer with twin babies who is trying for a partnership in his firm. Ryan Reynolds is Mitch, an immature dolt of a wanna be actor whose main goal in life is bedding every woman he can, sleeping 'til noon and having fun. One night they pee in a fountain and wake up the next morning in each other's bodies! I can't begin to explain the clever situations the writers thought of to exploit every bit of humor from this. This movie is full of surprises and laughs! Gotta love both of those, right? The supporting actors are wonderful, too. I recommend this movie!
18 people found this helpful

Amazon CustomerReviewed in the United States on July 31, 2021
1.0 out of 5 stars
Low class, potty mouth humor.
Verified purchase
Don't get me wrong. I LOVE the comedies from the early to mid 2000's. But this... this was a movie in a last ditch effort to be funnier and more outrageous than The 40 Year Old Virgin, Knocked Up, Old School, Stepbrothers, etcetera. It ends up coming off tacky and raunchy. Like REALLY tacky and raunchy. To the point where it's plain tiresome and immature and gross. Skip it.
See all reviews
Back to top
Get to Know Us
Make Money with Us
Amazon Payment Products
Let Us Help You
EnglishChoose a language for shopping. United StatesChoose a country/region for shopping.
© 1996-2021, Amazon.com, Inc. or its affiliates