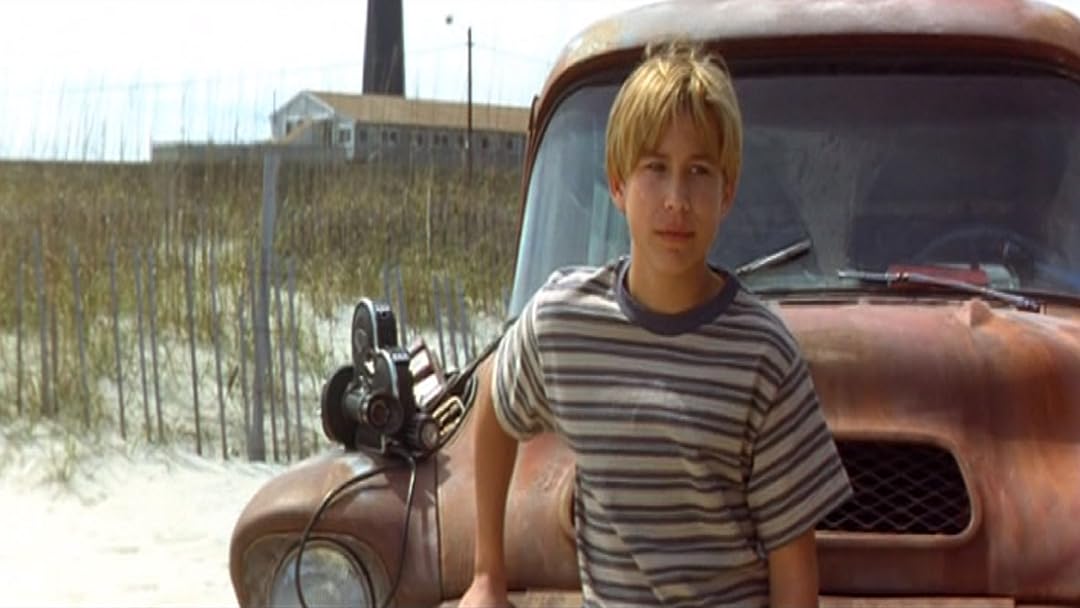 A. FortuneReviewed in the United States on August 26, 2019
4.0 out of 5 stars
Great for older kids
Verified purchase
Ok, I love this movie but it's not until you have kids that you realize how much profanity and sexual content is in older movies. Sigh. I almost turned it off. Really not appropriate for kids under 14. I give it 4 stars because of the underlying content (the bigger picture) of your dreams taking you on a bigger future. Great adventure and funny scenes!
9 people found this helpful

Amazonfan2012Reviewed in the United States on April 28, 2019
5.0 out of 5 stars
Good classic movie
Verified purchase
I saw this movie when I was about 8 or 9 years old. I remember (Johnathan Taylor Thomas) from my favorite show Home Improvement and the Disney movie I'll be home for Christmas among others. This movie is funny, adventurous, some action, and just over all fun to watch. I wouldn't recommend it for little children but anyone 8+ should be okay. It has some scary animal scenes. It has a good moral to the story about not giving up on your dreams though and I like that. I would recommend this to others.
5 people found this helpful

Kindle CustomerReviewed in the United States on January 29, 2020
4.0 out of 5 stars
Re-Released copy DTS 2.0 (NOT GOOD)
Verified purchase
Updated: We received a replacement and the audio on the second copy was MUCH better. Very pleased. The only thing that could make this movie better was if it was higher quality audio.

This review is based on the product itself. It re-released 1/28/2020 on Blu-ray. The copy we received is DTS 2.0 which makes it sound like it is in an echo chamber. Very disappointed. I am going to try an exchange first to see if we got a faulty product. If so, I will update my review.

(As for the movie itself, it is a great fun-filled family movie. My kids watched this all the time growing up until we loaned it out to someone and never saw it again. As teens, they loved getting to watch it again despite the horrible audio.)

Ronda SwolleyReviewed in the United States on August 10, 2016
5.0 out of 5 stars
great family oriented action movie
Verified purchase
I remember watching the television show Wild America with host Marty Stouffer years ago with my father - and then with my kids. The show itself was hilarious while being informative and educational. Watching this movie was nothing like watching the show, but it was sure fun to see one person's point of view on the activities that led up to the conception of the show. Not to mention this was an absolutely hilarious action film - which most of the action films I get are just that - action - and don't often have that comedic component.
Fun for the whole family, especially if you like movies with kids, animals, action, danger, and humor.
I would suggest that if you have any kids that might need a 'don't try this at home' warning you give it to them before letting them watch this show or you might find yourself fishing your kids out of horse tanks full of water with homemade hang-gliders strapped to their back, though I will point out that the narrator (who is the one forced to attempt most of the dangerous behavior by his older brothers) clearly states that he wouldn't do it if they didn't make him...

Happy Down SouthReviewed in the United States on July 6, 2015
5.0 out of 5 stars
GREAT FAMILY MUST HAVE MOVIE - ESPECIALLY IF YOU HAVE ADVENTUROUS BOYS
Verified purchase
Love this movie. A large part was filmed right over my Daddy's farm and in one spot, only because we look very closely for landmarks that we know, we even saw Daddy sitting outside his garage. Daddy had to let them cut down a tree to film some of the plane landing scenes and our neighbor got a whole new, fancy barn out of the movie. It was great fun watching parts of the movie being made, and we were happy that it's such a good, family movie. Get it, it's fun for the whole family and not a wasted moment.
11 people found this helpful

Peter Smith a.k.a I Love the Butler BulldogsReviewed in the United States on August 1, 2013
5.0 out of 5 stars
Belated birthday gift to myself!!!!!!!!!!!!!
Verified purchase
"Wild America" is one nice little movie that didn't seem to get enough of it's respect. I have Always wanted to have this movie in my collection. I remember when my family and I first rented and watched it as a VHS video back when I was 10, and the ending of the movie had me crying. I just wish that there could have been a sequel to this movie. It was a great adventure / coming of age movie. I'm not so sure how this movie did when it played in theaters or if it even made it to theaters because I don't even remember it being played in theaters. I have been searching for this movie to rent or buy but none of my local DVD retailers carried it anymore. I even checked my local library to see if it was available and even with movies on demand from my authorized cable TV service but nothing. After visiting my aunt and uncle in Montana two summers ago, I have decided it was time for me to buy my own copy. I'm glad I did. Now, Does anyone know where I could find a director's cut version of it because there were some songs on the CD soundtrack that were NOT used in the movie itself? I received my DVD at my house on Thursday August 1,2013 and it has played with no problems!!!!!!!!!!!!!!!!!! Thanks Amazon!!!!!!!!!!!!!!!!!!!!!!!!! Peter Smith

Avid ReaderReviewed in the United States on January 14, 2012
4.0 out of 5 stars
This film is based on true events.
Verified purchase
I forget that this film is based on truth. I like that Devon Sawa plays the brother of JTT's character. Those two were big teen hearthrobs in "my day." BUT I was obsessed w/JTT ---this film is really cute and inspiring. Small town kids that go off & end up living out their big dreams of being professional videographers for companies such as National Geographic, etc..The movie explains it better... what I love most about the film, is the way JTT plays his character, who gets crapped on often by his older brothers. But JTT's character is the endearing, can't help but love him sort. He's the glue between the brothers, the only one with his head on straight. I like the fact that the brothers share a comradary, despite their crapping on JTT's character..I like the adventures they go on, and... how in the end, they come home with an amazing story to tell their small town, etc. It's old, and the budget couldn't have been too too high since some of the special effects with the animals were...mmm.. hoaky, but---dude, the movie is worth the watch, at least once or twice---but again, it's based on a true story, and I find it inspirational. JTT's character is endearing and loveable, you just love him in the film. Go check it out.
2 people found this helpful

FirelilyReviewed in the United States on January 13, 2021
5.0 out of 5 stars
Worth watching and an unforgettable journey!
Verified purchase
Great movie! Definitely action and drama, along with some comedy. If I had to pick a movie title that it's comparable to, I would say Goonies (for the adventure), Second hand Lions (for the timeline). I could also say it was along the lines of Journey of Natty Gahn (for timeline and adventure). Well worth the money! It is an older movie, but one that keeps you interested the whole way through.
See all reviews
Back to top
Get to Know Us
Make Money with Us
Amazon Payment Products
Let Us Help You
EnglishChoose a language for shopping. United StatesChoose a country/region for shopping.
© 1996-2021, Amazon.com, Inc. or its affiliates