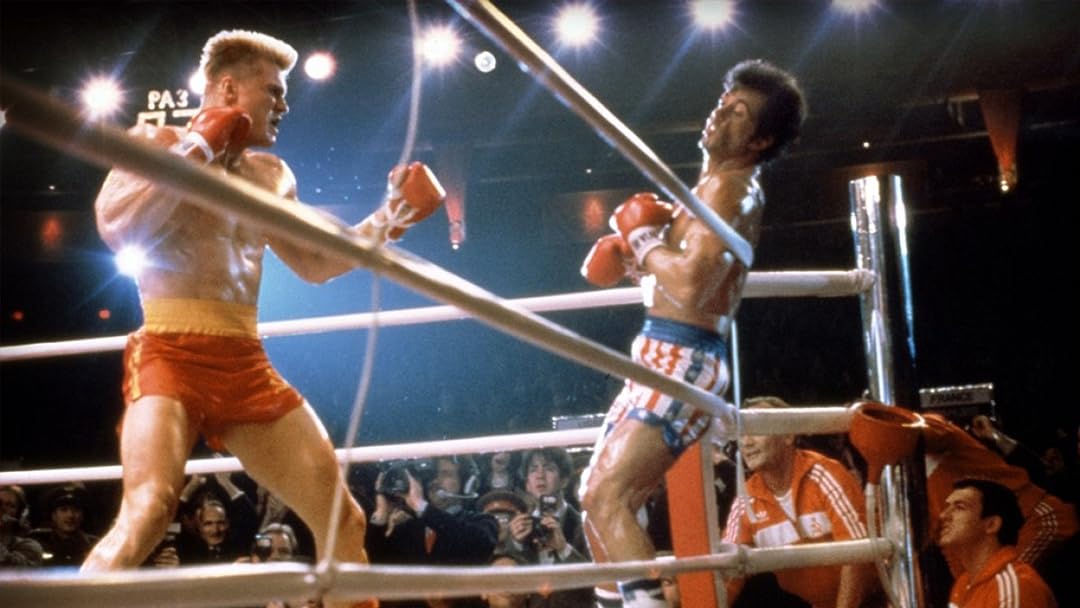 (4,869)6.91 h 31 min1985X-RayPG
HD. Rocky (Sylvester Stallone) wages a war of revenge in the ring against hulking Soviet superstar Ivan Drago in this sequel.

Aaron K. PieperReviewed in the United States on July 20, 2020
4.0 out of 5 stars
Better than Rocky 3 -- but please stop spoiling plot points in the tagline!
Verified purchase
I loved Rocky 1, liked Rocky 2 and was indifferent to Rocky 3. I had no plans to watch Rocky 4 until one of my friends told me it was their favorite, and I'm glad I watched it! A great installment which resurrects some of the spontanaeity and wackiness of the first film.

With that said, I'm frustrated that it's absolutely impossible to avoid spoilers when purchasing/renting/browsing shows on Amazon Prime. If you're summarizing Rocky 4 for a friend who hasn't seen it, would you reall tell them "Oh yeah! Rocky Four! That's the one where Drago kills Apollo Creed in an exhibition match, and Rocky flies out to to Russia to defeat him in a 15-round match!"

Amazon's tagline spoils the entire movie, it's just the worst thing ever. No part of that should be in the tagline. How about this instead, "Rocky Balboa proudly holds the world heavyweight boxing championship, but a new challenger has stepped forward: Drago, a six-foot-four, 261-pound fighter who has the backing of the Soviet Union."

Jeremy J ClarkReviewed in the United States on August 18, 2018
1.0 out of 5 stars
One of my favorite terrible films of all time.
Verified purchase
“When I consider the small span of my life absorbed in the eternity of all time, or the small part of space which I can touch or see engulfed by the infinite immensity of spaces that I know not and that know me not, I am frightened and astonished to see myself here instead of there, now instead of then.”
~ Blaise Pascal
4 people found this helpful

J.CulpepperReviewed in the United States on May 2, 2021
1.0 out of 5 stars
Audio quality very poor
Verified purchase
Purchased the movie... one of my all time favorites. I would like a refund due to the poor audio quality. The tv volume turned to max and could barely hear it. None of the other movies I’ve purchased does this.

Zebra3Reviewed in the United States on June 8, 2018
5.0 out of 5 stars
Rocky IV blue ray
Verified purchase
This is a good Rocky movie came out in 1985 and definitely blue ray recommended! Had this on VHS then dvd and this time on HD blue ray and it sure is an upgrade on picture and sound quality. The 2 disc combo comes with a dvd and perhaps you can use the dvd on your portable players to go or to lend to a friend to see it and blue ray for your HD premium feature movie Viewing aspect fits directly on your home flat screen without the annoying black bars on the bottom and top screen unlike in most movie releases which I find annoying.
2 people found this helpful

Rose BurnhamReviewed in the United States on July 21, 2019
5.0 out of 5 stars
Great and so 80s!
Verified purchase
Great story plus Sylvester Stallone, Dolph Lundgren, and Carl Weathers are awesome 👍🏼❗
6 people found this helpful

Amazon CustomerReviewed in the United States on July 9, 2015
4.0 out of 5 stars
Enjoyable despite it's flaws.
Verified purchase
Let me start out by saying something important: This is NOT a good movie.

Having not seen any of the films (I know, I am truly not American) I can say that there is something about this that makes for a good party movie. But it could be some of the following:
- It only has 30 minutes of dialog the entire film (there is more time dedicated to montages)
- It is so patriotic it hurts (Just look out for Apollo Creed's outfit)
- Rocky is seen as an Icon of boxing, but Rocky fails to block a SINGLE PUNCH (seriously though, how???)
- Rocky has a robot butler that inexplicably exists
- The Flashback scenes with Apollo Creed
2 people found this helpful

AgbazeasReviewed in the United States on February 17, 2020
1.0 out of 5 stars
The scenes and the voice were not lined up.
Verified purchase
The voice and the scenes were totally displaced. We rent this for $3.99 and the voice and the scenes were not in the same line. I watched this movie when I was young and wanted to share that with my three children, my wife and it was a disaster tonight. A refund will be greatly appreciated.
Thank you!
One person found this helpful

PrestoReviewed in the United States on March 9, 2005
5.0 out of 5 stars
My Favorite Movie Of All Time!
Verified purchase
Rocky IV has been my favorite movie since 1993. I got real pumped when I first heard the song "Eye of the Tiger." The main reason I like this movie is the athletic inspiration. It should inspire athletes everywhere to have heart and to never give up. The songs are good too. Rocky has lots of money in this film so he doesn't look like a bum. Sly's eyes don't look real droopy and they're evened up. Each one of the athletes look sharp in their suites at the press conferences. I like Rocky's house and car, the robot, and Apollo's patriotic robe and hat. James Brown did a good job singing. I like everything in the entire movie. The entire setup is real professional to please the audience. Not only do the actors look good but everything else does too. Rocky does a fantastic job training in Russia. Drago was in fantastic shape also. Throughout the movie, Drago's hair is well fixed, but after he fights Rocky for a couple of rounds, his hair's a mess! The fight in Moscow and everything else is fun to watch. Like Bill Baldwin says in Russia, "There's no technique, no strategy. This is just a streetfight. It's a question of who wants it most". The entire movie is a patriotic and athletic inspiration.
5 people found this helpful
See all reviews
Back to top
Get to Know Us
Make Money with Us
Amazon Payment Products
Let Us Help You
EnglishChoose a language for shopping. United StatesChoose a country/region for shopping.
© 1996-2021, Amazon.com, Inc. or its affiliates