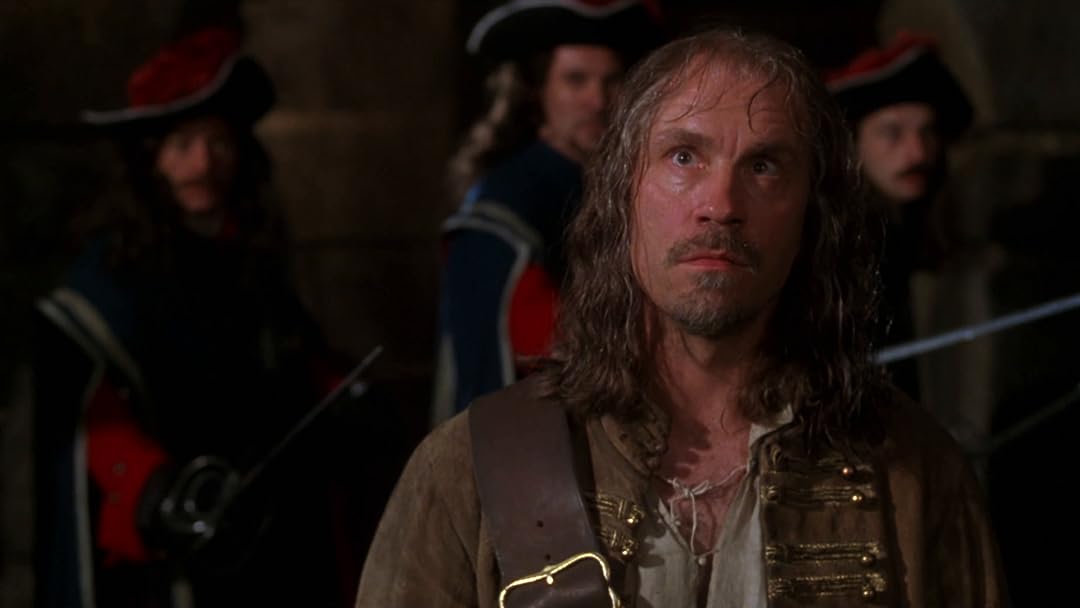 The Man In The Iron Mask

JamesReviewed in the United States on December 30, 2018
1.0 out of 5 stars
Two thumbs down for Dicapprio
Verified purchase
I had to remove one star because this movie starred Dicapprio. Then I had to remove two more because Dicapprio played two roles in the movie. I was going to restore three stars because D'Artagnan was so cool, but then Dicapprio wore that scarf... minus four stars just for that scarf.
31 people found this helpful

TDAWG107Reviewed in the United States on February 20, 2019
5.0 out of 5 stars
DiCaprio and The Musketeers Shine In A Great Adventure Movie
Verified purchase
'The Man In The Iron Mask' was released about a month after the global box office and Academy Award winning 'Titanic' in the middle of Leo Mania. In fact the weekend of it's release, 'The Man In The Iron Mask' and 'Titanic' tied each other for the #1 spot in the North American box office, giving Leonardo DiCaprio the two biggest movies in America. And although "The Man In The Iron Mask' made over $180 million dollars at the worldwide box office, it was overshadowed by the once in a lifetime experience that was 'Titanic'. Now 'The Man In The Iron Mask' is not as great and classic of a film as 'Titanic' but it is still a great and fun movie. It has an outstanding cast with Oscar winners DiCaprio and Jeremy Irons along with great performances from John Malkovich, Gérard Depardieu, and Gabriel Byrne. DiCaprio does a great job playing duel roles as the evil King Louis XIV and his good twin brother who has been hidden in the mask. As The Musketeers attempt to replace King Louis XIV with his twin: action, adventure, humor, and great drama ensue. Overall great acting, great costumes, great set designs, and a whole lot of fun lead to a wonderful film that can be watched over and over. All for one and one for all.
11 people found this helpful

RDDReviewed in the United States on September 13, 2021
5.0 out of 5 stars
Great 1990s Costume Drama in a New Edition!
Verified purchase
Randall Wallace’s 1998 film, “The Man in the Iron Mask,” adapts elements of Alexandre Dumas’s 1847-1850 novel, “The Vicomte of Bragelonne: Ten Years Later,” the final book in the D’Artagnan Romances series that began with “The Three Musketeers.” The film sees the four Musketeers – Aramis (Jeremy Irons), Porthos (Gérard Depardieu), Athos (John Malkovich), and D’Artagnan (Gabriel Byrne) – later in life, with Athos’s son Raoul (Peter Sarsgaard) hoping to join the group. Amid romantic intrigues, the Musketeers infiltrate the Île Sainte-Marguerite prison and free a prisoner wearing an iron mask. They discover that he is Philippe, King Louis’s twin brother (both portrayed by Leonardo DiCaprio), secreted away so as not to conflict with Louis XIV’s claim to the throne. The Musketeers teach Philippe to act as Louis in order to replace the despotic king. The film is somewhat brooding, focusing on elder Musketeers who find their ethics in doubt with the passage of time. In this way, it works as a pseudo-sequel to Stephen Herek’s 1993 film, “The Three Musketeers,” which featured the characters at an earlier point in their lives. Bonus features on this Blu-ray include a new 4K scan, new interviews with Producer Paul Hitchcock and production designer Anthony Pratt, audio commentary by Randall Wallace, and featurettes about “Myth and the Musketeers,” “Director’s Take,” and the original behind-the-scenes look. This Blu-ray is a great way to add this film to your collection.
2 people found this helpful

GurfReviewed in the United States on September 6, 2016
5.0 out of 5 stars
Three Muskateers Come Out Of Retirement
Verified purchase
This movie is wildly underrated. No one ever said this was a Three Muskateers story, set 30 years after the original story, the three men and the fourth member are in their later years, trying to live lives of peace, when tragedy thrusts them back into action. Leonardo Dicaprio plays the ruthless, spoiled young king, who's far too immature and selfish to run a country. The Muskateers hatch a plot to avenge his horrible behavior. Dicaprio's performance is outstanding, possibly his most difficult role. The action is fun and mostly believable, and the character arcs are unforgettable.

Highly recommend this film. Directed by the screenwriter of Braveheart, and a brilliant star-studded cast, Man in the Iron Mask is a timeless masterpiece.

diane fanizzaReviewed in the United States on July 20, 2016
5.0 out of 5 stars
dumas, popcorn and chilled chardonay!
Verified purchase
Cheers! A visually gorgeous and stunningly produced version of the. Dumas classic! The powerhouse quartet of. Musketeers in mid life are thrillingly portrayed by. Jeremy. Irons. Gerard. Depardeau. John. Malkovitch and an extremely moving and romantic. Gabriel. Byrne as. D'artagnan. The young. Leonardo. Di. Caprio stars as the evil. King. Louis and his twin brother. Phillipe who is banished at birth to a monastery and imprisoned in an iron mask. Young. Leo is magnificent in conveying the spoiled. Kings ruthless selfishness and his twin brother's virtue and gentlemess. It is one of his finest early performances. The film is directed with great energy by. Randall. Wallace and the authentic and beaitiful production values convey the 17th century. French. Court with sweep, colour and majesty. It is an exciting and delicious film experience and an ideal introduction to classic. French literature for the young. It may even entice them to read. Dumas! I had not seen it in years and realized upon this recent viewing what a delightful. Gem it is. Bring out the popcorn and do not forget a chilled bottle of. Chardonay! Luv, diana
18 people found this helpful

RyanReviewed in the United States on November 25, 2018
3.0 out of 5 stars
Style over substance.
Verified purchase
As someone who enjoys period pieces and holds them to lower standards than other movies, I was surprised and disappointed by how lacking I found certain elements of the story. The visuals are great, there is some decent action, and a reasonable plot to drive the movie forward, but this is an okay movie for background noise more than a great movie to relish.
8 people found this helpful

DonReviewed in the United States on January 4, 2019
1.0 out of 5 stars
Ever wonder why actors don't watch their own movies?
Verified purchase
Watch this and you will understand why. DeCaprio phones it in, not even an attempt to fake an accent and JM as a Musketeer? You have to be kidding me. The 1977 version is far better IMO.
9 people found this helpful

Angie JohnsonReviewed in the United States on November 16, 2019
5.0 out of 5 stars
The Musketeers Uncover a Mystery, and (spoiler alert) Change History . . .
Verified purchase
The eternal battle between good and evil - it's always a joy to see good (spoiler alert) win, especially in a manner you did not see coming.

This DVD accomplishes it through action - packed drama, mystery, friendship and friendship seemingly betrayed, love, and even humor played against the historical perspective of the "Sun King's" reign, the famous Musketeers and the years leading up to the French Revolution.

Superb acting by the entire cast, lead by Leonardo DiCaprio (whom I don't even like that much), French actor Gérard Depardieu, Gabriel Byrne and John Malkovich (plus a brief appearance by "Dr. House") and a well written screen play that keeps us guessing, surprised, moved (and amused) and to very end.

I watched this video about 4 times (when it was free) and bought it (when it was no long free) when I realized what an upbeat and on-going inspiration it was going to be for me.
A terrific movie with an eternal theme . . .