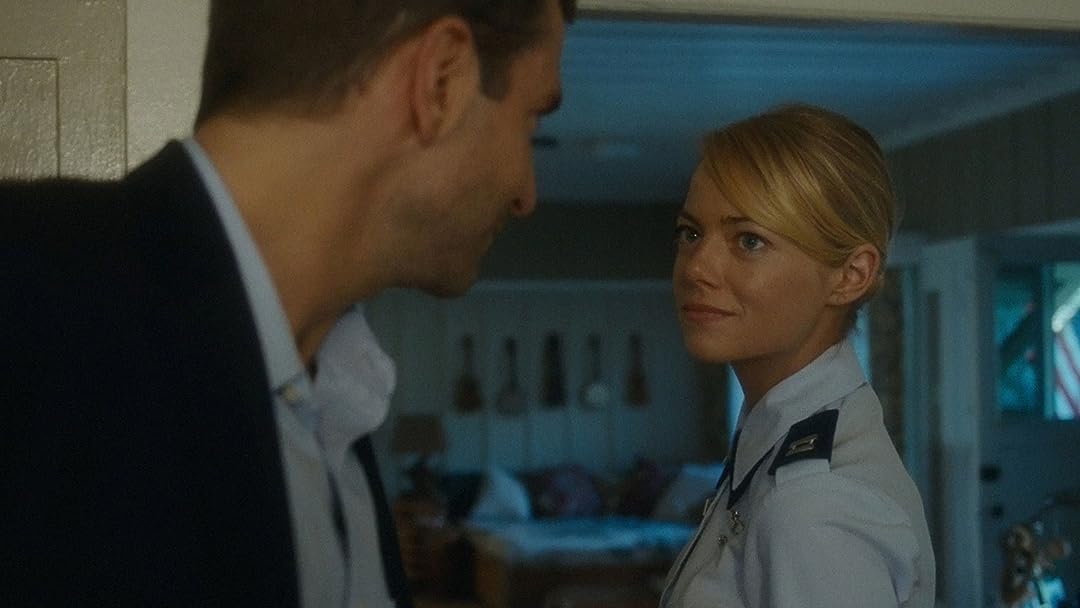 StephenReviewed in the United States on June 7, 2019
4.0 out of 5 stars
Much better than the official reviews.
Verified purchase
This movie was panned by critics, due in large part to the movie's unfinished rough cut being released by the Sony Pictures Hackers and the PC criticism of Emma Stone playing a 1/4 native Hawaiian. As a result I think a good, but quirky movie, was not given a fair shake by audiences. There is a lot to like here: Originiality, Cameron Crowe's dialogue, solid performances by Bradley Cooper, Rachel McAdams, and Emma Stone, and beautiful photography of Hawaii. Yes, at times the plot is tough to follow and the dialogue is overwritten, but if you like Cameron Crowe's other masterpieces like SAY ANYTHING, JERRY MAGUIRE, ALMOST FAMOUS, and SINGLES, you should give this one a shot.
22 people found this helpful

LilyReviewed in the United States on March 23, 2020
5.0 out of 5 stars
Powerful movie
Verified purchase
The way spirit emotion was captured here is rarely understood by an unconscious viewer, which is the only explanation I have as to why anyone would give this movie less than 5 stars.

There is a divine beauty, magic and love in this movie. Whoever wrote this, truly did have a deeper understanding of the spirit of Hawaii and its people; and was trying to raise consciousness about the ignorance of the human race.

Very very touching. And the cast was perfectly chosen.

GhostReviewed in the United States on February 22, 2021
3.0 out of 5 stars
Cliched Drivel Set in Beautiful Hawaii
Verified purchase
Three stars but only because it was filmed in Hawaii (beautiful scenery). One cliche after the next and generally poorly-acted. Cooper, the highly-talented screw-up, runs into old flame, McAdams, who is already married with teenage kids but who regularly speaks “privately” to Cooper about their past relationship in the general presence of her almost completely silent but strong military pilot husband (Krasinski). Emma Stone is the bouncy, perky, full of energy, highly accomplished fighter pilot who way overplays both the military customs and courtesies and the perkiness...to the point of being annoying or at which you’ll want to laugh...at her. The entire thing is rounded off by blowhard Alec Baldwin as the overbearing general who doesn’t like Cooper and Bill Murray, the cocky billionaire who is too cool for school. There’s even a plug in there for the native Hawaiian separatist movement lending encouragement and legitimacy to an impossible dream (hey, since you got your plug, separatists, I’m going to counter it - if you weren’t under the USA’s flag, you’d be under the flag of some other, much less benevolent power...but you’d never stand alone so give it up already and get with the program...BTW, you also wouldn’t have hospitals, education, infrastructure, or regular supplies of clean drinking water and food). Now as is usual in Hollywood, people “fall in love” within 24-48 hours of meeting, face a conflict that wakes them up to the emptiness of their self-serving lives, and receive a choice to do the right thing. Danny McBride, a colonel, brings a few laughs with his subtly sarcastic and sometimes wry humor, and of course, there’s also the Hawaiian scenery (did I mention that?). When one looks at Cooper’s performance with Gaga in A Star is Born (GREAT!) and compares it to this (drivel), one has to believe there was a sufficiently nice payday for him and nice accommodations during the shoot, which was in Hawaii (beautiful scenery...oh, yeah...you know that already). This is watchable, but it’s the kind of movie during which you can step away to get a drink, answer the phone, or greet the pizza delivery guy without pausing it.
2 people found this helpful

Terry R. MinionReviewed in the United States on August 9, 2016
5.0 out of 5 stars
Out of Thousands of Movies, This Is In My Top Ten.
Verified purchase
I've watched many thousands of movies over the years, and a large number of them are great, and I loved them. I saw a number of reviews about this movie, but watched it because of who was in it, and this movie has a solid place in my top ten I've ever watched. I've seen it at least 6 times and love it each time anew. The character and actor choices are amazing. The music is so perfect that I'm amazed how they did that. The story is grand; albeit, not necessarily real life in some ways, but engaging, entertaining, heartfelt, warm, with just enough edge. I love everything about this movie. I applaud Cameron Crowe for a masterful job, and based on the great reviews I've also seen, I am certainly not alone. I own the Blue-Ray and will enjoy it for years to come.
33 people found this helpful

MLYReviewed in the United States on September 26, 2020
2.0 out of 5 stars
Even Makes Tragedy Look So Supremely Shallow
Verified purchase
Even Makes Tragedy Look So Supremely Shallow. In an effort to mimic Wes Anderson. Warning:  this movie is very Cameron Crowe, which is fine if you crave the stuff.  It's like eating cotton candy 24/7/365, and then refusing to cleanse after.  Only a few can relate.  It never eases up, not to mention that it is also a rip-off of the quirks made hip by Silver Linings Playbook.  However, this is not great like that movie.  If you don't watch Aloha, don't worry about it.
4 people found this helpful

Jennifer McFarlandReviewed in the United States on May 30, 2017
5.0 out of 5 stars
Charming and funny
Verified purchase
I loved this movie. I was leery because of the reviews, but am glad I ignored them. Ms Pascal from Sony was off base in her assessment by about a million miles. I love Emma Stone and she didn't disappoint in this movie, but neither did Bradley Cooper nor Rachel McAdams. The supporting cast was perfect. I loved the quirky story line and found it's unfolding to be sweet, funny and touching. Plus, it was smart and beautifully filmed in Hawaii. Ignore the bad re is and give it a watch. Romance genre is not my favorite movie style, but this one made me smile throughout and laugh out loud a few times. Great movie!
11 people found this helpful

Kirsten A. SchwartzReviewed in the United States on January 28, 2016
4.0 out of 5 stars
Go for it, knowing the plot is hard to follow.
Verified purchase
We watched this film because we're thinking of movie to Hawaii for our old age and wanted to see some (we're 60 and 65). Yeah, I read the negative reviews. It's not a 5-star movie. We saw the film first, and I understand people not getting the plot. It takes some thought; it's not spelled out for you. But we followed it as it meandered from character to situation to location to character, and loved it. The scenes with the President of the Republic of Hawaii (if I got that right--it's been a few weeks since viewing) are GREAT because the man plays himself, with enormous heart and dignity. Actually, we watched a Netflix copy, and I liked it so much I bought it so I can see it again any time. All the acting is top-drawer. And Bill Murray, one of my favorites, steals every scene he's in--especially the dance scene. And beautiful views of Honolulu and Oahu: well-shot.
32 people found this helpful
See all reviews
Back to top
Get to Know Us
Make Money with Us
Amazon Payment Products
Let Us Help You
EnglishChoose a language for shopping. United StatesChoose a country/region for shopping.
© 1996-2022, Amazon.com, Inc. or its affiliates