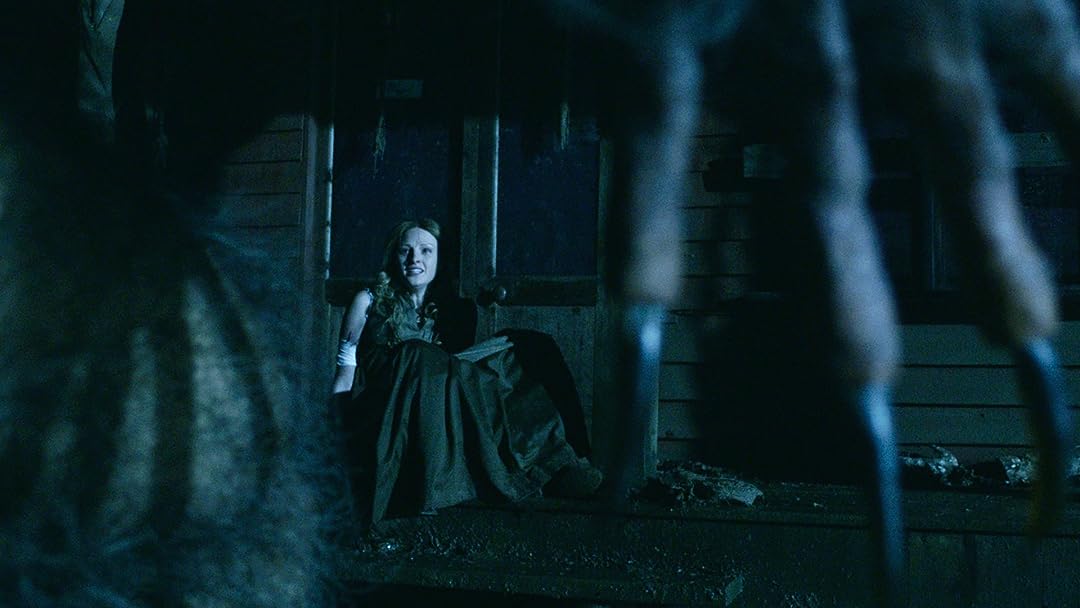 (550)1 h 25 min201513+
A stagecoach of travelers, a gunslinger and two outlaws arrive in a deserted mining town lit by the glow of a reddish full moon. As their worlds collide, they are hunted by a beast that only appears on the night of a blood moon.

Jared A. RoweReviewed in the United States on May 15, 2019
4.0 out of 5 stars
Different kind of werewolf movie set in 1877 Colorado.
Verified purchase
"Blood Moon" is not the most perfect film. It's definitely not the worst werewolf-themed movie either. The combination of the western and horror genres is what makes it work. The story is straight-forward: a couple of loathesome brothers rob a bank and escape into the woods of Colorado. A sheriff and a Navaho Indian woman with conflicting opinions regarding the existence of the supernatural set out after them. A stagecoach filled with the most unlikely combination of characters with lots of secrets pulls into a ghost town/rest-stop to find the caretaker brutally murdered. Re-enter the evil brothers, who spit and shout and want to shoot everyone, but don't. The Blood Moon rises and all hell breaks loose during one frightful night filled with terror and a good amount of suspense as the group is picked off one by one. These people are rightfully scared witless, but their tough western way of living makes them a lot grittier than the typical horror film characters we're used to seeing. (You know, the ones who don't have more than four brain cells among them, and run screaming into the night to the barn where the killer is hiding? The stereo-typical buxom blonde babes whose total contribution to the action is that they have no common sense, but are great screamers?) The people holed up in that broken down saloon know how to handle stress, guns and just about anyone or anything that pisses them off. There are a few jolts and surprisingly fewer gory scenes, but that's enough to keep the story moving along and--more importantly--to keep us hooked to a not-so-inevitable conclusion.

A great part of what makes "Blood Moon" so good is the cinematography. Most of the scenes take place at night, where the only real light comes from oil lamps. The deep shadows and low, golden illumination make for a perfect atmosphere for this kind of horror/suspense movie. The music is effective and subtle and works well with the the lighting to underscore the surrounding darkness.

The acting is often a bit uneven, but with the variety of characters and their predicaments, it's easy enough to overlook some of the flaws. Everyone pretty much gets their share of screen time so no one gets lost in the shuffle. The ex-saloon woman is tough and believable, the mysterious stranger is approrpriately low key, the newlyweds are not quite ordinary and the bank-robbing brothers are obnoxious and twisted. It's kind of a group-character development thing that keeps them all interesting and in tune with their actions and reactions. They make us like them or hate them, and that's more than you get from the typical horror ensemble.

It's not boring and it's not perfect, but "Blood Moon" is worth a view. Above all, it's entertaining and it's a refreshing departure from the over-worked norm of the horror films we're used to seeing.

EinsatzReviewed in the United States on September 25, 2019
3.0 out of 5 stars
“Don’t call for an undertaker just yet, I have other plans.”
Verified purchase
A western of sorts, in that it goes from a bank robbery to a small town without people because there’s a Skinwalker in the neighborhood. The beast in question is rarely seen and what few times it does put in an appearance it's in the dark, and only seen in part as a furry hand, et cetera. Most of the film takes place in a tavern with the two bank robbers terrorizing stagecoach passengers. Which is odd because they set up the bank robbers as utterly ruthless, having just killed at least four people before deciding to chat the few remaining survivors to death. Threatening to kill someone, repeatedly, after you’ve already killed others without a word… What a terrible, oft-used writer’s device. Put up or shut up.
I liked it up to a point, mainly because of the characters and the promise of the beast in action. This movie almost delivered on both counts.
6 people found this helpful

JonathanReviewed in the United States on December 20, 2019
4.0 out of 5 stars
Enjoyable B movie adventure
Verified purchase
I use B movie in the sense of a lower budget and production values feature, in contrast to a top Hollywood one. It's not particularly historically accurate, but what western is, and they're clearly trying to set the right tone. Even when the movie falters we can see what they were going for and it was a good effort.

The main thread of a plot revolves around two escaping bank robbers encountering some travelers at a deserted stagecoach stop. Complicating this powderkeg of a situation are the skinwalkers lurking in the woods. Things move along nicely from a film making perspective. The character's behavior and interactions mostly make sense, and when it doesn't it feels like it's in character not just bad writing or idiot plotting. Acting is mostly pretty good aside from a questionable performance by the male lead who sounds like he's doing an impression of Marlon Brando doing an impression of Clint Eastwood.

If you like Westerns, monster movies, or both, it's worth a watch. I wouldn't mind a sequel in this setting. More Weird West pls.
4 people found this helpful

Derek & MargieReviewed in the United States on April 14, 2019
3.0 out of 5 stars
Pretty good
Verified purchase
I've seen far better horrors and far better westerns but, as a mix of the two, "Blood Moon" worked pretty well.

It is 1887. A group of stage coach travelers are taken hostage by bank robbers and are caught overnight in an abandoned silver mine town called Pine Flats somewhere in rural Colorado. As night falls, as hell breaks loose as an evil Navajo spirit, known as a skinwalker, decides to kill everyone.

The budget was obviously fairly low but the set and costumes were good enough, with the exception of the skinwalker which should have seen less screen time. Even so, the creature didn't look terrible. The camera work and lighting seemed fine, although I'm no expert on these things. The dialogue was forced at times and things were said that just seemed out-of-place; 1800's Colorado Indian girl says, "heed my warning" or that the blood moon is "almost upon us"? Probably not.

All-in-all, this was an entertaining movie and I enjoyed watching it. As bad as some aspects were, and some were really bad, this was better than most werewolf movies that I've seen. (I am aware that skinwalkers and werewolves are not the same thing but they were presented, although not expressly stated, as such in this movie.)
4 people found this helpful

Randy C.Reviewed in the United States on March 5, 2021
4.0 out of 5 stars
I'm impressed!
Verified purchase
Normally when I am looking for an obscure movie it backfires on me, but not this one. I was really impressed with this, I told my wife that it was so good that I didn't care if there was a werewolf or not, it held its on as a western.
I love a good werewolf movie, or in this case, a shape shifter.

This wasn't perfect, there were some things that could have been better, but the flaws were few and far between.
The main thing that stood out to me was the characters, they were ALL very good, even the bad guys had a purpose. The female parts in this movie were all done very well also, as were the males, some were over the top just a little, but it didn't hurt the film the way I saw it. I REALLY didn't want anyone close to the end to die, I liked them all again, even the bad guys, I actually cared about them all, for a change.

The lead guy was good, but he played a character that was just a little too over the top, but the ending kind of explains the WHY he was acting that way, so it was O.K.

There were TWO really well done scenes that came out of nowhere, and no, I don't mean a jump scare, but surprise things that happened and it just flat out caught me competely off guard. I would pay GOOD MONEY for movies to catch me off guard, but they rarely do, so this was a nice surprise.

The stagecoach drivers and the people in the towns were all so well done it seemed almost real, the beginning made me like it right off.

To the writers and actors, if you read this, I LOVED IT! Y'all really did a very good job! :)
One person found this helpful

Amazon CustomerReviewed in the United States on November 21, 2015
4.0 out of 5 stars
This is a really nicely done western turned werewolf flick
Verified purchase
This is a really nicely done western turned werewolf flick. Filmed nicely, nice scenery, DECENT acting, mood setting filters all in place
really makes this something you would like to watch on a Saturday night with the kiddies. There's a couple of rough edges in the plot/acting,
but this doesn't deter from the movie being good. The creature shows up very little and THIS serves to ratchet up the tension.
Two outlaws, who are as I remember one of them saying " Be careful...I'm capable of almost anything" are the lamest part of this movie.
But the surreal setting, pretty much at night, makes for a nice watch. Doesn't get too suspenseful, keeps it a good watch for the young ones.
22 people found this helpful

Kindle CustomerReviewed in the United States on August 21, 2019
3.0 out of 5 stars
I reckon it's worth a watch
Verified purchase
Your typical 'survive the night against the horror' movie but with cowboys and werewolves. The characters were mostly decent and the acting solid, even if there was some pointless filler in the form of a side story that went almost nowhere and the characters made some downright stupid decisions. Really, worth 3.5 stars if you're looking for a decent supernatural western; indeed, among those films in the genre, this is probably one of the better.

The end does suggest a sequel but I see no indication that's in the works, which is unfortunate because I'd have been genuinely interested in learning more about the lead, Calhoun.
2 people found this helpful

NightcatReviewed in the United States on October 14, 2020
5.0 out of 5 stars
Great Werewolf, Er, Skinwalker Flick
Verified purchase
OK, let's get the obvious out of the way, the Internet is full of skinwalker legends, and I can't recall any of them making the beast wolfen. So yeah, it's a werewolf movie, more than a skinwalker one. That said, it's a very nice Western take on the werewolf legend and the acting is pretty good.

Think of a spaghetti Western with a more modern set and you've got this film where the werewolf is running about on a rampage, while the outlaws take hostages and fun ensues. Not super historically accurate as others pointed out, but it's good cheesy fun too. If you like werewolves and know what you're getting, I think you'll enjoy this one.
See all reviews
Back to top
Get to Know Us
Make Money with Us
Amazon Payment Products
Let Us Help You
EnglishChoose a language for shopping. United StatesChoose a country/region for shopping.
© 1996-2021, Amazon.com, Inc. or its affiliates