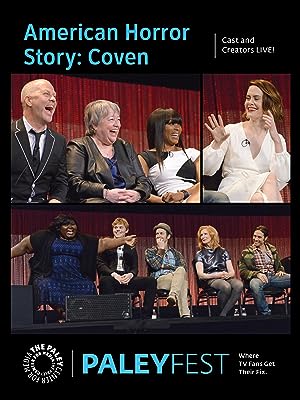 (23)
59min201513+
"American Horror Story: Coven" at PALEYFEST on March 28, 2014 A truly innovative series that has redefined how television scares us It is visually stunning and a thrill ride, but what makes it much more than a horror show is the heart-wrenching story at its core

Directors
The Paley Center for Media

The Paley Center for Media - director

OliveTheCatReviewed in the United States on March 11, 2016
4.0 out of 5 stars
Great panel, terrible audience
Verified purchase
The panel portion of this was wonderful. It's obvious that the actors and writers love what they do and love what they put out, and they're all a hilarious group of people. As a fan, watching that part was delightful.

The audience questions at the end however had to be the worst Q&A I have ever seen. There were no actual questions for the cast. It was mostly one girl begging for a job in the most cringe-worthy way, and various fans standing up and saying "oh my god, I love you" a bunch of times into the microphone. The most self-indulged crowd I have watched. A huge wasted opportunity in my opinion, and a shame considering the talent that is up on that stage.

ErinReviewed in the United States on March 9, 2016
5.0 out of 5 stars
Five Stars
Verified purchase
This was wonderful!

EllisScottPollardReviewed in the United States on May 14, 2016
1.0 out of 5 stars
Severe lack of focus.
Verified purchase
The interview is all over the place. The questions are beyond predictable and very superficial. At a certain point, it basically becomes a promotional piece for the fourth season, with the newest addition to the cast given more focus than the major players of the season being assessed. In typical Ryan Murphy fashion, his remarks take up most of the panel and attempt to give an air of worldliness to a man who doesn't have so much artistic ambition but appears to be more of an agent that wraps his cast around his little finger with brown nosing and then immediately neglecting his loyal troop and what he has tried to create (Falchuk seems to have been the brains of the opperation, with other writers and himself trying to write around Murphy's preference for visual shock factors that don't have much shelf-life narratively speaking). They don't really approach the creative elements, or, when they do, seem to approach them in the most shallow way. Little attention is given to Bassett, Conroy, and Bates, who were the most intriguing parts of the show. The interview is too safe and doesn't wander into the more interesting elements of the Coven season: racial tension, gender politics, and the other metaphorical elements that the creators tout as representations of real world issues and social anxieties. The unwillingness to address these ambiguities aren't so much artists being uncomfortable talking about their work as it is a possible revelation that the themes and concepts explored in this season were not investigated enough or thought about with enough depth that they could be meaningfully applicable to the plot. The host and creators constantly pride themselves on how this season is so female driven, but they are basically giving themselves gold stars while not really letting the great actresses on the panel weigh in (the negligence shown to Angela Bassett, whose performance rivaled Jessica Lange's, is exceedingly bothersome). Why not shed some depth on the show's fascination with iconic fashion or go into greater depth about the post-Katrina New Orleans that the world of Coven acknowledges as having importance but not showing where that importance shines through? The absence of Jessica Lange and Lily Rage leaves one wanting. Since Coven was the start of the series's downward spiral, the only thing this panel interview does is show how the creators began to lose a sense of coherence in vision, didn't know the good material from the bad, and so grievously underused their cast.
One person found this helpful

RoseReviewed in the United States on March 12, 2016
5.0 out of 5 stars
Five Stars
Verified purchase
Hysterical

christine wenchyi YingReviewed in the United States on October 3, 2018
5.0 out of 5 stars
fun interview
Overall fun interview but lack of indepth discussion for the all interesting characters on the show, which is sad coz it's brilliant. some actors weren't able to get much attention since it's a big crew.But Ryan Murphy is awesome and Sarah Paulson and kathy bates are such a delight to watch!

Yvonne KissiReviewed in the United States on August 20, 2016
5.0 out of 5 stars
Five Stars
Great cast mix! Includes BOTH African-American actresses from this season! And a "surprise" guest
See all reviews
Back to top
Get to Know Us
Make Money with Us
Amazon Payment Products
Let Us Help You
EnglishChoose a language for shopping. United StatesChoose a country/region for shopping.
© 1996-2022, Amazon.com, Inc. or its affiliates